Trainer Battles are here at last. When fans like me started playing Pokémon Go in June 2016, we asked when we could engage in player-versus-player battles.

About two-and-a-half years later, game publisher Niantic is granting our wish. Trainer Battles with human contestants are debuting this month in the popular game, giving Niantic and licensor The Pokémon International Company a chance to get lapsed players to come back.

At stake is a lot, as it could transform Pokémon Go from a casual walking game that gets you a lot of exercise to an engaging game that you can play with your friends. Pokémon Go has generated more than $2 billion in revenues and reached more than 800 million players, at last count.

“Trainer Battles have been created from the ground up for Pokémon Go under Niantic’s core principles of
social gameplay: getting players outside and exploring the real world together,” said Kei Kawai, vice
president of product at Niantic, in a statement. “From Raid Battles, to Trading and Friends, to Trainer Battles, each new gameplay feature adds an extra social layer to Pokémon Go, providing Trainers with more fun and engaging reasons to connect with others.”

Niantic will roll the social gameplay feature out in the coming days to Pokémon Go players in December, said Matt Slemon, product manager at Niantic in a press briefing. 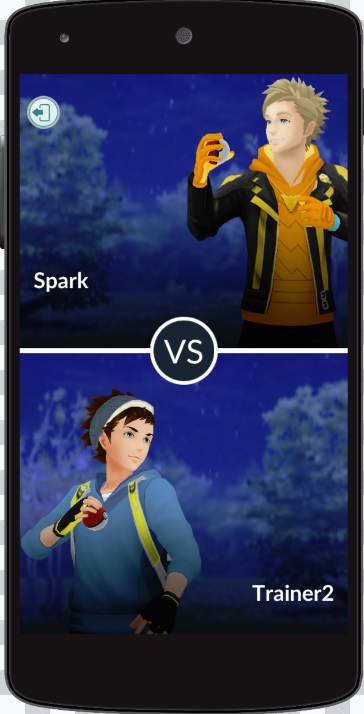 Above: At long last, Trainer Battles are coming to Pokémon Go.

Game designer Matt Ein at Niantic said in a press briefing that the team had to prioritize its friends system to build the social infrastructure for Trainer Battles, and so it had to get that done first. That social system boosted active users by 35 percent.

“We wanted to lay the groundwork for real world social interaction between trainers,” Ein said. “As a result of the Friends System, players know how to meet with and engage with other players in the real world.”

On top of that, Ein said, the team wanted to get it right because it is such an important feature.

How to fight Trainer Battles 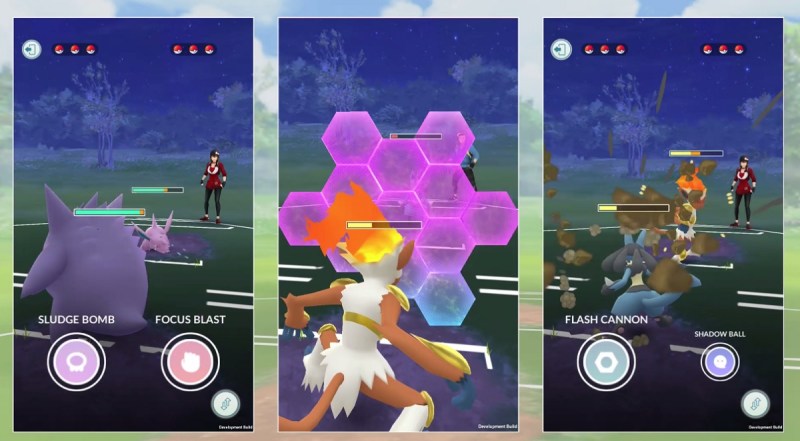 Above: Pokémon Go Trainer Battles can take place in person or remotely with close game friends.

Of all of the new social features, Trainer Battles will likely be the most intense. You can start the matches by playing a friend in person, using a Battle Code (it’s a QR code) invitation system to make the connection.

You can also play with someone else anywhere in the world so long as you have become close friends in the game by regularly sending gifts to each other. That friendship level has to reach the Ultra Friends or Best Friends level in order to permit the long-distance Trainer Battles.

Then you select your custom Battle Party, which consists of three Pokémon from your collection. After you have done that, the match starts and you fight in real-time battles against another Trainer (a human player). You can also battle non-human Team Leaders for practice.

“They just dragged on over time,” he said. “By going to 3-versus-3, the battles are quicker, and each individual Pokémon becomes much more important.”

If you have ever fought a battle in a Poké Gym, you know how to fight. In those battles, you try to take over a Gym location in the real world by pitting your creature against the Pokémon guarding the Gym. You tap the screen and try to knock the other Pokémon unconscious and take over the gym.

Trainer Battles are similar, and they last around four minutes. Niantic didn’t want matches to go on for 15 minutes or 20 minutes because that would disrupt some of the point of the game, of getting out and walking around, Ein said. But there are some new elements to the battles.

“We wanted it to be easy for casual and hardcore trainers to get started, regardless of experience level,” Ein said. 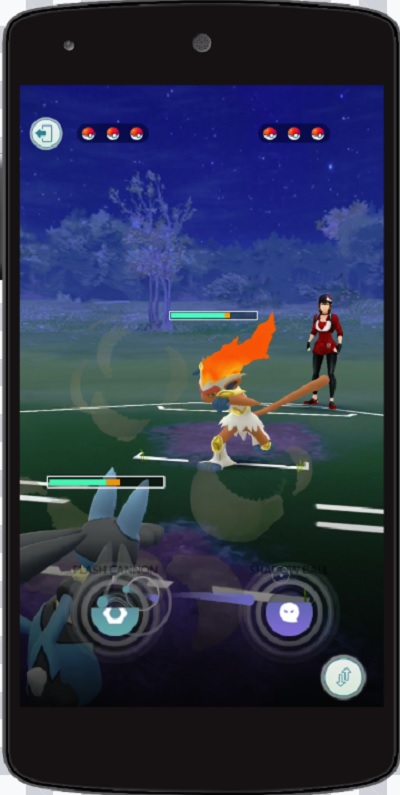 Above: A Pokémon Go Trainer Battle.

Trainers will be able to unlock a new Charge Attack for all Pokémon, adding a new strategic element to the game. In addition, a new Protect Shield mechanic has been introduced to give players an opportunity to defend powerful attacks in a Trainer Battle, if timed right. These attacks can be used in the Gym Battles and Raids, once a player has unlocked them.

Slemon said the Trainer Battles are just the beginning of dynamic social gameplay mechanics that Niantic will introduce over time.

To encourage fair and fun competition between Trainers, tiered Battle Leagues will put a maximum cap on participating Pokémon’s strength to keep the playing field even. After a Trainer Battle concludes, both Trainers will receive a prize, including a chance of getting rare Evolution items that work on certain species of Pokémon.

Originally incubated within Google, Niantic spun out in 2015 with investments from Google, The Pokémon Company, and Nintendo, and raised an additional $200 million in financing in 2017 from Spark Capital, Founders Fund, Meritech, Javelin Venture Partners, You & Mr. Jones, and NetEase. 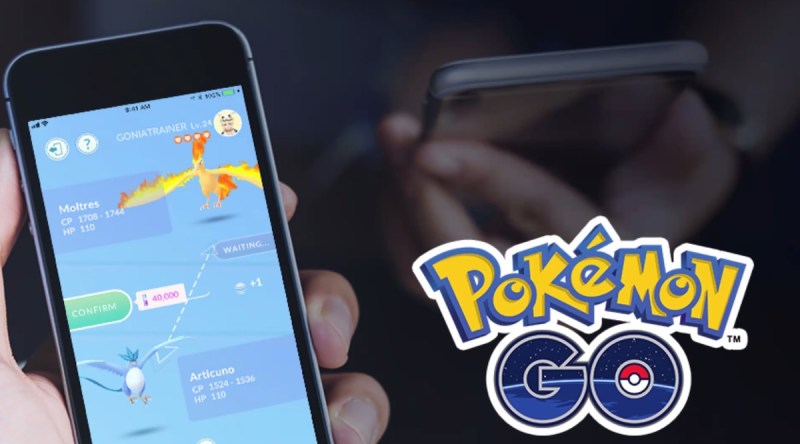 Above: It’s time to fight in Pokémon Go.

You’ll be able to battle with most Pokémon in Trainer Battles except for Ditto and Shedinja at launch.

When Trainers compete against Team Leaders they can earn progress toward the formerly retired Ace Trainer badge. Trainers can also earn badges for achieving a certain amount of victories in the three different Battle Leagues. 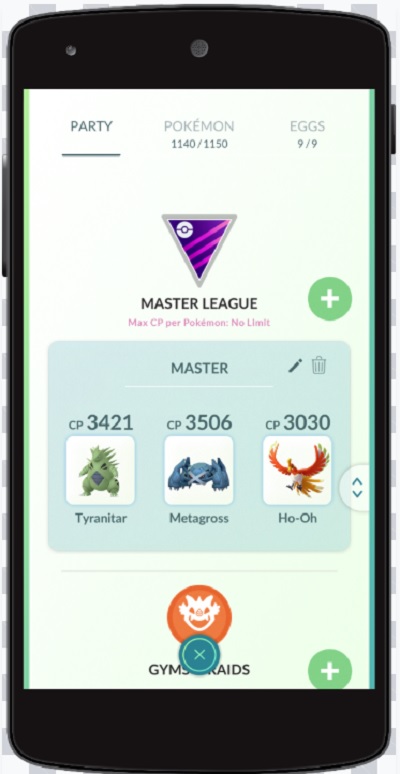 Above: Pokémon Go’s Master League has no limits on CP levels for battles.

With the recent introduction of the Friends feature, Trainers now have a good idea of how to meet with and engage with other Trainers. Trainer Battles give Trainers an all new reason to strike up a conversation with others during a community day event or if they see another Trainer participating in a Gym or Raid Battle.

Similar to Friends and Trading, Trainers must be over the age of 13 to participate in Trainer Battles at launch, but they can still engage in the daily Solo Battles against Team Leaders. There won’t be any formal esports tournaments at the outset.

That’s all we’ve got for now, but check out the video embedded in the story.