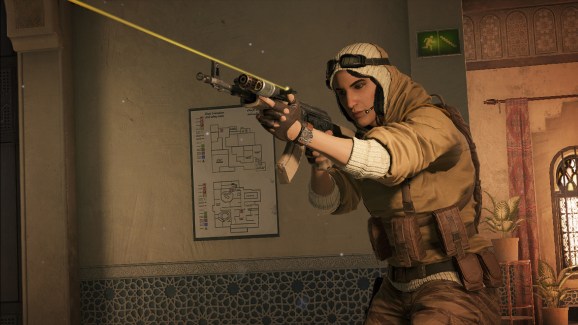 Fans of Tom Clancy’s Rainbow Six: Siege can begin playing as the new operators Nomad and Kaid today. Operation Wind Bastion is live now on PC, PlayStation 4, and Xbox One for players who own Siege’s Year 3 pass. If you don’t have the pass, you can unlock it using in-game currency or premium credits December 11.

Nomad and Kaid add one new operator to the attacker and defenders categories, respectively. These Moroccan heroes continue Ubisoft trend of introducing new ways to counter existing and popular strategies. They are also a big part of the ongoing live-services business model that encourages players to keep coming back to check out new content and to spend additional money on the game.

Here’s how the new characters break down:

She is an attacker that can knock players out of action even if they are taking cover behind walls or shields. Her Airjab is a projectile gadget that launches a grenade that creates a huge burst of wind. This won’t kill opponents, but it should knock them to the ground and prevent them from firing their weapon. This is trouble for shield defenders, who will drop their normally impenetrable guard when they climb back onto their feet.

He is a defender that can fend off aggressive breaches from attackers. His Rtila electroclaw is device you can throw that sticks to surfaces and electrifies anything that is metal. That includes reinforced hatches on the ceiling and deployable shields.

Fortress is the new map included with Wind Bastion for all players. It is free and set in Morocco, which is where both new operators hail from. Fortress is specifically the home of Kaid, so you will see pictures of him around the facility that doubles as a military training outpost.

While Fortress may only have two floors, Ubisoft has still given it plenty of verticality. That’s especially true for attackers who can exclusively access roof towers to drop down onto the second floor.

The map also gives defenders plenty of opportunities to funnel attackers into kill boxes like the bathroom. And attackers can try to avoid those ambushes by using some of flanking rooms to get long lines of sight on objective locations.

Fortress is also live now and joins the regular rotation of maps in Siege.