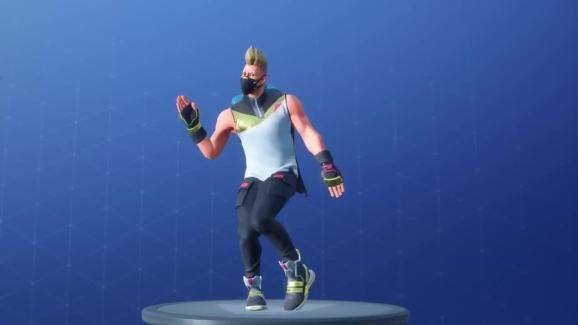 I wonder why Fortnite doesn't have a Garth Brooks emote ... OK. Actually, no I don't.

Hip hop artist 2 Milly has filed a lawsuit against Fortnite developer Epic Games. The rapper claims that the studio infringed on his copyright by reproducing his famous Milly Rock dance as an emote in the battle royale shooter. And while law firm Pierce Bainbridge is handling the complaint in the Central District Court of California, 2 Milly also wants to use the court of public opinion to try a U.S. corporation for profiting off of the creation of an African-American.

“I was never compensated by Epic Games for [its] use of the ‘Milly Rock,'” 2 Milly said in statement. “They never even asked for my permission. I am thrilled to have David Hecht and his team at Pierce Bainbridge representing me to help right this wrong.”

In his music video for Milly Rock, the rapper swipes his arms and kicks his legs. It looks like if Elaine Benes from Seinfeld was aware her dance was silly and she also had rhythm. Over the summer, Epic kicked off Season 5 of Fortnite that included the “Swipe It” dance that is an exact re-creation of the Milly Rock.

I’ve reached out to Epic for a comment, and the studio declined the opportunity to make a statement.

The rapper registered the dance for copyright protection in early December. That’s after the dance appeared in Fortnite, but this does not mean 2 Milly would not still get retroactive protections.

So is Epic violating 2 Milly’s copyright? Well, the United States began enabling artists to copyright their choreography in 1976, as explained by Denver’s excellent alt-weekly magazine Westword. But that does not protect a dance move. This is similar to music. You can copyright a song, but you cannot copyright a musical note.

To make the argument that Epic is in violation of 2 Milly’s copyright, the Pierce Bainbridge team will have to prove that Fortnite is not “fair use,” the dance is indistinguishable, and the dance is substantial enough to qualify as choreography. And the dance definitely looks exactly like the Milly Rock, so this will likely come down to that choreography question.

But 2 Milly isn’t alone in criticizing Fortnite and Epic Games. The shooter is one of the most profitable entertainment properties in the world right now, and many people believe that it is exploiting the work of African-American artists to acquire cultural cachet.

While 2 Milly is suing, Scrubs actor Donald Faison let fans know that he’s not wild about the game either. Fortnite’s “Dance Moves” emote exactly re-creates a memorable dance that Faison performed in an episode of Scrubs. You can sync up the Fortnite emote and Faison and see that Epic must’ve copied it frame-by-frame.

“If you want to see it, you can play Fortnite,” Faison told fans at the Vulture Festival in November. “Because they jacked that shit.”

Faison confirmed at the time that Epic did not pay him for the use of the dance.

The criticism around this issue has grown louder since Chance the Rapper first brought it to many people’s attention in July.

Fortnite should put the actual rap songs behind the dances that make so much money as Emotes. Black creatives created and popularized these dances but never monetized them. Imagine the money people are spending on these Emotes being shared with the artists that made them

In his post to Twitter, Chance touches on the concept of “we make it; they take it.” It’s the idea that black people create the culture, and then (typically) white people show up to exploit its as an economic resource. And while Epic’s developers were likely just trying to do something fun for fans, it now has one of the most profitable games in the world. And to the people who are creating the culture that Fortnite is standing on, it just looks like the latest in a long line of exploitative products.