GamesBeat: I wonder about the length. How you could sustain the player’s interest through something that’s so long. It took me more than 50 hours. I was very happy with a game like The Last of Us, which took me about 25 hours or so. I felt there was a lot there, a lot of variety. I don’t know that I ever wished it was longer. With yours, and those 105 missions, I wondered if you had to take a sharp knife to the missions.

“We can’t squeeze this one in. We have to cut it.” But there are so many oddball things in it, like the alligator quest or the drunkenness mission. There’s this whole epilogue that you don’t expect. From your point of view around the storytelling, how did you feel about making something that was so much longer than other big narrative games?

Nelson: Well, we didn’t compare ourselves to other narrative games. I don’t even know how much we compared ourselves to ourselves. We certainly went through an editing process in this game and cut a lot of missions, mostly close to the end. Ultimately we made the decisions we made after discussing them closely.

We pulled a lot of the missions out of the main flow and made them optional. We’re always doing that, pulling missions on and off the main flow. In this game we did that more aggressively than we ever have, but it had nothing to do with the production value of those missions. We did it based purely on Arthur as a character and his potential for growth.

We felt like any mission that Arthur would do as a character based on his job and his role in the gang, which is to support Dutch and support his family, that’s what you need to do, because that’s Arthur’s job and what sets him up as a character. Any mission that afforded the player some kind of opportunity for growth or reflection, we pulled off and made optional, so that if we had any sort of revelation that made him feel different or changed, the player didn’t feel like, “Well, I didn’t want my Arthur to do that.” We tried to do that as much as possible.

We also have a lot of people in the game. You need to spend time with all of them to get to know them. You might not engage with any of the stuff that’s going on in the camp as you walk through, so we needed to make sure that there was at least one or two things with every character so that you got to know them. The Lenny one was important to us. It makes what happens with Lenny mean something to you. If you didn’t spend any time with him — if we didn’t make you spend any time with him — you’d feel like, “Eh, I don’t care about that guy.”

That’s an example of why we made that decision. But we talked about all of these things all the way through. Anything we left in there, we left in for reasons.

GamesBeat: The one where my closet game designer comes out and I get all fiery was the Romeo and Juliet mission. That’s one I thought shouldn’t have been optional, where you resolve the feuding families —

GamesBeat: I thought, “Wait, how can I leave this area without finishing that?”

Nelson: That’s a good example. It’s optional, but it wasn’t optional for a while. The question we had was: Why would Arthur help them? Your Arthur might want to help them and see that they get away OK, but my Arthur might not care. It doesn’t serve his purpose. My Arthur’s purpose is to get away with the money and take care of himself.

GamesBeat: You must have had the wolf dreams, then. I had the deer dreams.

Nelson: [Laughs] Yeah. Those are the kinds of conversations we have, and we want people to be having those conversations. We fight over all of these things. “This one has to be mandatory. This one has to be optional.” But it was really fun. Some of my favorite experiences in the game are options within options within options. Some of the best sequences and things you can get are very deep within — if you don’t help this person, and then go and help this person, then a different person will appear much later in the game and you’ll get this heart-wrenching revelation from Arthur. But it only happens if you do this stuff.

I think that stuff would be less meaningful if people didn’t care about helping the people who got them there. I’m not saying that we got it exactly right, but that’s definitely the sort of stuff we’re thinking about, and that we want people to think about when they’re playing the game.

Why was it a prequel?

GamesBeat: Do you ever regretted doing this as a prequel as opposed to a sequel. Would you have more freedom, in a sequel, with how the story could turn out?

Nelson: I don’t think we ever regretted it. I personally remember begging Dan [Houser], let it be a prequel where we play in the gang from the last game. [Laughs] That’s just my personal opinion. But I wanted it to be in that gang doing that stuff. I suppose there are some limitations because you know how certain stories are going to end, things like that. But it never really bothered us while we were making it.

GamesBeat: As a player, it gave me this sense of impending doom.

Nelson: Yeah, I know. That’s a strange case. Certainly there were a lot of ideas like that in this game that we thought were worth exploring, that we thought were interesting. Again, this game wasn’t — it was different from a lot of games, I think, and a lot of games we’ve made. Instead of starting out as this unassuming, weak person who doesn’t know many people, who has to go out in the world and build up their strength, you start as a very strong person who’s very self-assured and confident in his place in the world. And then that falls apart.

Games are aspirational a lot of the time. You’re chasing something. To make a game where the carrot isn’t always obvious — we started out with this perilous situation where we were trying to teach you how to do a lot of things, but then we pop you out into the open world, and we very consciously structured the early chapters to be quite open. You don’t have a gun-to-your-head objective. The objective is to lay low and rebuild your savings, to make money.

We wanted to take all of those things that we felt were what people felt from the last Red Dead — living in the wilderness — and then, how do you do that? Surviving on your wits and making money. The gang needs money. We tried to encourage you, even though some players still rush through it, to go out and engage with the world and make some money. Bring it back to the gang if you want, like you’ve been asked to, or you can enjoy life as it is now, because life doesn’t last forever. You don’t know that necessarily when you play in those early chapters, but we really tried to make it feel like this is open, and it’s about the gang having fun and enjoying life as it happens. Because you never know.

Those were really fun ideas to explore. We didn’t know how they would resonate with people. People might just say, “What’s my goal in this thing?” But we definitely had fun with that. 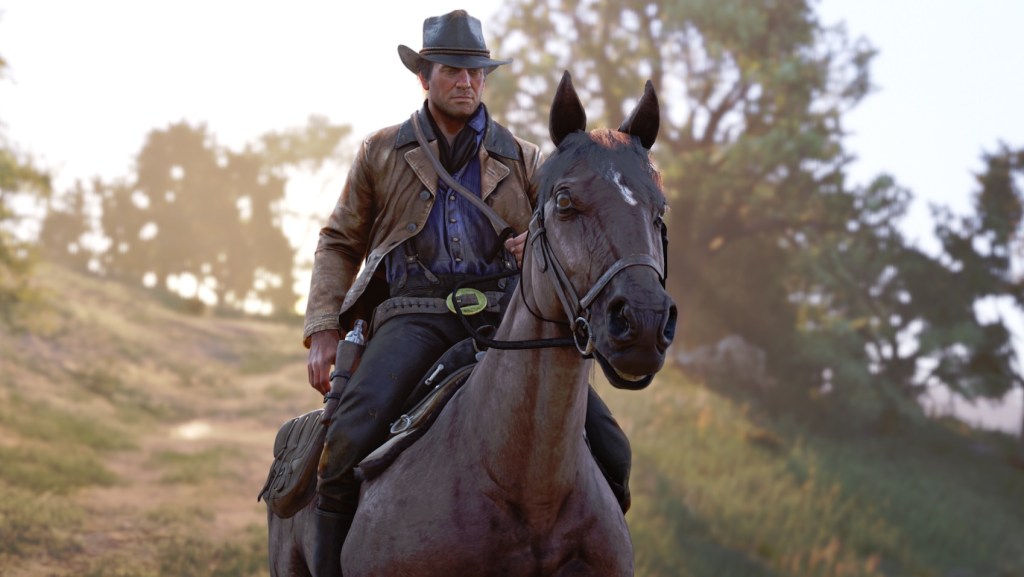 Above: Arthur Morgan is the main character of Red Dead Redemption 2.

GamesBeat: How do you feel about some of the reactions from players? What’s caught your attention on how people are reacting to it and forming their own opinions?

Nelson: First of all, we’re relieved that people generally like it. [Laughs]

It’s interesting. We did make decisions that we really had to commit to. We couldn’t do a lot of the things we did halfway, like the pacing. Some of the real living stuff — we knew all of those things had potential issues when we decided to pursue them.

It’s interesting to see how people are talking about the pace of it. I like that we’re in a kind of dialogue with people. We’re seeing the exact same conversations we had internally, when we would fight it out over different things being too long. Was the beginning too long? But if we completely removed all of that stuff, I feel like the game wouldn’t mean as much. Things have to pause sometimes.