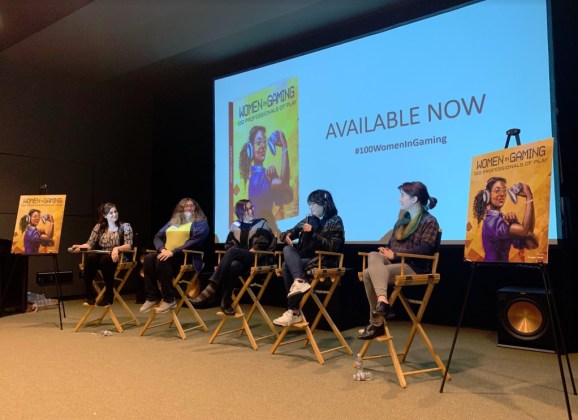 The women of the video games industry are finally getting their herstory book. Women in Gaming: 100 Professionals of Play went on sale yesterday.

Meagan Marie, the book’s author, marked the occasion by organizing a evening of panels of female gaming pioneers at the headquarters of Crystal Dynamics in Redwood City, California.

The book illustrates how women have played — and will continue to play — important roles in the video game industry, which is now a $134.9 billion business.

Marie, senior community and social media manager at Crystal Dynamics, recruited women from decades of game creation for both the book and the panel sessions. Marie pointed to a young woman in the audience and said, “I wrote this book for women like you, to inspire you and, no matter who you are, to motivate you to go into the industry.” 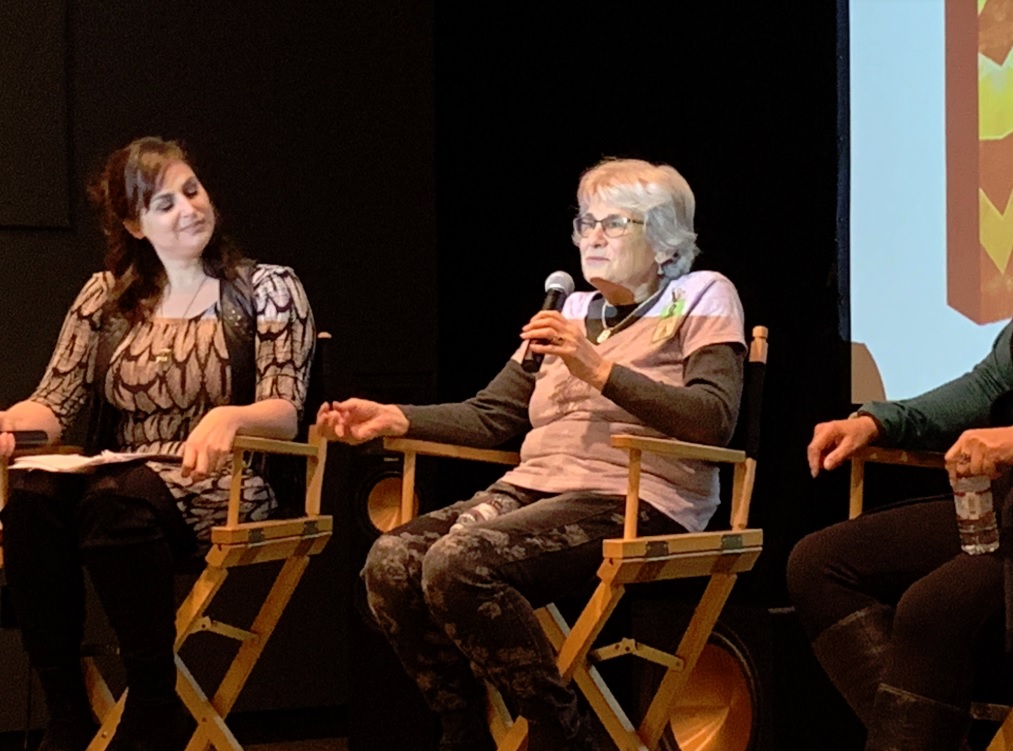 Above: Meagan Marie of Crystal Dynamics (left) and Carol Kantor, formerly of Atari.

Asked how she felt about being the very first profile in the book, Carol Kantor, who worked at Atari in its early days in the 1970s, replied, “Old.”

Kantor was recognized for starting formal research in the game business, taking methods from companies like Clorox and figuring out what people liked in the arcades.

Getting honored “made me feel like an antique,” Kantor said. “We did what we thought was right to make the games better. Other people have done even more since then.”

Kantor said she loved Atari and that she has maintained her friendships, even long after leaving the company. She still runs her own promotional products business, Business Builders.

Evelyn Seto, meanwhile, talked about the manual process of creating the designs on Atari’s arcade cabinets in the 1970s. She joined the art department with her former boss and had a great time being creative with the branding, illustrating, and other production art work.

“All the panels you see on the arcade machines are hand-cut stencils,” Seto said. “We romanticized the concepts of the game.” 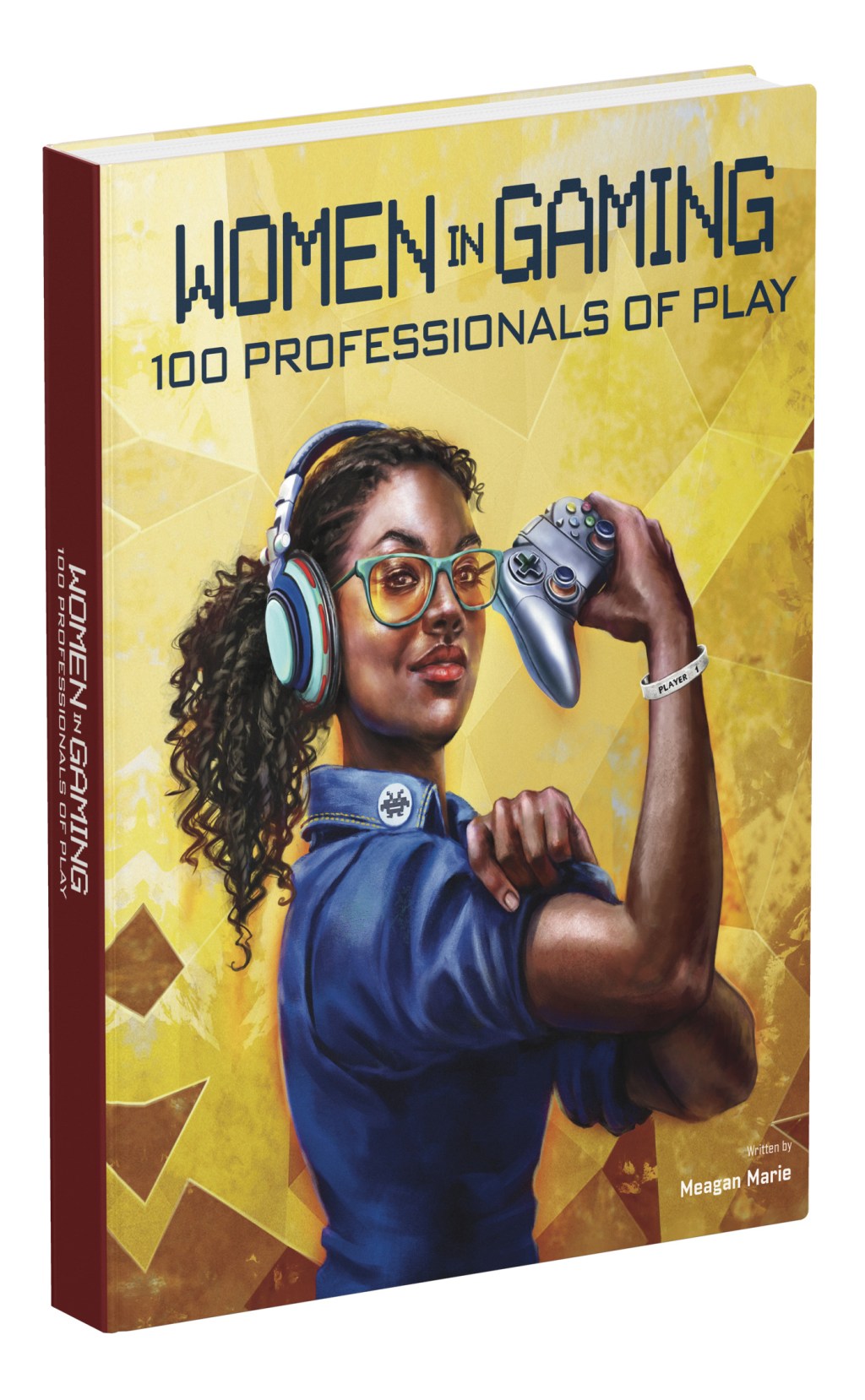 Above: Women in Gaming: 100 Professionals of Play is now available as a book.

She went on to work with Atari cofounder Nolan Bushnell on Chuck E. Cheese. She noted that Chuck’s voice was kind of scary at first as an “East Coast gangster.”

Brenda Laurel, founder of Purple Moon, was a pioneer of games for girls with the Rockett series in the 1990s. She talked about how she worked for David Liddell, the head of Microsoft cofounder Paul Allen’s think tank, Interval Research. For four years, she investigated why girls ages 8 to 12 dropped out of science, math, and programming while boys thrived. Video games were a big part of what kept boys motivated, but the games in those days weren’t tailored for girls.

“The 8 to 12-year-old girls had issues,” Laurel said. “Our goal at Purple Moon was to give girls emotional rehearsal space to make choices.

Her team interviewed more than 1,000 girls and 400 boys in eight cities.

“We began to discover what some of the barriers were for girls,” she said. “There weren’t any games for girls. There’s some inventiveness that has to come from understanding your audience.”

But the market was tough. While Rockett’s first game beat out Madden’s sales in the year it came out, it had to compete for shelf space with Mattel’s Barbie Fashion Designer. Purple Moon shut down in 1999.

“We made a positive difference in people’s lives,” Laurel said. “I’m happy we did it. Nobody made very much money.”

Jennell Jaquays became a fan of Dungeons & Dragons in 1974 (at the dawn of the tabletop role-playing game), and she created the second-ever published fan-created D&D adventure. She founded a D&D fan magazine, The Dungeoneer, that she sent out to people in hopes of getting subscribers.

She said she “was in between money” and interviewed with Eric Bromley at Colecovision in Michigan. She got the job and worked on an electronic game that combined voice chips and bar codes.

She made her way to Interplay, where she got to work on a game based on The Lord of the Rings. She added details that expanded the Tolkien universe, and went on in 1997 to work at id Software. That studio made her go through a week’s worth of interviews, but they offered her a job as a level designer for Quake, because they found she could make the leap from designing tabletop games to 3D computer levels.

Jaquays went on to cofound the Southern Methodist University Guildhall game development school in the early 2000s, where her son eventually attended. She got together with four women to start Oldsküül, which has specialized in porting classic games to modern game consoles. 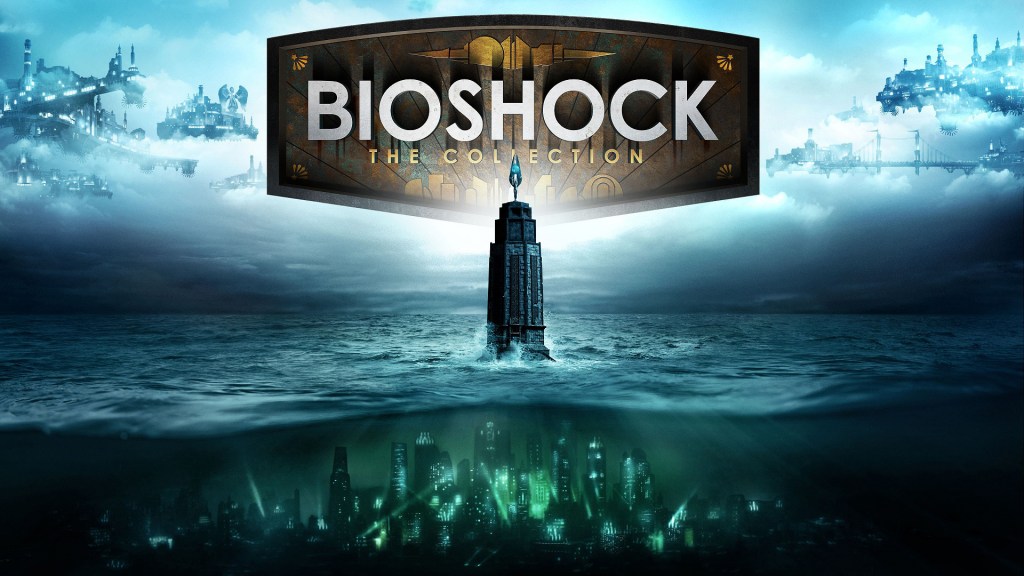 Above: Alyssa Finley of the BioShock series is in “Women in Gaming.”

Rebecca Heineman worked on games like The Bard’s Tale 3, Descent, and Wasteland in the early days of gaming at Interplay. She left to do freelance work and moved around to different companies.

She noted that the four women (including Jaquays) who started Oldsküül had more than 125 years of experience in the game industry, but no one would hire them. That was a symptom of age discrimination in gaming, and Heineman said that when she interviewed for jobs, they sometimes told her she was qualified but was “not a good fit” with the team.

“So we decided to form our own company,” Heineman said.

Alyssa Finley, meanwhile, started in customer support. She worked her way up and became project lead on Irrational’s BioShock, one of the finest video games ever made. She went on to be executive producer on BioShock 2 at 2K Marin. She also worked at Stormfront Studios and at Electronic Arts, where she worked on a Lord of the Rings game.

Regarding BioShock 2, she said it was exciting to work on such a big property. But it was tough because the expectations for the second game were so high after the first one was a big hit.

“It was huge pressure, but I learned a tremendous amount doing it,” she said. “It came down to setting a culture and having a clear vision.”

Finley most recently worked at Telltale Games, where she was working on the sequel to The Wolf Among Us. Telltale shut down, and Finley hopes that someone will eventually pick up the game and bring it to the finish line. 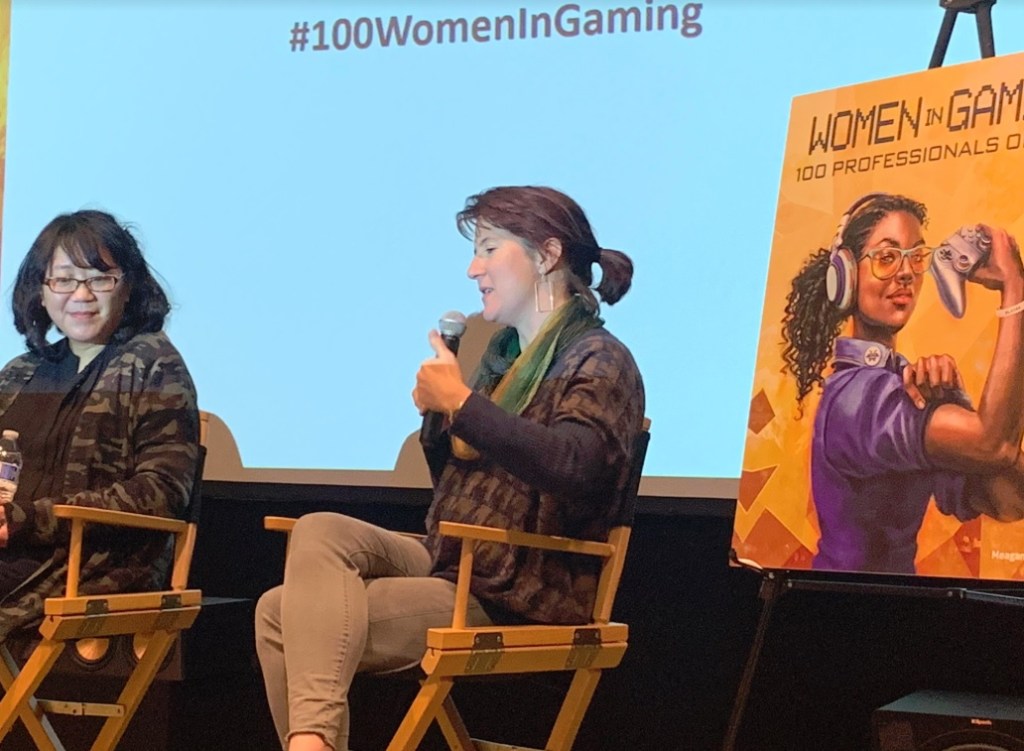 Above: Francesca Reyes (left) of 2K and Kellee Santiago of Google.

Francesca Reyes found a job through the classifieds in customer support at Sony. She started working on a walkthrough for a game called Beyond the Beyond, and in 1999 she switched over to become a games journalist at the Official Dreamcast Magazine.

In 2005, she became editor-in-chief at the Official Xbox Magazine, or OXM. In that job, she was the first female editor-in-chief in the Imagine (later Future) publishing chain, and she was often quoted in the press about her opinions on games. Among the perks: She and another journalist were the first ones to play Halo 3 in 2017.

She stayed at OXM for about a decade and three years ago left to join 2K Games, where she is now a user research manager.

Kellee Santiago got her start in games at the University of Southern California’s School of Cinematic Arts, where she took a class on game design from professor Tracy Fullerton.

“I had played video games, but I never thought about making them,” she said. “I went to the Game Developers Conference and said, ‘This is what I’ve been looking for this whole time.'”

She met Jenova Chen and others who became part of Thatgamecompany. Chen worked on a title dubbed Cloud, which helped the young team secure a deal with Sony’s PlayStation division. Their company, Thatgamecompany, made the games Flow, Flower, and Journey. The latter won many Game of the Year Awards when it came out in 2012.

“That was a culmination of that time of my life,” she said. 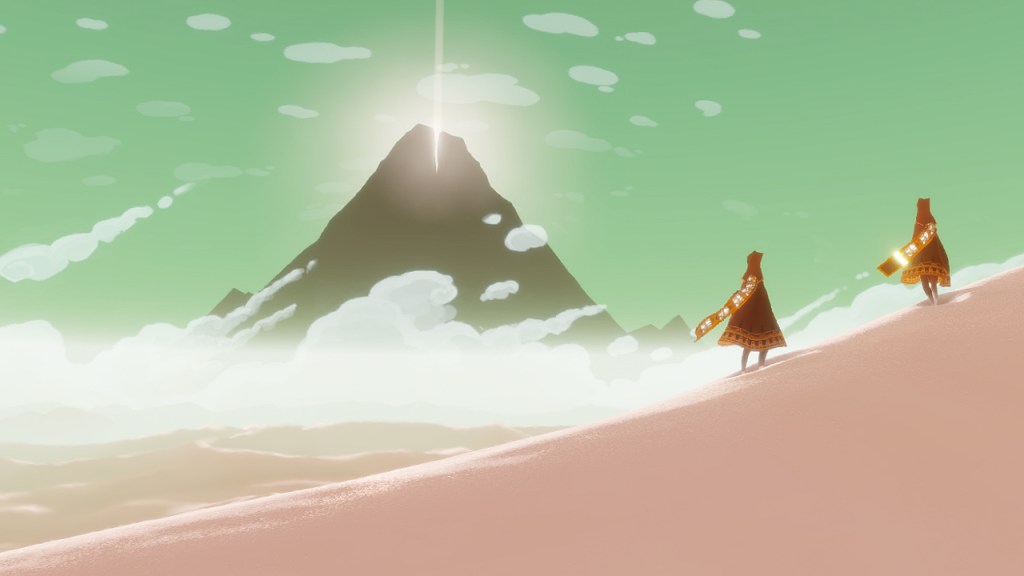 Above: Journey is one of gaming’s indie success stories — and remarkable pieces of art.

Santiago became famous for giving a Tedx talk on how video games are a form of art, and even more famous when film critic Roger Ebert disputed her claims, even though he had never played games. That discussion led to passionate defenses by gamers and an eventual recognition of the cultural influence of video games. Santiago said her team sent Ebert a PlayStation 3 with Thatgamecompany’s Flower on it, but she never heard whether he played it.

After finishing three games that Sony contracted for at Thatgamecompany, the team found it had the freedom to work on anything. But at that point, some of the team members realized they wanted to do different things, and they split up after Journey shipped.

Santiago went on to work on the now-defunct Ouya indie games console, and she now works at Google, where she helps find developers working on virtual reality, augmented reality, and extended reality projects. 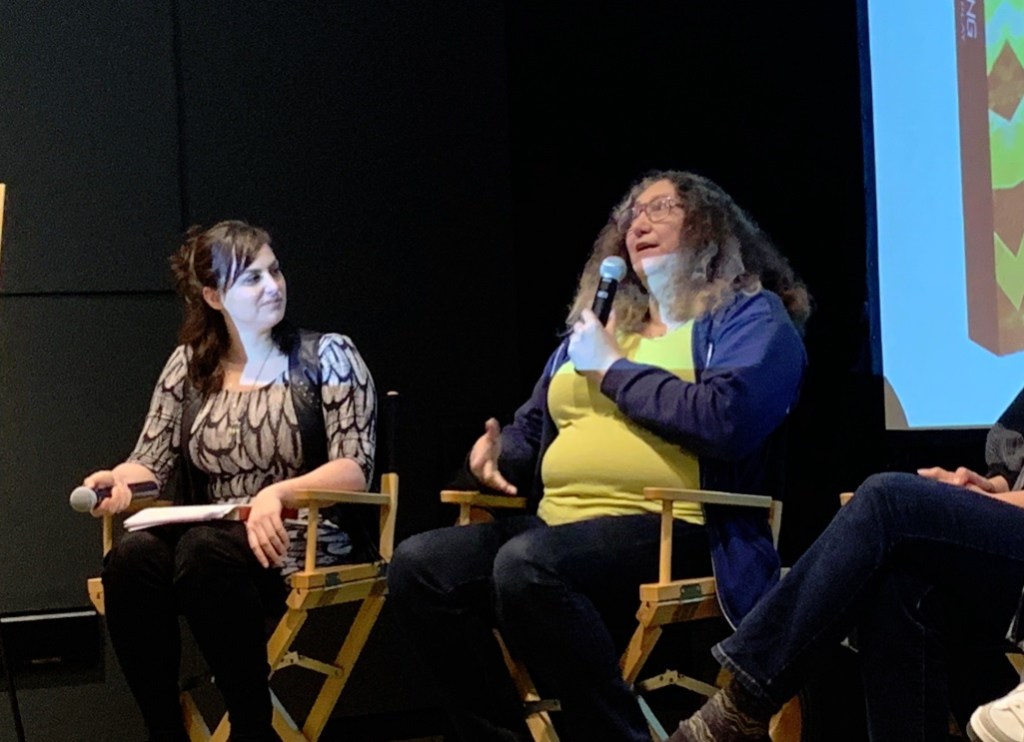 Above: Meagan Marie (left) of Crystal Dynamics and Rebecca Heineman of Oldsküül.

Others in attendance included Kirsten Duvall, a 25-year veteran in the business of games at companies such as Microsoft; Debbi Colgin, customer support director for games such as Virtual Magic Kingdom, Habbo Hotel, Fiesta Online, and Second Life; and Morrigan Johnen, community and social media manager at Crystal Dynamics.

These women were among the 100 prominent and influential women who are profiled in the book. The women range from high-level executives to programmers to professional gamers. Among them are Megan Gaiser, former CEO and president of Nancy Drew game maker Her Interactive (and a longtime adviser for our GamesBeat Summit events).

Others covered in the book include:

Jen MacLean, executive director of the International Game Developers Association and IGDA Foundation, wrote the forward. (Sneak peek: MacLean will be a speaker at our next GamesBeat Summit.)