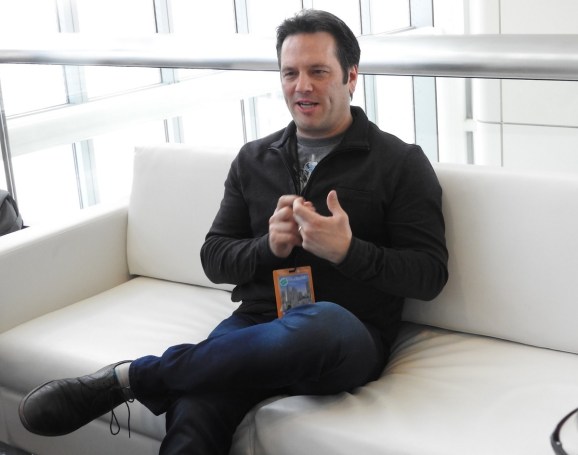 You may have noticed that Xbox boss Phil Spencer is throwing around Microsoft’s hefty wallet. The company has made a number of acquisitions over the last year to shore up its first-party game development. And Spencer explained that he earned the right to do that because Microsoft’s executive team is more interested in gaming than ever.

Spencer was on stage today for a discussion at the Barclays Global Technology, Media, and Telecommunications Conference in San Francisco. And he explained that Microsoft’s gaming division generated more than $10 billion in revenue for the first time during its 2018 fiscal year. Gaming ended that 12-month period as 9.4 percent of Microsoft’s total revenue. And surpassing that threshold turned some heads inside Microsoft.

“Amy Hood, our CFO, she likes to tell me I’ve made ‘the spreadsheet,'” Spencer said during a fireside chat (via CNBC). “So she’s going to pay attention.”

Of course, Microsoft has had a gaming division since the Xbox debuted in 2001. But it has operated in something of its own silo until Spencer joined Microsoft chief executive officer Satya Nadella’s executive team in 2017. Quickly after getting that promotion, Spencer began flexing his muscles as the leader of a core pillar of Microsoft’s business.

“We’ve acquired and started seven new first-party studios in the last year,” said Spencer. “We obviously don’t do that without tremendous support from Satya and Amy.”

And the seven new and acquired studios are different from the big-time bets that Microsoft made before its current strategy. In 2014, the company bought Minecraft developer Mojang for $2.5 billion. And Microsoft would only make deals on that scale because that’s all the executive team cared about. But now that Spencer is free to spend some money on his own, he’s making smaller, more strategic deals.

“We understand content is a critical component of what we’re trying to build,” said Spencer. “And the support from the company has been tremendous.”

A strategy for the future

During his time onstage, Spencer explained that he has sold Nadella and Hood on gaming. The company has morphed from an operating-system developer to a services provider, and Spencer talked about how gaming could act as a backbone for the growth of services like the cloud.

Spencer spoke to one of the more obvious opportunities, which is marrying Xbox’s successful Netflix-like Game Pass subscription with its upcoming Project xCloud streaming platform.

Spencer once again reiterated that the future of Xbox platforms looks more like Game Pass than a console. While a new Xbox is coming, Microsoft wants to find a blue ocean of new gaming fans.

“For us, it’s all about how we reach 2 billion gamers,” said Spencer. “If you build the market around a couple hundred million people who are going to own a game console or a high-end gaming PC, then your business-model diversity can actually narrow because your customers are narrow. But when you think about reaching a customer with this content where their only compute device could be an Android phone, you think about, well, what are all the ways that person pays for content if they do at all today?”

And this is Spencer looking beyond the current fight in game distribution. Fortnite developer Epic Games announced its own PC-gaming store this week. It joins massively popular communications platform Discord in launching a market this year. But Microsoft is thinking about all of the people who don’t buy games at all.

Spencer wants to give them a comparable experience and an instant library for $10 per month.

How Sony’s and Nintendo’s strategies compare

And the thing about Microsoft is that it is one of a few companies with the cloud-infrastructure and game-development know-how to make a cloud-based Game Pass system work.

Sony also has the know-how, and it has a cloud-gaming business in PlayStation Now. But Sony does not have cloud servers all over the world. It also doesn’t seem as keen on making its current games available on platforms outside of the PlayStation 4.

And Nintendo’s focus is on selling Switch units, which is going for a slightly different blue ocean by making games available to anyone and anywhere.

That leaves Microsoft an opportunity to lead on cloud-based subscription gaming, and it is going to seize that chance.