We now know what Obsidian Entertainment’s first project is as a Microsoft-owned studio: It’s The Outer Wilds, a sci-fi role-playing game for the PC, PlayStation 4, and Xbox One coming out in 2019. The studio made the announcement at tonight’s The Game Awards show in Los Angeles.

The Outer Worlds will be a single-player, first-person RPG. It’s the first sci-fi game for Obsidian Entertainment since 2004’s Star Wars: Knights of the Old Republic II — The Sith Lords, which garnered the studio critical praise despite a raft of bugs and cut material. 2010’s Fallout: New Vegas was the last time Obsidian made a game with a first-person viewpoint (though it’s better in the third-person viewpoint). It’s coming from the original creators of Fallout, and the Private Division is working on this, too. It worked on Kerbal Space Program DLC.

In the trailer, we saw a man running. He’s talking to you through glass. It late pans out to show a frontier town at the edge of the galaxy — and crass commercialism. You’re settling this colony. The player character appears in a suit of space armor and with a space firearms, and it showed off a great deal of humor as well — with both the lines, art, and music. We then saw a cascade of clips of ships, monsters, and areas. 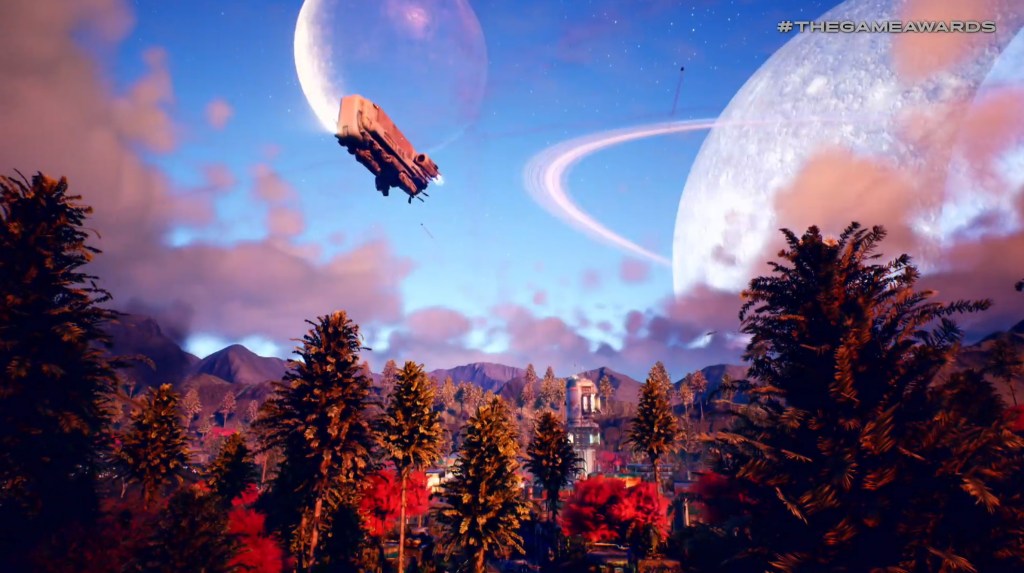 How Obsidian got here

Microsoft acquired Obsidian Entertainment in November. 2018 has been a good year for Obsidian. Pillars of Eternity II: Deadfire debuted in May to strong reviews, and I not only thought it was better than its predecessor, but it’s also my favorite game of the year so far.

Obsidian opened in 2003 shortly after Black Isle closed. Its first game was Star Wars: Knights of the Old Republic II. But its reputation has only increased in later years, as has the rep for its second release, 2006’s Neverwinter Nights 2.

2010 would bring the game that helped define Obsidian — Fallout: New Vegas. It’s considered the best of the post-Fallout 3 games, and some view it as the studio’s best release.