Before Super Smash Bros. Ultimate’s reveal, I figured Nintendo would just port the Wii U version of Super Smash Bros. to the Switch. We’d maybe get a couple of new characters, but it would mostly be the same game. That’s what Nintendo did with Mario Kart 8 Deluxe, and it’s one of the system’s top sellers.

But Super Smash Bros. Ultimate went far beyond my early expectations. It’s doesn’t just add some new characters and levels, but Ultimate has one of the biggest rosters I’ve ever seen in a fighting game. And even if you don’t always want to compete with friends, it gives you plenty to do when you’re playing alone.

I love Super Smash Bros., and I’m always playing the series with my family and friends. And I can already tell that we’ll all be spending hundreds of hours with this fifth generation installment in the franchise throughout the next several years. But that time will be spent with my friends in close proximity, as the online offerings disappoint.

Ultimate includes every character that was ever part of Smash Bros. So along with mainstays like Mario and Pikachu, we see the return of fighters that have only made an appearance in a single Smash Bros. entry, like Metal Gear Solid’s Snake and Young Link from The Legend of Zelda: Ocarina of Time. And then we also have several new characters. This includes fighters I had been hoping to see in Smash Bros. for years, such as Castlevania’s Simon Belmont and Metroid’s Ridley. 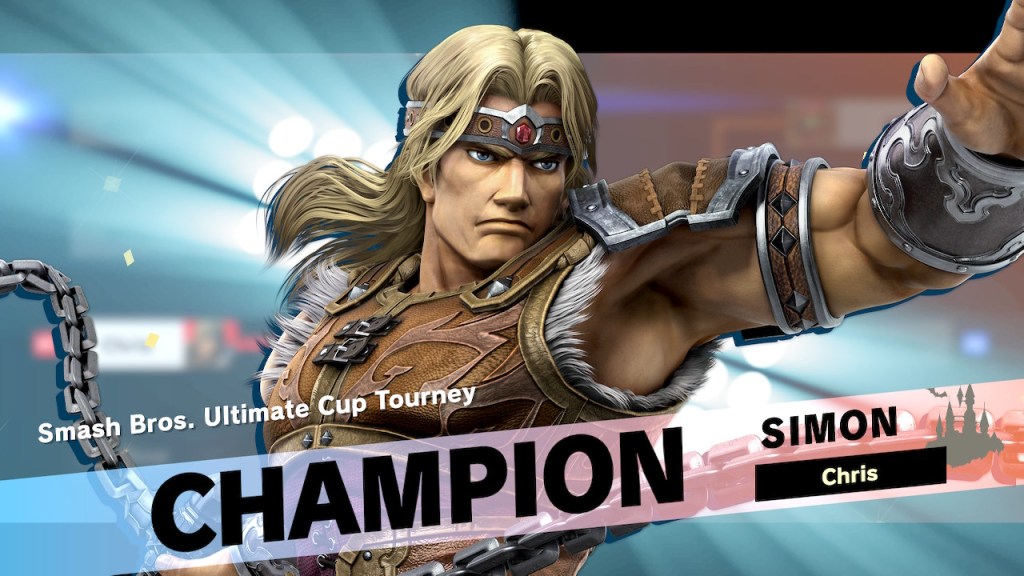 Above: Simon Belmont enters the ring.

Trying all of the new characters is a blast, but I also had fun going through returning fighters and discovering the minor and major changes. Many of them have new looks. Zelda’s appearance comes from the 3DS game A Link Between Worlds rather than her Twilight Princess appearance. Others have costume options that represent their latest games, like Link’s blue attire from Breath of the Wild and Mario’s white wedding outfit from Super Mario Odyssey.

The changes aren’t just cosmetic for many characters. Along with small tweaks, like the strength and launching power of certain moves, many of them have had attacks and abilities reworked or changed. Luigi finally uses his Poltergust 3000 vacuum from the Luigi Mansion series as part of his throw attacks, and Ganondorf will use his sword for his Smash attacks.

Just trying every character for a couple of fights brought me hours of joy, and then I can pick out my favorites and focus on mastering them. The variety of the roster ensures you won’t be bored with Ultimate for a long time. 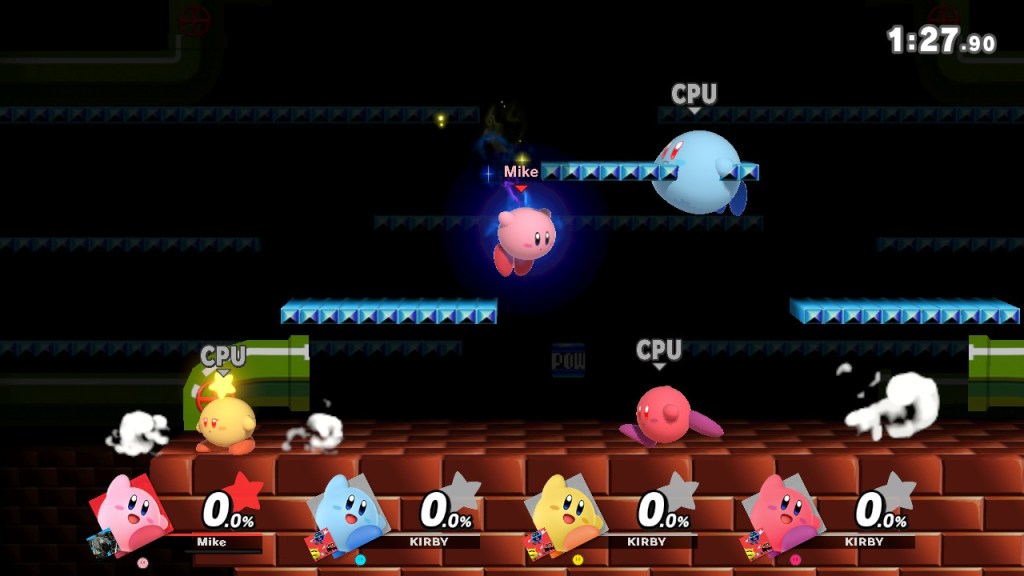 Above: The Battlefield version of a stage based on the Mario Bros. arcade game.

This variety extends to the stages. Although Ultimate doesn’t include every level in Smash Bros. history, it comes close. And for the first time, you can turn off stage hazards. This means I can enjoy the Mega Man level without having the Yellow Devil (a boss from Mega Man) show up and block half of the screen.

Just like in the Wii U and 3DS Smash games, you can choose to turn any level in a Final Destination form, which feature a single, flat platform for everyone to battle on. But Ultimate also adds selecting Battleground versions of every stage. This gives each level a layout identical to the Battleground level, which has one large platform below three smaller ones. This option makes it so that you can play levels that have settings and themes you like without having to deal with their original (and sometimes annoying) layouts.

Each level also has music you can select from its corresponding franchise. The selections include original classic Nintendo tunes and new arrangements. It’s an incredible collection of music, and fans of these game series will take a lot of delight just in exploring Ultimate’s soundtrack. 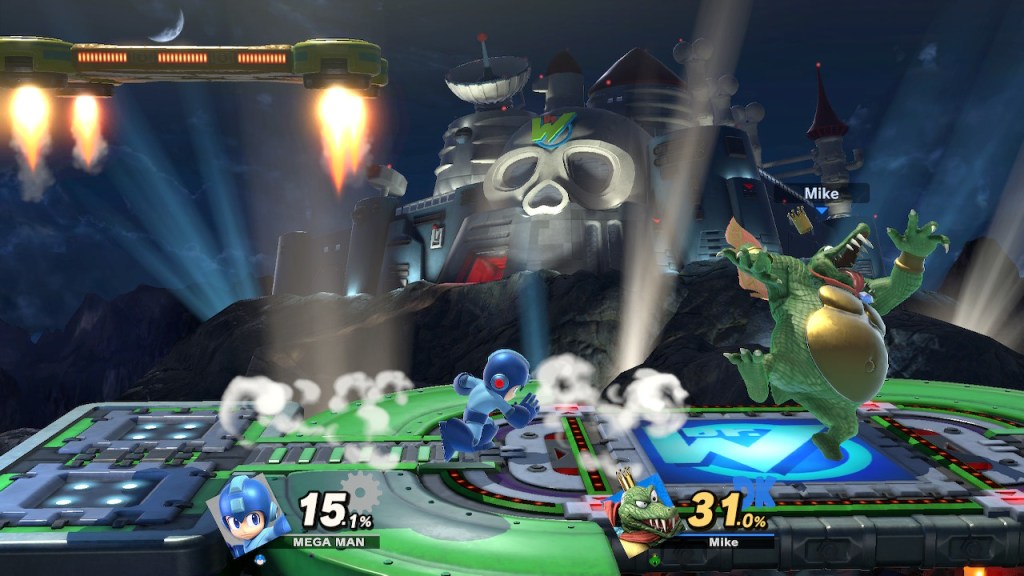 Ultimate is also a faster game than its Wii U counterpart. Most characters feel quicker and attacks generally hit harder. This makes for a faster-paced experience. No, it’s doesn’t quite match the crazy pace of Super Smash Bros. Melee for the GameCube, which remains a favorite with many Smash fans. But it’s as close as we’ve gotten since then.

Presentation and interface changes also bring big improvements. Some of these are more flashy than substantial. If you land an attack that’s likely to deliver the winning blow of the match, the camera will quickly zoom in on your character at the moment of impact. It’s a neat touch that helps make the end of a battle more exciting. Also, a new minimap will appear in the corner of the screen when a character is knocked out of camera’s view of the stage. This gives you a better idea of how close you are to being knocked out and killed.

Even specific characters have some new UI help. Fire Emblem’s battle mage Robin is a fun fighter in Smash Bros. for Wii U, but he was difficult to keep track of. His weapons and spell books only had so many uses before they were thrown away. You then had to wait for them to available again. On the Wii U, you never knew how many times you could use your sword or spell before you ran out, but now a meter above his character portrait helps you keep track of that information. 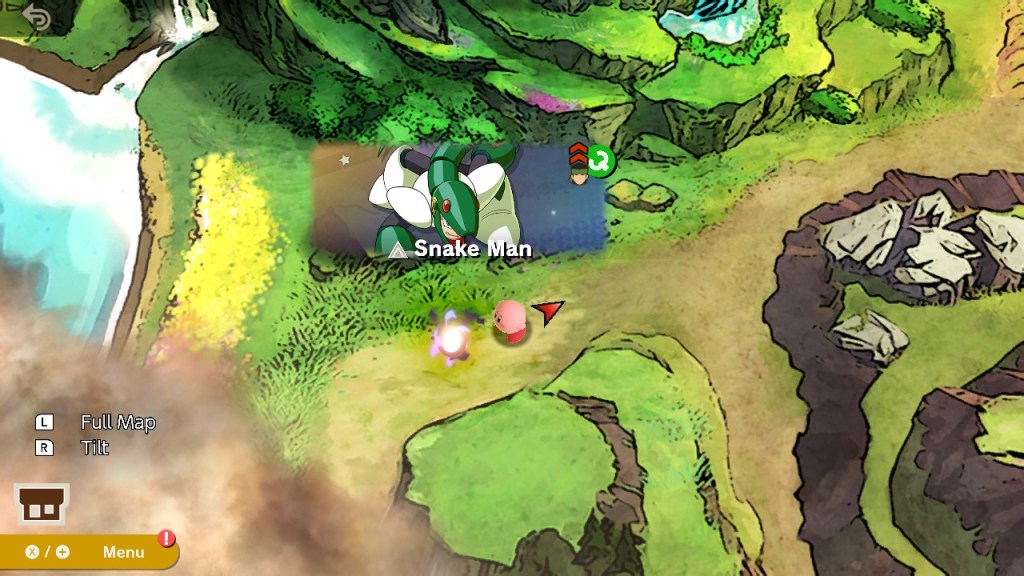 Above: A small part of the map in World of Light.

Smash Bros. on Wii U and 3DS both lacked any substantial single-player experiences. Say what you will about the overly floaty and slow gameplay of Super Smash Bros. Brawl for the Wii (and I won’t even bring up tripping), but its Subspace Emissary mode was a lot of fun. It offered us a story-driven Smash campaign that gave solo players something interesting to do aside from fighting against waves of computer-controlled opponents.

Ultimate brings a new major solo mode, World of Light. It’s not as story-driven as Subspace Emissary, but it is much, much bigger. You explore a giant world map fighting hundreds of unique challenges.You might have to beat an opponent while the floor is on fire, or you have to win against a wave of enemies while the screen occasionally flips upside down.

Each time you win a fight, you unlock a Spirit. These represent characters from other Nintendo (and some third-party) games. You can equip these to give yourself stat boosts and bonus effects. One might make you immune to fire, which would be useful to that challenge where the floor’s engulfed in flames.

Getting the Spirits is fun for the sake of collecting them, and they add an RPG element to World of Light that gives you a sense of progression. The Spirits also tie in with the fights you need to beat to unlock them in clever ways. To unlock Snake Man from Mega Man 3, you have to beat Snake from Metal Gear Solid. Ha. Also, the battle spawns a bunch of the Bomchu item, which happens to work a lot like Snake Man’s signature attack from the Mega Man series.

I can’t stress enough how big this mode is. Unlike Subspace Emissary, it’s not something you’ll blaze through in a couple of days. World of Light offers a ton of content and some good challenges for Smash Bros. fans looking for an engaging experience that they can enjoy by themselves. 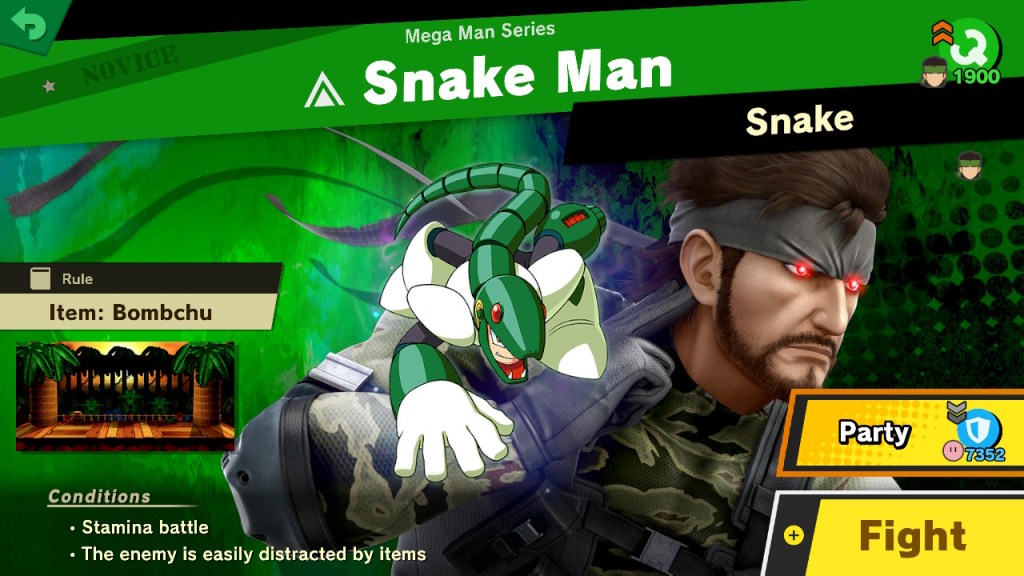 Above: Preparing for the Snake Man battle.

Playing Smash Bros. alone or with friends in the same room is fantastic. Playing online is disappointing. Lag is a constant problem. Some matches are better than others, but most bouts will feel sluggish. Some will even suffer short freezes. Some lag is expected, but Super Smash Bros. Ultimate performs worse than most other fighting games.

Even if the lag wasn’t a problem, the online features would still be problematic. When you’re looking for a match in Quickplay, you can create your “preferred rules.” For me, this means 1-on-1 matches with no items turned on. I tried to find a fight with these options on almost a dozen times, but I was always put into a four-player free-for-all match (sometimes with items, sometimes not). This was nothing like the kind of match I wanted.

You can at least create or join lobbies (called Battle Arenas) with specific rules, but this isn’t an ideal alternative. Six people could be in a room, but only two will be fighting. Once someone loses, someone else can jump in. Plus, you can’t your Global Smash Power (a skill rating that goes up when you win online matches in the main online mode) in these lobbies.

The whole system is a mess. It’s not a huge deal for me, as I never play much Smash Bros. online. But I’m lucky. I have a group of friends that are willing to come over and play the game with me. It sucks if you need to depend on online play to actually compete against other humans. 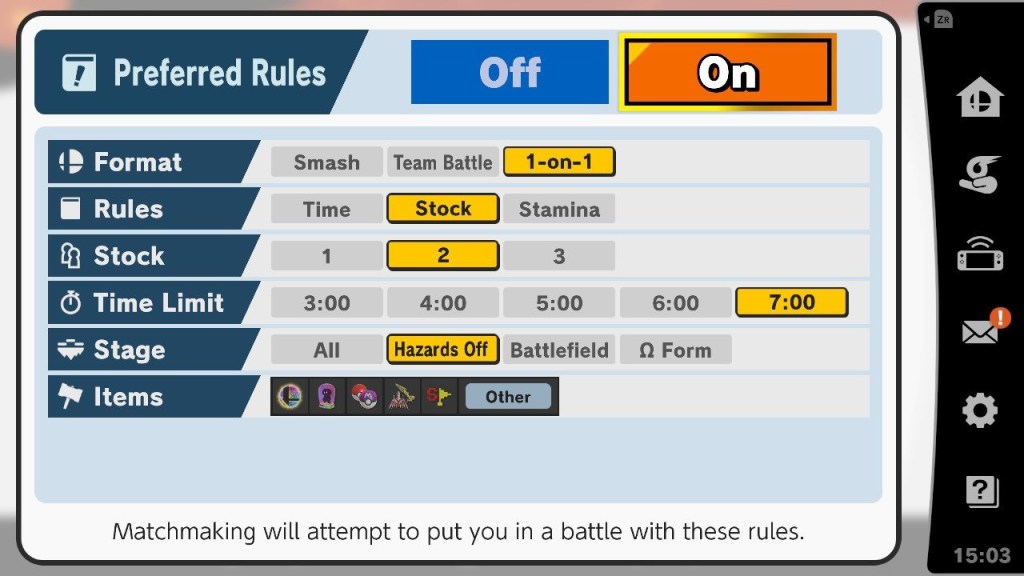 Above: It’s a nice dream.

Some characters seem notably stronger than other. King K. Rool (Donkey Kong’s crocodile nemesis) has strong melee and ranged attacks. His recovery can get him back on the stage from just about anywhere. He an also instant-kill most enemies that have more than 100 percent damage with a simple throw combo. He feels overpowered.

Now, Ultimate has 74 characters. Of course some are going to be stronger than others. But it seems a bit silly that some fighters have few downsides.

I love Super Smash Bros. for Wii U, and Ultimate is better in almost way. The roster is bigger, the single-player offerings are much stronger, and it’s prettier. And the game felt comfortable both on the TV (with a GameCube or Pro Controller) or in portable mode. I didn’t try playing the game with a single Joy-Con, because that sounds terrible (using a single Joy-Con has never felt comfortable for any game).

The online features drag the experience down a bit. If you’re someone hoping for a good online multiplayer experience with Ultimate, you’ll be disappointed. But if you’re looking for a fun fighting games to play with friends on a couch, nothing serves you better than Super Smash Bros. Ultimate.

Super Smash Bros. Ultimate released on December 7 for Switch. Nintendo gave us a physical copy of the game for this review.