A few months ago I bumbled along to a Gamescom appointment to see a new game from Innerspace, a VR developer I’d grown much respect for after experiencing its Firebird series. I’d assumed there would be another delightful little experiment to enjoy in its latest title, A Fisherman’s Tale, but I wasn’t quite prepared for the degree at which the game would break my brain.

Four months on and I’ve just played it again. Much to my relief, it still manages to amaze me.

In A Fisherman’s Tale you play as a puppet fisherman that’s confined to his cozy lighthouse home. He awakens one night to find that all is not right with his comfy abode, and sets out on a supernatural adventure unlike anything else you’ve seen. I played through the game’s second chapter last week and instantly fell back into my state of enamored admiration for what Innerspace is trying to do. Here’s why.

The first two chapters of A Fisherman’s Tale revolve around one of the most immediately engaging and mind-blowing concepts I’ve seen in VR. Inside the fisherman’s lighthouse there is a model of … the fisherman’s lighthouse. But this is no simple diorama; remove the roof of the hut and you’ll see the ceiling above you disappear. Peer down into the model below and, sure enough, there’s a miniature version of yourself mirroring your every move. Open the window and you’ll look out to see a bigger version of the room surrounding you.

It takes a few minutes to fully adjust to the eye-opening ramifications of this mechanic (during which you’ll probably try and poke yourself with your own giant finger) but once you manage to get a grasp on it, it gives way to some truly impressive puzzling. Need a smaller version of an item to solve a puzzle? Reach into the model and pull the mini-me edition out. Need something bigger? Drop that item into the scene from above and it’ll fall right in front of you at an enlarged sign.

It’s difficult to believe that it works so well, but it really does. And the game puts it to great use in the first two chapters, twisting the concept in several ways and mining it for all it’s worth. And it all works so well because you simply believe that there are worlds within worlds around you.

As captivating as this device is, though, I could easily see it running thin before the game’s credits roll. Fortunately, Innerspace has reassured me multiple times that the remaining chapters will introduce some new twists of their own and won’t lean as heavily on this concept. Wondering what other kinds of virtual acid trips the developer is preparing for later on has me very anxious to get my hands on the full game.

There’s a lot that Innerspace could do with this world beyond that initial idea. In my first two demos I moved between two rooms of the lighthouse and met some pretty strange characters along the way. It leaves you with a genuine sense that anything could be around the next corner. 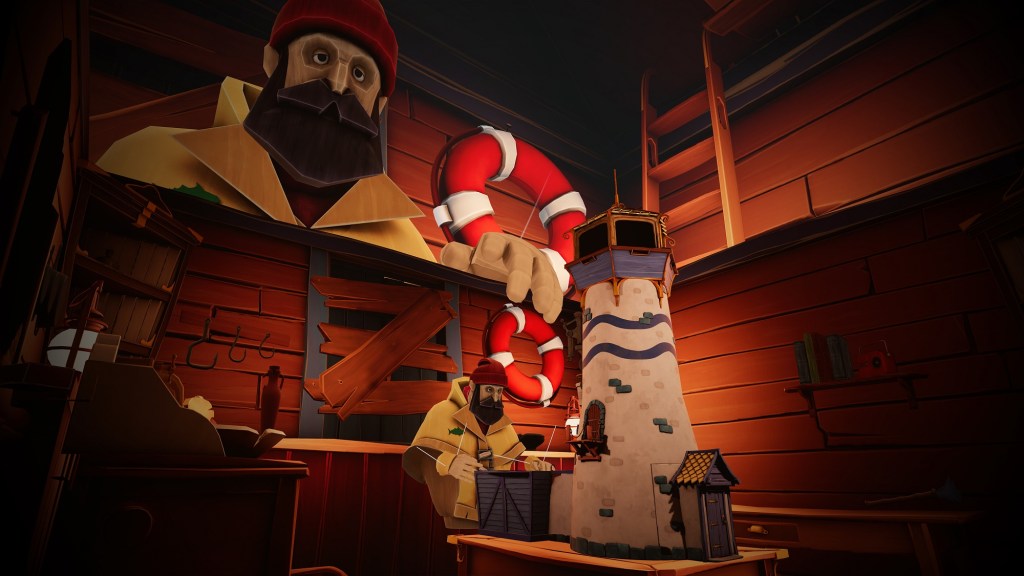 Above: One day, I want to hang out with a big picture of myself hanging over me.

In the two chapters I’ve played of A Fisherman’s Tale the game has really only begun to scratch the surface of a deeper mystery at the heart of the story. Why is this fisherman locked away in the solitude of his lighthouse? Why are his ornaments suddenly coming to life and taking him on fantastical adventures? What’s with the cutscenes that pop up between chapters?

You get the sense that all of this is mounting to a bigger reveal, one that perhaps might involve a little more trauma than the game’s whimsical charm has let on thus far. If Innerspace can nail the narrative aspect of the game, it might be enough to elevate this to one of VR’s first truly essential titles.

Despite it being the team’s first game, A Fisherman’s Tale is undoubtedly an Innerspace experience. From the comfy confines of the lighthouse to the gentle tones of the narrator, the game boasts a wholesome sheen that makes it an utter delight to simply exist in. Your home is decorated down to the tiniest of details, and the wooden walls and floorboards feel worn and authentic. The setting is as much of a character as you are.

At times A Fisherman’s Tale feels like a poem in motion. The writing is sharp and deliberate and there’s a seamlessness to transitioning between model and ‘reality’ that never fails to amaze you. It’s an experience that works with your brain in a way that staves off frustration.

It’s very much the sum of all of these parts that makes A Fisherman’s Tale something that feels genuinely new. This isn’t a VR game about fulfilling your dreams but instead taking you beyond them. Innerspace understands that there’s a whole other world beyond the limits of human imagination to explore with VR and it’s one of a precious few studios capitalizing on that.

Perhaps that’s all hyperbole; perhaps when all is said and done A Fisherman’s Tale will simply go down as an enjoyable, if compact little puzzler. But I’m willing to bet it’s bigger than that.