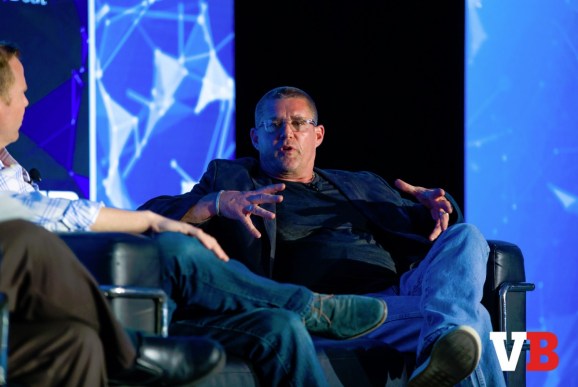 Glen Schofield of Sledgehammer Games talks about the passion that drove Call of Duty: WWII at GamesBeat Summit 2017.

Glen Schofield, co-creator of several Call of Duty games, announced today on Twitter that he was leaving Sledgehammer Games, the game studio he cofounded in 2009 with Michael Condrey.

Schofield and Condrey worked together at Electronic Arts’s Visceral Games studio before starting Sledgehammer, with work that culminated in the hit title Dead Space.

They started Sledgehammer Games in San Mateo, California, not far from their old Visceral location, and they began hiring a team that would become hundreds of people. They were enlisted to help with Activision’s Call of Duty: Black Ops title in 2010 and Call of Duty: Modern Warfare in 2011.

I’ve had a great run here at Activision; 3 COD’s- MW3, AW and WWll- that I’m proud of. I feel it’s time to try something new tho. I’ll be leaving Activision end of Dec. and taking some time off to relax. Then off to something else exciting.
Thank u Activision for everything!

But their first solo effort under Activision was Call of Duty: Advanced Warfare, which debuted in 2014. Most recently, Schofield and Condrey headed the team that produced Call of Duty: WWII in 2017.

Glen's body of work and career in video games has been extraordinary. He's made lasting contributions and left an indelible impression during his time at Activision.

We thank him for his leadership, and vision. We wish Glen continued success. https://t.co/FzSze1sJFG

Schofield and Condrey spoke about the development of Call of Duty: WWII at our GamesBeat Summit event in 2017.