New World Interactive isn’t interested in creating yet another generic shooter. The indie studio only cares about one thing: making sure that Insurgency: Sandstorm is one of the most intense and yet rewarding multiplayer experiences you’ll ever have.

Lead game designer Michael Tsarouhas knew they were on the right path when one of their military consultants, a former soldier in the U.S. Army who fought in Afghanistan, told him that one particular sound effect in the game triggered a profound emotional reaction.

“He heard the mortar shells landing, and he said he never heard it so realistically depicted — this ‘wet thwap’ I think was the way he described it, the smack, the slap of it against the ground,” said Tsarouhas. “It was so intense that it brought him to tears.”

It’s just one of many stories that New World has heard from veterans who play its games. That realism has been a core part of the studio’s DNA since its founding in 2010, when Jeremy Blum (one of the minds behind the 2007 Half-Life 2 mod Insurgency: Modern Infantry Combat) brought back some of his fellow modders to make a standalone version of their creation.

That game, which was simply called Insurgency, came out in 2014 on PC and quickly became popular among players looking for a hardcore multiplayer shooter. With more than five million copies sold, it was only a matter of time before New World set out to make a sequel.

Coming to PC on December 12 (with a console version following in 2019), Insurgency: Sandstorm is set in a fictional conflict in the Middle East, with players fighting for either the government-led Security forces or the Insurgents. It keeps the same elements that made the first game so compelling — a minimal HUD, realistic gunplay, and objective-based modes — and adds in a number of new features, including bigger maps and armed vehicles.

“The core Insurgency experience is still there, where people die really quickly and you have to work together and play as a team,” said Tsarouhas. 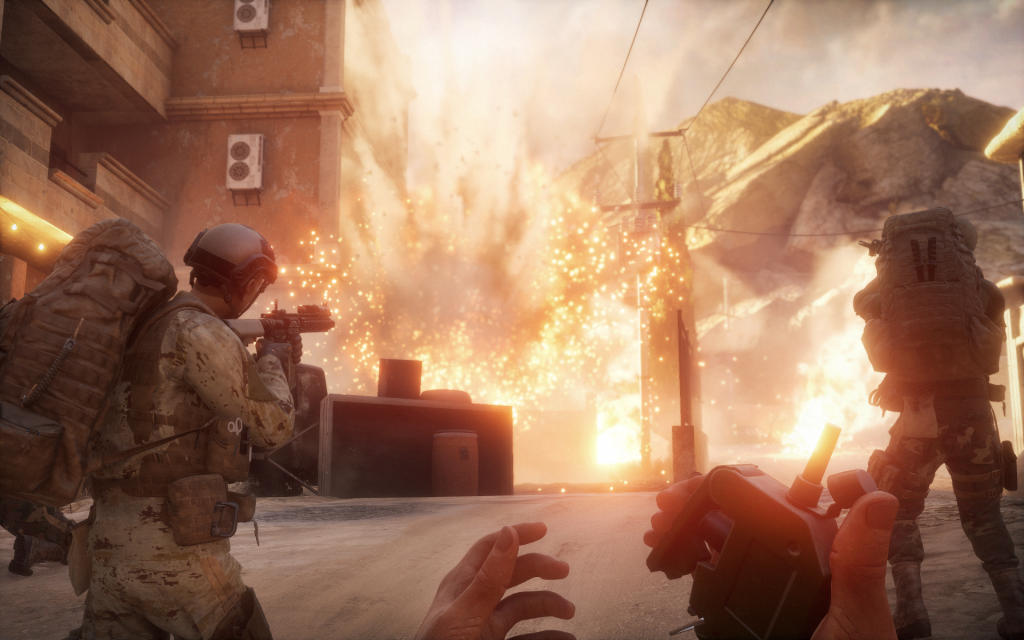 Investing in the immersion

While Sandstorm depicts a made-up war, the developers spent a lot of time researching actual conflicts (like those happening in Yemen, Syria, and Afghanistan) and talking to ex-soldiers to make sure it feels like a credible campaign. For example, another one of their consultants provided them with GoPro footage from recent fighting in Iraq.

Level designers then used the videos, which depict hectic gunfights as well as moments of downtime, as reference for building out Sandstorm’s multiplayer maps.

“I interviewed local fighters and learned about how the concept of insurgency evolved from 2010 to 2018,” said Tsarouhas. “There hasn’t really been a game about that. It’s all been like Iraq and Afghanistan pre-2008. And we found interesting stuff, like the weapons that are being used by various factions, the vehicles, the kinds of air support and fire support you encounter.”

“That’s a big deal: You never play as an Iraqi in a game about the Iraq War, right? Unless you’re the insurgents or the rebels or the terrorists. That’s not so in our game. Now you can play as indigenous fighters, but also as special operations, as mercenaries, and all these different things.”

Ultimately, the fictional premise allows New World more flexibility when it comes to the type of weapons, equipment, and infantry it wants to use in the game. It also lets Sandstorm have a robust customization feature. When creating your character, you can change your appearance, your gender, your clothing, and the voice-over that you want to use. Each of the VO options, which include soldiers from various backgrounds, have around 1,200 lines of dialogue each — something you wouldn’t normally expect from a multiplayer game.

But as with the first Insurgency, good audio is crucial when it comes to creating a grounded combat experience. The dialogue changes depending on what kind of context you’re in. For instance, what your character says when they’re reloading normally (yelling loudly to teammates to overcome the din of battle) and when they’re reloading while under fire are quite different to reflect the intensity of the situation.

Continuing the franchise’s reputation for strong and varied voice acting is something Tsarouhas takes great pride in, as he originally entered the industry as a voice actor (he wrote and acted out most of the dialogue in Insurgency).

“We need that variety so you don’t hear the same things over and over. In my opinion, a lot of games don’t care enough about aesthetics, and that includes voice-over,” he said. “So it’s something that’s really important to us because our game is supposed to be intense. It’s supposed to be scary and you should really feel invested. We want people to feel immersed and this is all a big part of it.”

New World plans on adding more voice-over options in the future, as well as new weapons, maps, customization items, and mod support — for free. That kind of extensive post-launch content is what helped make Insurgency such a huge success for the young studio, and in that respect, it doesn’t want to change a thing.

As much effort as New World put into making Sandstorm look and sound like a real war (especially now that it uses Unreal Engine 4 instead of the aging Source engine), it still understands that at the end of the day, the combat needs to be fun. Insurgency’s core gameplay isn’t quite on the simulation level of something like the Arma series or Escape from Tarkov, but at the same time, it’s also vastly different from the arcade-like offerings seen in Battlefield and Call of Duty.

The developers like to think Insurgency and Insurgency: Sandstorm creates their own style, somewhere in the middle of those extremes with their mix of cooperative (fighting against A.I. bots) and competitive modes. They’re the kind of games that are easy to learn and yet hard to master.

“We want people to get scared when they play. We want people to feel invested in the action,” said Tsarouhas. “When they finally capture that objective, it’s a big deal. Everything reinforces this: how quickly you die, the audio, the fact that there are no medics. … All this comes together to make a scary, tense experience.”

You can save 10 percent off Insurgency: Sandstorm by pre-purchasing the game on Steam. Owners of the original Insurgency (2014) tile can also save an additional 10% until the end of Mach 2019 via New World Interactive’s loyalty discount.