U.K.-based startup Synthace wants to automate laboratory processes with a programming language designed for biological experiments, and it’s getting the financial backing to do it.

The company today announced that it’s raised $25.6 million in a series B funding round led by Horizons Ventures, with participation from Luminous Ventures, SOSV, and individual investors. It follows a $9.6 million series A raise in September 2017, bringing Synthace’s total venture capital haul to $35.2 million.

The proceeds will be used to drive product development and expand the company’s customer base, CEO Tim Fell said.

“Digital-to-physical workflows have transformed the semiconductor, aerospace, automobile, and many other industries,” he said. “Now it is the turn of the biotechnology industry, and we are grateful for the support of Horizons Ventures and our other new investment partners who share Synthace’s vision of how to facilitate that change.”

Antha’s drag-and-drop visual dashboard provides access to a collection of preconfigured lab hardware and equipment profiles, in addition to simulation and error-checking features that allow customers to consider hundreds of variables simultaneously in optimizing their designs. And it integrates with a number of third-party software and services including Microsoft’s Azure, GitLab, Google Cloud, Tableau, and Spotfire. 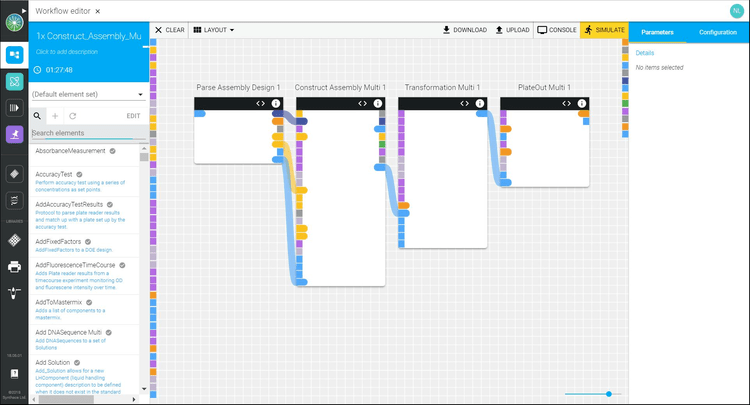 “It is simply not good enough that it takes 13 years to develop a new crop trait or $2.6 billion to bring a drug to market,” Fell said. “The pharma industry has a negative productivity curve stretching back 60 years. Meanwhile, the semiconductor industry has been marching to the beat of Moore’s law. Biotechnology desperately needs to move forward, and we know from other industries software driven design, development, and manufacture is crucial to that transition.”

Synthace appears to be leading the charge. Since its founding in 2011 and the launch of its minimum viable product (MVP) in 2016, the startup has signed on Dow AgroSciences, Merck & Co, GSK, and Fujifilm Diosynth as customers, and launched a partnership with Cambridge Consultants in April to help onboard new clients.

It’s picked up accolades along the way. In 2016, the World Economic Forum (WEF) included Synthace in its selection of the world’s 30 most promising Technology Pioneers, a list of early-stage companies poised to (in WEF’s words) “have a significant impact on business and society.” And this summer, Gartner awarded it a Cool Vendor distinction in the Life Sciences category.

“We are at a pivotal point in the development and use of biotechnology,” Horizons Ventures’ Patrick Zhang said. “We believe that Synthace will lead the industry’s transition to Computer Aided Biology, owing to its truly disruptive and cutting-edge technology. We look forward to working with the team on this next exciting stage of Synthace’s development.”