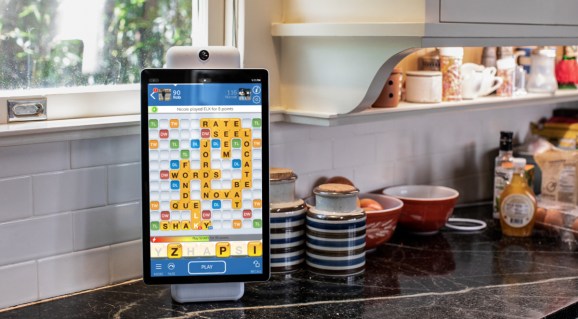 The updates are part of Facebook’s efforts to convince consumers to buy the Portal over Google’s Home Hub and Amazon’s Echo Show.

Unique to Portal are an AI-powered camera and volume for enhanced video calls, and developers and third-party businesses will be invited to take part in growing an ecosystem around in-call AR experiences and Portal apps.

The Portal smart display made its debut for customers in the U.S. last month and was the first device created in-house by Facebook’s Building 8 skunkworks operation. Along with the Portal launch, Facebook made a Portal team to create devices under its AR/VR division for consumer electronics.

Custom camera control being added today will allow users to do a simple pinch and zoom to focus the camera in a specific place in the frame of view.

Custom control during video calls is being incorporated into Smart Camera, the AI-powered feature for Portal that frames video calls by recognizing the location of people in front of the camera’s 140-degree view. Custom camera control comes in addition to Highlight, a feature available at launch that can automatically follow a person’s face during a call.

Also added today: a web browser for skimming the internet and sites like YouTube, as well as Portal apps for CNN and ABC News. Streaming audio from iHeartRadio has also been added to the list of things you can do during Portal video calls.

You will also be able to call people based on the relationship you have indicated in the Facebook app, so you can say “call mom,” for example.

Experiences people can have during calls are also changing: Holiday-themed augmented reality camera effects are now available, and new content is being added for Storytime, a feature that places you at the center of an AR story.

In addition to Portal and Portal+, Facebook is reportedly planning to release a video camera and streaming video device in spring 2019. They will likely compete with Amazon’s Fire TV stick and Google’s Chromecast, which can be controlled with Alexa and Google Assistant through Amazon’s line of Echo speakers and Google’s line of Home speakers, respectively.