Unlike televisions, computer monitors can take on different shapes. Your monitor probably has a 16:9 ratio (where for every 16 horizontal inches you get 9 vertical inches), but companies like Samsung and HP have also made 16:10 displays for years. More recently, a group of ultrawide 21:9 options have started to win over the hearts of gaming enthusiasts. These long monitors work really well for games, like first-person shooters, because they make a high field-of-view feel more natural.

But what do you do when ultrawide isn’t wide enough? Well, that’s where Samsung steps in with its $1,000 CHG90 and its 32:9 aspect ratio. The CHG90 is a curved HDR FreeSync 2 monitor that measures 49 inches diagonally. It is a big boy.

That 32:9 ratio means that it is equivalent to two 24-inch 16:9 monitors sitting side-by-side. And whether that sounds absurd or awesome to you, you’re right. But all of the questions you have about fitting such a large and wide monitor into your life are valid — even if the CHG90 is excellent.

A 49-inch super ultrawide monitor has some inherent problems just because you’re probably not used to it. It is going to fit awkwardly on a lot of desks. You’ll need to take some time to get accustomed to using it. Not every game works well with it. And even the most widescreen of films don’t use all of the available real estate.

But when everything is working as intended, which is most of the time, the effect is stunning. The display engulfs the entirety of my lateral vision. It can comfortably fit four full-sized Chrome windows at the same time. And it just looks impressive sitting on a desk.

Even in pictures, you can see just how imposing the CHG90 is. 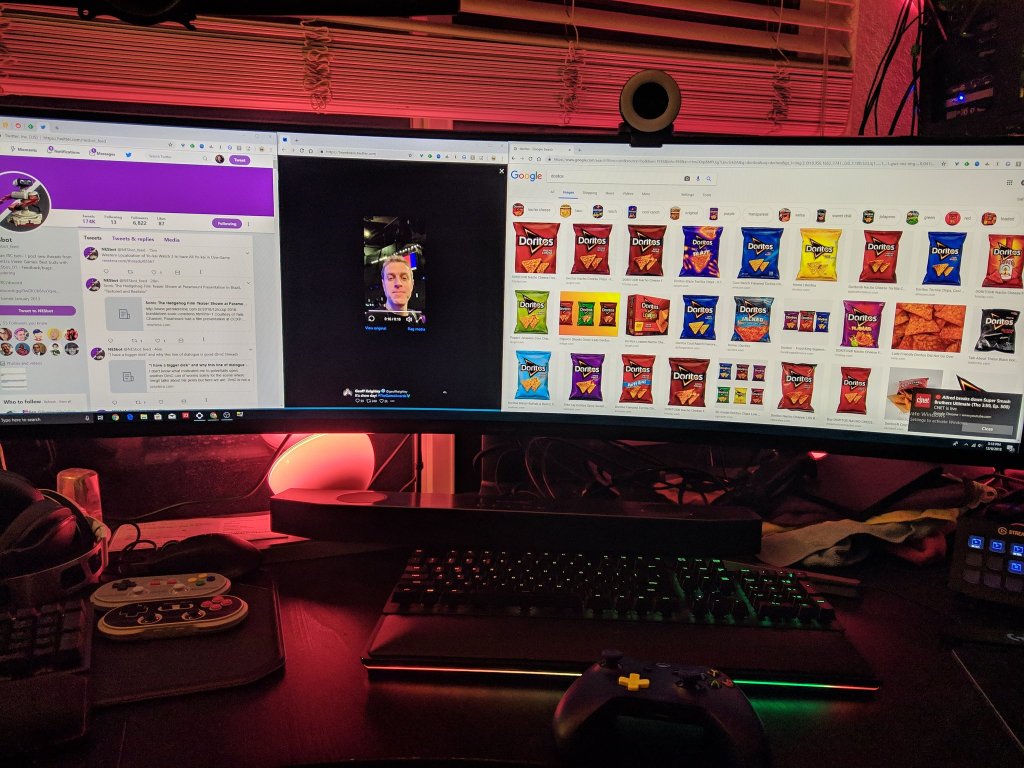 Above: It’s a very big boy.

But it’s in games where Samsung’s super ultrawide is the most effective. In a game like Dusk or Rainbow Six: Siege, I can turn up the in-game field-of-view setting to the max, sit back a bit from the screen, and let the sights of the game overtake my vision.

The CHG90 is not a gimmick panel. It’s a high-quality display that also just happens to have a 32:9 aspect ratio. It has FreeSync 2 with HDR and a refresh rate of 144 Hz.

Its color reproduction is accurate and rich. The current generation of Samsung monitors are all known for this, and the CHG90 maintains that quality. The display uses the company’s QLED tech in a VA panel. It isn’t on par with OLED, but it is top-of-the-line for LCD. And the LEDs that provide the backlighting are nicely spaced so that color reproduction is uniform across all 49 diagonal inches.

Like other recent Samsung panels, the monitor has excellent response times in the 5ms-to-9ms range. The monitor is better at flashing from white to black than from black to white, but it is always fast enough to avoid that ghosting effect where images linger longer than they should.

It does have some mild input lag in the 15-to-17 ms range when compared to a CRT monitor (that has 0 input lag). That’s enough that you wouldn’t want to use it for esports, but a 32:9 monitor isn’t even tournament legal anyway. For everyone else, you’re not going to notice anything.

On top of all of that, the CHG90 has some of the best implementation of HDR in a computer monitor. Now, that’s not saying a lot. I’m still of the opinion that PC HDR is weak and generally disappointing. The CHG90 doesn’t really change my mind about that, but it is at least doing all of the basics really well.

The CHG90 is VESA certified for DisplayHDR 600, which means it can produce a peak brightness of 600 nits (a standard unit of illumination). That is better than most monitors, which are DisplayHDR 400. It’s still not DisplayHDR 1000, but it’s more noticeable than 400-nit panels.

Additionally, Samsung has really great local-dimming LED arrays. This means you won’t get a lot of light bleeding from a bright part of a scene into its shadowy elements.

I still mostly want to wait for OLED monitors to see what they can do for HDR, but I know they will cost quite a lot. So at least the HDR in the CHG90 is decent enough that it feels like a bonus on top of everything else.

It is more comfortable to use than you would imagine

If you’re going to get a 32:9 monitor, you should know going in that you won’t be able to see all of it at once without turning your head. It’s just like using multiple monitors except it’s one continuous panel. So if you move one side closer, the other side is going to move further away..

You will get used to that pretty quickly. A lot of it just comes down to figuring out the best way to arrange your windows for work or productivity. You won’t want to make a text window fullscreen. The trick is to play around to find out how wide you want to make it.

But Samsung helps this by making the CHG90 very easy to adjust. The company built the monitor onto a stand with multiple points of articulation. And it’s easy enough to do with one hand and while sitting down. So you can reach out and tilt the monitor, swivel left or right, and move it up and down. And once you have it in the right position, the display doesn’t sway or drift out of place.

It all feels like the monitor costs $1,000, and the stand is a major reason that I’ve been able to comfortably use the CHG90 on a daily basis. Having the option to quickly pull one side of the screen closer to me with little effort is huge.

Works surprisingly well with most games

But this is a gaming monitor, and that’s where it excels. And thankfully, most games just automatically work with this extra-wide aspect ratio. The most consistent problems are with cutscenes. Those videos often come precompressed and optimized for 16:9 displays, and games just try to stretch them out to fit into a 32:9 fullscreen window. That’s ugly. I’ve also occasionally seen similar problems with menus.

But for the most part, games just work. At worst, a background image on a menu will have its top and lower thirds chopped off. Or like in Far: Lone Sails, the skybox glitches on the far edges. In those circumstances, the games are always playable. To that point, I played through the entirety of Far: Lone Sails with that problem, and I stopped noticing it after a while because the action is mostly happening near the middle of the screen.

I know these are all negatives, but I was expecting to encounter issues constantly. But that isn’t my experience. The only game that I really struggled to play on this monitor is Fallout 76 — but like, c’mon.

By far the biggest issue with the CHG90 is the resolution. It is 3840-by-1080, which means it is essentially a 1080p display. But while most 1080p monitors have a pixel density of about 90 PPI (pixels per inch), this panel only has 80 PPI. The result is that the CHG90 isn’t great for text. You almost certainly won’t notice that resolution during gaming because you need to sit back slightly to see all of the screen at once. And that pixel density matters a lot less when you start getting 3 or 4 feet away. But if you are sitting up and staring at a news story or trying to write this review, for example, you’re going to notice some aliasing on the text that is absent on 1440p and especially 4K panels.

If you primarily want this monitor for gaming, though, the resolution is only a problem on paper. It’s not going to hurt your enjoyment while actually using it.

It’s bigger than you think

So the CHG90 is more comfortable than you would think, but let’s be clear: it’s also still bigger than you’re expecting. You’re going to need a lot of room on your desk. This is not like having two monitors where you can have one in front of you and another at an angle to your side.

The point here is that if you want a 32:9 super ultrawide monitor with 49 diagonal inches of screen, you should probably build your entire rig around it. Buy the $1,000 monitor first, and then get a desk that fits it. That’s not to suggest that it won’t fit on most standard surfaces. It will. But you may just not have as much space left over for things like desk speakers when you’re done.

The first part of this conclusion is for everyone reading this who would never buy a $1,000 monitor. If you’re looking for validation to think this thing is stupid, you have it. It is unnecessary and unwieldy. And you are perfectly fine going with multiple monitors or a 21:9 ultrawide. You don’t need this.

OK, this second part is for the rest of you. It’s awesome. It looks cool because it is cool. If you are working with text all day for your job, you’ll probably want something different. If this is for your dedicated gaming machine, and you have a monitor budget of $1,000, then you’re going to love it.

The CHG90 is available now for $1,000. Samsung provided a loaner unit for the purpose of this review.