Pixowl, the maker of The Sandbox voxel-based game world, has created a $2 million Creator Fund that it will use to reward artists for creating items on its blockchain-based gaming platform.

Animoca Brands bought Pixowl in August for $4.875 million, in part because of that company’s plan to move into nonfungible tokens, or blockchain-based technology that can be used to uniquely identify items in games. These tokens can be used to reward artists for creating experiences in the new version of The Sandbox, which is a voxel-based world with blocky characters on mobile devices.

Other kinds of games, CryptoKitties, are adopting blockchain technology to enable owners to actually own the items that they create or buy in the games. Pixowl has been building The Sandbox community for more than six years, and the goal is to reward players who take the company’s tools to build even more things inside the world, said Arthur Madrid, CEO of Pixowl, in an interview with GamesBeat.

Approved creators making new content will be rewarded with grants in their choice of fiat currency (like U.S. dollars) or cryptocurrency (including the platform’s own ERC-20 SAND token, which will mainly be used in Pixowl’s ecosystem). The Sandbox is a community-driven platform where creators can monetize voxel (using the pixelated style) assets and gaming experiences.

“We believe voxels are a big opportunity because so many users know how to create with them,” Madrid said. “They could build things, using these ‘digital Legos.'” 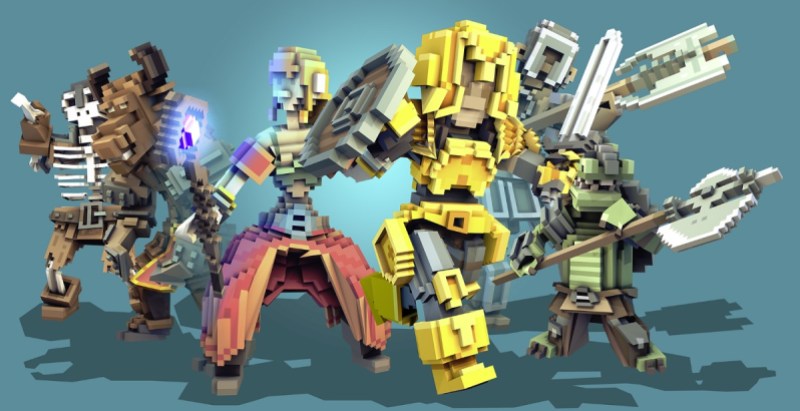 Above: The Sandbox has voxel art where users create the characters.

The Sandbox has 40 million installs and 1.2 million monthly active users on mobile. But the 2D game remains far smaller than rivals like Minecraft or Roblox. Fortnite, which lets its creators build their own items, is also a competitor, but it isn’t doing blockchain yet.

Pixowl will make a decentralized 3D version of The Sandbox on the blockchain, which is a transparent and secure decentralized ledger. That will allow PC and Mac users to monetize the non-fungible tokens (NFTs) that they use in the game.

“We’ve been building the existing 2D mobile game, The Sandbox, for six years,” said Sebastien Borget, chief operating officer, in an interview. “It’s a great mobile game. But we feel like we have a unique opportunity, taking the franchise we own, and adding multiplayer PC, adding a full experience for players, and the new blockchain technology as well so we can disrupt the two main competitors on the market. We can fill out the space that has not been completely covered by them.”

The Sandbox for blockchain aims to disrupt the market by providing the first blockchain platform in competition with rivals like Roblox or Minecraft. It will offer its large community of creators its own NFT builder gaming ecosystem.

“With The Sandbox, we are developing the first User Generated Content NFT marketplace and providing a decentralized future for content discovery,” said Madrid. “Our new Creator Fund offers an attractive option for creators to really own their assets while making money through publishing their creations on our platform.”

In The Sandbox, any creative person can make their very own static or animated voxel objects. It’s as easy as using children’s toy building blocks, and the creative process is aided by the platform’s intuitive VoxEdit tool that will allow anyone to create and animate NFT objects from scratch or import existing creations. 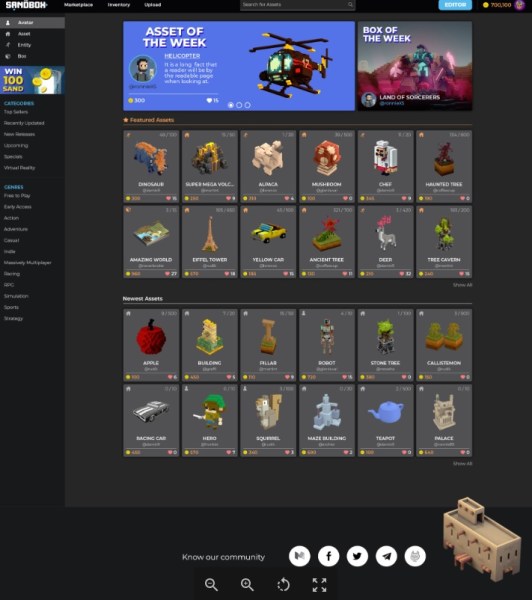 Above: The user-created marketplace of The Sandbox.

For the first time, creators will be able to publish their voxel creations on the blockchain as NFTs, or virtual tokens ensuring digital scarcity, security and authenticity without the limitations of central control. Models made by artists will be unique and their scarcity provable on the blockchain in perpetuity, allowing them to be freely and securely traded in The Sandbox as well as on third-party NFT marketplaces including OPSkins/WAX, a leading NFT exchange, and many others.

With true ownership of their NFTs, creators will hold a vested interest in success of The Sandbox.

“We have been investing a lot in this new game,” Madrid said. “You can really feel it is a different universe. The goal is to pay over 1,000 artists over the next two years. We will use part of our cash flow to build a user-generated content marketplace of NFTs. In the next few months, we expect to reach 10,000 assets available. They will be available for any creators to create games on The Sandbox.”

“The combination of the Creator Fund and our VoxEdit tool set provide an incentive for artists to get into The Sandbox early, potentially making their NFT assets the go-to models in their respective category,” said Madrid. “We want to fast track our vision of a voxel building platform online, as titles like Minecraft and Roblox have shown that creators of all ages can build online user-generated content beautifully and at scale.”

The Sandbox’s Creator Fund is an initiative supporting all talent without any distinction of age, sex, or country of origin. Money from the fund will predominantly be used to pay for artists to submit original voxel models via grants on a per asset basis. Ultimately, the goal would be to create assets that can be taken across platforms, from one game to another, Madrid said.

Above: The Sandbox makes it easy for players to create art.

“The probability is good that those assets could be used in another game beyond The Sandbox,” Madrid said. “The goal is to invest money to convince artists that creating NFTs is an opportunity to monetize on the blockchain, which brings true ownership. The tokenization of the asset enables it to be traded more easily.”

Artists will be able to register to qualify for grants, submitting their voxel models to The Sandbox team for approval. The Creator Fund is a revolving fund that will be replenished using transaction fees from the game’s marketplace. The marketplace is scheduled to launch in the second quarter of 2019. Madrid hopes the tools and the market and the tokens will be interoperable with other game worlds.

Artists can visit fund.sandbox.game to sign up to get notified when the fund begins taking applications.

Further details on the Creator Fund will be unveiled on the company’s Medium channel at medium.com/sandbox-game in the future.

Madrid and Borget founded Pixowl in San Francisco in 2011, with development studios in Buenos Aires.