Even Master Chief, the hero of the Halo universe, needs a guardian. And Bonnie Ross, Microsoft’s corporate vice president and head of 343 Industries, has been doing that job for more than a decade.

For her work on the Halo franchise and her promotion of STEM (science, technology, engineering, and math) education for women, under-represented minorities, and children, Ross is being inducted into the Academy of Interactive Arts & Sciences Hall of Fame.

Ross is the 23rd recipient of the prestigious award from the peer-run body, the AIAS. In her role, Ross oversees the Halo franchise that has generated nearly $6 billion in worldwide sales to date.

The 2019 Hall of Fame Award will be presented to Ross during the 22nd Annual DICE Awards ceremony on Wednesday, February 13, 2019, at the DICE Summit event at the Aria Convention Center in Las Vegas. Ross’ long-time colleague and friend, Phil Spencer, head of gaming at Microsoft, will present the award.

I interviewed Ross about her award and her stewardship of Master Chief. Here’s an edited transcript of our interview. 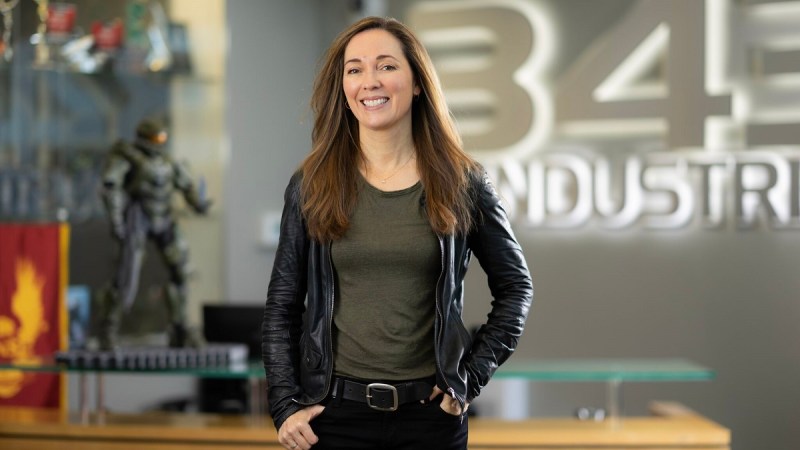 Above: Bonnie Ross of Microsoft is getting the Hall of Fame award for AIAS.

GamesBeat: Congratulations on your award.

GamesBeat: They are recognizing you for a long career. I guess it seems like you’d call it a Halo.

Ross: [Laughs]. It is. I think that the things that they recognize and obviously the work that I’ve done a Halo and then also the work on diversity and STEM. It was really meaningful to me that it played a role in it as well. I’m passionate about Halo and diversity and gaming.

GamesBeat: What do you think has sustained your interest in that over the years?

Ross: I’ve been a fan of Halo in since the beginning. I’m a huge science fiction reader. Or was. I haven’t really had as much time to read it since I’ve taken over Halo. But when we first shipped Halo I was working on Zoo Tycoon. We released The Fall of Reach book about a month before the game. And so, for me, reading the book and John’s backstory, and then playing the game, really had an emotional impact on how important Halo is to me. I have always been passionate about the game and being able to take over the franchise and steward the franchise after Bungie left was really one of the most amazing career opportunities. It was the opportunity of a lifetime.

And then I say for the STEM side, I was a college hire for Microsoft and came for technology, but I’m not sure I would have stayed if I hadn’t found gaming. For me, gaming really sort of connected the dots of what you can do with technology. I believe, like gaming is technology empowering art, creativity, and storytelling. That made a difference in my passion and that created the passion of how do I connect the dots for other young women and minorities to kind of get more people in gaming.

GamesBeat: How did you get drawn to tech in the first place?

Ross: My dad was an engineer. And he told me I was going to be an engineer. So I didn’t really have a choice going in. I didn’t think I had a choice. But you know, a lot of the research that we’ve done at Microsoft is about having a mentor, whether it be your parents or someone else, is really key. It means helping girls and other kids and minorities thinking that it is a possible career. I look to how to how can I be a mentor and how can I be a figure that opens up the possibilities for others. How do I give back there? 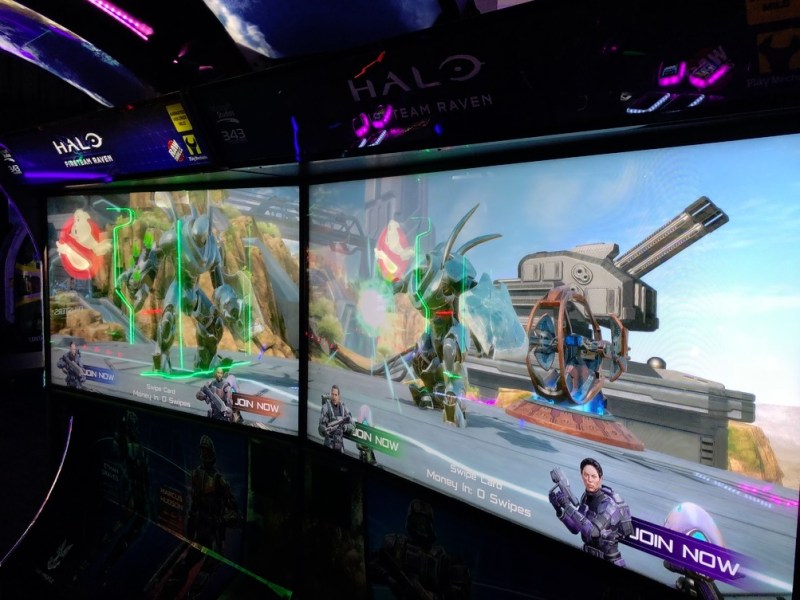 Above: Halo: Fireteam Raven at the mall.

GamesBeat: A lot of lot of creative people hop from thing to thing or from franchise to franchise or even company to company. Why do you think you stayed with this one company for so long?

Ross: That’s a good question. The luxury I think I’ve had in working on the PC games and sports games from before is that we were a platform company working games. It’s just a diversity of games that we can work on within the Xbox portfolio. I never felt the need to go elsewhere. Because we have had so many different types of games in our portfolio. So there’s always been something that interested me. Then there was taking over the Halo franchise. This is a universe that I’m so passionate about. There are many stories that I want us to tell. So I’m here for a while.

GamesBeat: It’s quite a achievement. Do you ever questions to this effect? How do you explain to others who wonder why you don’t do something else? Do you want to do something besides Halo? Are you tired of Master Chief?

Ross: When I first took over the Halo franchise — you know Halo very well. But Halo One, Halo 2, and Halo 3 take place over three months of time. The fictional universe is huge. I looked at Halo as a universe, which is the most important character. We spent a ton of time in the early days of 343 just expanding the canvas, or framing the world in which we could tell stories and making it larger, adding more characters such that we could tell stories over the next two decades.

I look at Halo One, two and three as the beginning. How we can create a canvas upon which different artists can tell stories in this amazing universe is something that I’m just so passionate about. I feel like it’s such a large world and universe and there’s so much stuff we can we can do so I kind of I have my dream job. I feel like there’s so much more work to do and super excited about all the things we’re doing going forward. I’m super excited about Halo: Infinite and about the Showtime series. There’s a lot more Halo stories to tell. It’s such an amazing universe.

GamesBeat: I guess even if you didn’t actually star the franchise, this has really paid off.

Ross: I feel so lucky. Bungie created this universe that I escaped into, and I fell in love with, and it is such an amazing opportunity to be able to be the steward and guardian of that universe going forward. I’m forever grateful to the work that Bungie did. 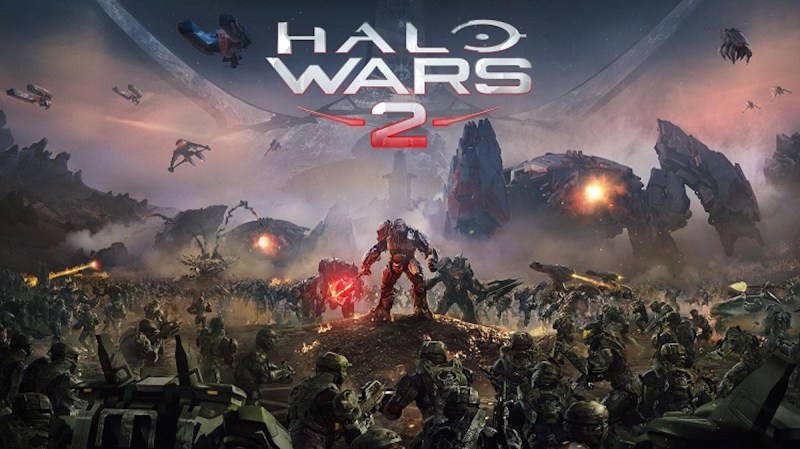 GamesBeat: On the diversity side, gaming can make it a very controversial place. And you don’t seem to immerse yourself in that controversy. You you do what you do without being at the center of a storm. How do you how do you manage this?

I think that is really important to attracting more talent on the creator side of the industry. And I think it’s also really important in that gaming is entertainment for everyone. And, you know, there are over two billion gamers on the planet. Everyone games now. And I think I’m really proud that we’re working to sort of change the way that that looks.

GamesBeat: What kind of advice do you have for people who are coming behind you.

Ross: Yeah, like I was saying before, connecting the dots. Microsoft’s research on middle school has shown 91 percent of young girls see themselves as creative, but they don’t see technology as creative. And so I do a lot of talks in high schools and middle schools and colleges to kind of really help connect the dots, that technology is creative. And that that gaming is essentially like an interactive movie. There are so many different careers for artists or writers, or programmers or producers. There’s just so many different ways that young people can enter into the gaming industry. And yeah, I definitely encourage people to have some sort of technical background. You do not need it, but it helps. And so if you’re thinking about in college, getting a minor or major in computer science or doing a blended mix of something and a CS degree are all things that I encourage.

But also if you’re passionate about the gaming industry, you know, there’s so many different ways to get in and you should pursue your passion. 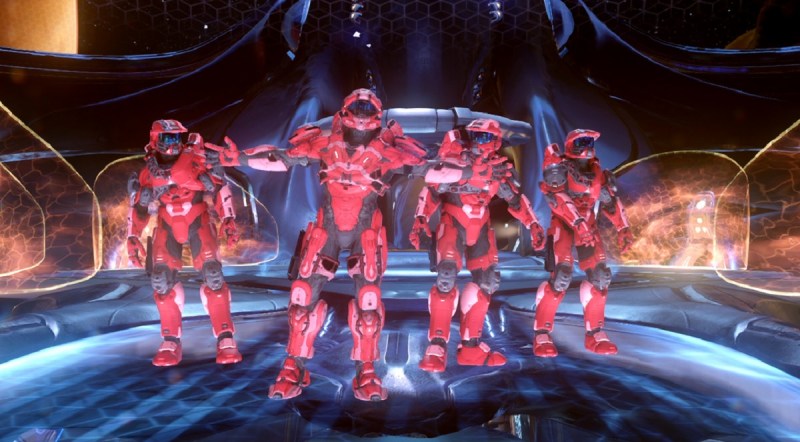 GamesBeat: And then what do you think about the community and where you’d like the gaming community to go?

Ross: On the Halo side, I think so lucky to have such a fanatical fan base that is very vocal about everything we do, positive and negative. When you look at where communities are, they’re a really vital and important part of, of game development. Now, it isn’t just about the creators story, it’s about the user story. I do think community is incredibly important.

If we’re talking about toxicity in the community, I think we all have a role in and helping create a better environment. And I do see improvement happening. When you look at all of us at Microsoft, Sony, and Nintendo, we spent a lot of time working together on how we can ensure that we’re creating an inclusive, accessible, environment because, you know, no one wants to play in an environment where people are saying things that don’t align with you.

GamesBeat: Do you feel there was a big decision you made somewhere along the way? What was one of your biggest decisions that you made or that you helped make?

Ross: I would say that taking over the Halo franchise was taking over an established business but creating a startup company to do that. The thing that I’m most proud of is building an amazing team. I am biased. But I would say that the 343 team has the most talented creators in the in the industry. And I would say, that’s the thing I’m most proud of. The work that they have done, the work we’re doing on Halo: Infinite is something that I am so proud.

GamesBeat: It seemed like that could have gone so wrong. The transition from Bungie to 343 was not an easy one, and it looks like it has turned out to be a great transition, with such a large fan base.

Ross: Honestly, we have made mistakes along the way. The community has helped us in creating good learning experiences for us. But I think that when I look at Halo, the universe is the most important character and we are stewards of the universe. And if we’re going to keep the universe alive and healthy, I think that we have to ensure that we are doing right by Halo.