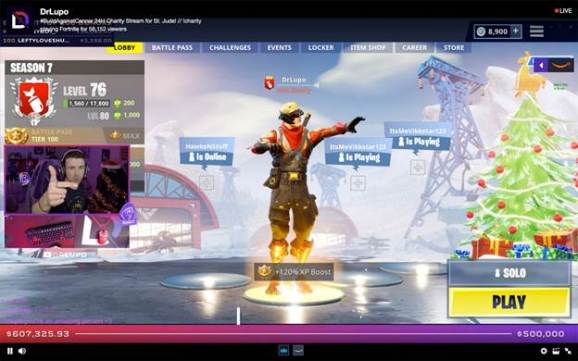 Gaming celebrity Benjamin “DrLupo” Lupo and his followers raised more than $611,000 for charity during a 24-hour Fortnite livestream Saturday. The money goes to support the mission of St. Jude Children’s Research Hospital.

For the full year, DrLupo has raised more than $1.3 million for the charity. The latest donations came in from 85 countries around the world.

“DrLupo, his fan base and the entire gaming community have truly embraced the St. Jude mission in a huge way,” said Richard Shadyac, CEO of ALSAC, the fundraising and awareness organization for St. Jude Children’s Research Hospital, in a statement. “To raise $1 million for the kids of St. Jude in just one year is an incredible milestone and makes him a leader among his gaming peers. By helping pioneer this innovative way of fundraising, he and his community are leading the charge for the future of fundraising by helping St. Jude continue to fight childhood cancer and other life-threatening diseases.”

Earlier this year, Lupo engaged his fans to give back during GuardianCon — a week-long, 24-hour-a-day gaming event that benefits the lifesaving mission of St. Jude. In total, Lupo is responsible for $659,000 of the total raised by GuardianCon, helping the event exceed its goal of $2.4 million. In addition, he launched the Build Against Cancer T-shirt campaign earlier this month in collaboration with Design by Humans, raising more than $140,000.

Because of supporters like DrLupo, families at St. Jude never receive a bill for treatment, travel, housing, or food.

“One of the best parts of being a streamer is seeing communities of people form, and working with those communities to help benefit others and leave a legacy of positivity,” Lupo said in a statement. “Having the opportunity to engage the gaming community in the mission of St. Jude has been life changing, and I’m so grateful to continue to be a part of this legacy to show the good that gaming will do to change people’s lives.”

Lupo has also taken part in St. Jude Play Live, a program that allows creators to stream video games while raising money for kids at St. Jude and has raised more than $10 million in the last four years.