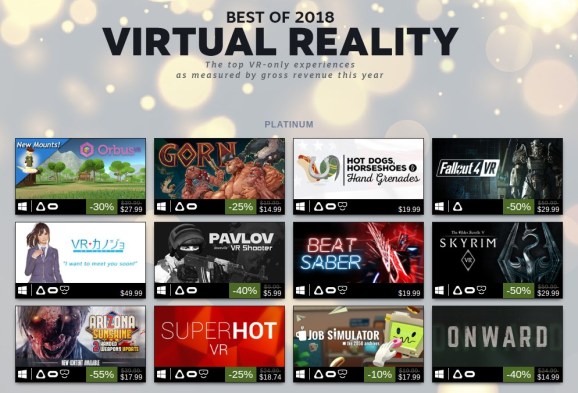 Valve released a list of the 100 top-selling VR games on Steam in 2018, and the biggest hit gets you off the couch and puts VR lightsabers into your hands.

More than 1,000 titles released on Steam this year with VR support, according to Bellevue, Washington-based Valve Corporation. The vast majority of the releases are VR-only but the only new 2018 VR release to reach the top “platinum” tier of gross revenue on Steam was Beat Saber — which sold more than 100,000 copies in its first month of availability on PC this year.

We’ve linked to our reviews below for most of the titles in the platinum, gold and silver tiers. Other top selling VR titles at the platinum level include Fallout 4, Gorn, Orbus, H3VR, Pavlov, Skyrim (which released on PC in 2018 but appeared on PSVR in 2017), Superhot, Job Simulator, Onward, Arizona Sunshine and one title intended for adults only.

You can check out the 2016 and 2017 lists as well, with a lot of titles on 2018’s list also represented in previous years.  The full list on Steam also includes 60 games at the bronze tier as well as a new section this year that lists top releases of 2018.