Sony’s PlayStation once again took first place for the most-seen gaming industry commercials, its third time in a row. Meanwhile, Nintendo edged up a bit with 21.4 percent of TV ad impressions for gaming brands, while chart newcomer Oculus VR made an appearance at No. 4. 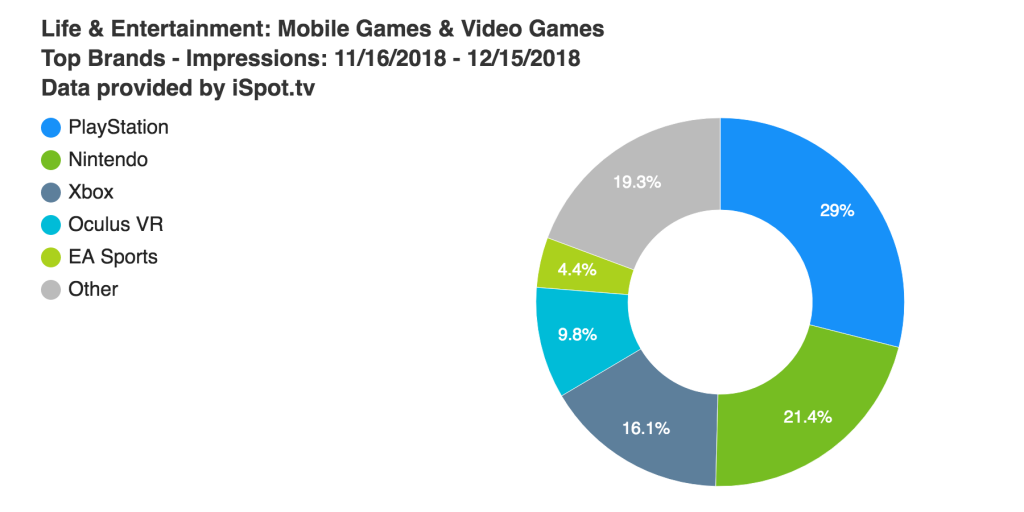 Below are the top five most-seen gaming industry TV advertisers from Nov. 16 through Dec. 15.

The holiday season is in full swing and gaming industry TV ad impressions are up once again, with nearly 5.4 billion from the previous period’s 4.5 billion. In total, 26 brands spent an estimated $101.6 million on 103 commercials that ran over 23,000 times.

Longtime chart-topper PlayStation maintained its lead with almost 1.6 billion impressions from 10 commercials that aired over 4,400 times. The most-seen spot was “Borderlands 2 VR: Maya” with over 330 million impressions. As you may expect, PlayStation seemed to prioritize reaching a male-skewing, sports-loving audience: top impression numbers came from networks including ESPN, Fox, and Adult Swim, and from programs such as the NFL, college football, and the NBA.

At No. 3 was Xbox with about 864.7 million TV impressions generated by five commercials that ran over 3,800 times. Its top spot was “Official Launch Trailer,” promoting Battlefield V, with 520.2 million impressions. Xbox received the most impressions from a sports-loving audience, with college football, the NFL, and SportsCenter as top programs while networks with high impression counts included ESPN, truTV, and Comedy Central.

Oculus VR joined the top five with 12 spots that aired over 900 times, resulting in 524.9 million impressions. The most-seen commercial with 112 million impressions was “See It in VR” featuring celebrities including Wiz Khalifa, Leslie Jones, and Awkwafina. Fox, ESPN, and Food Network were three of the networks that generated high impression numbers, while the NFL, Family Feud, and SportsCenter were some of the top programs.

EA Sports rounded out the ranking with 236.1 million impressions generated by five spots that ran over 400 times. With 154.2 million impressions, “Make Your Play Part 2” was the company’s most-seen ad. Impressions were primarily generated by networks such as ESPN, NFL Network, and ABC, and programs including the NFL, college football, and Monday Night Kickoff.