Sony made a big bet on God of War, putting a team of 300 people to work for years (and nearly five for the game’s creative director) on the PlayStation 4 exclusive. And it all seemed worth it when the game debuted to accolades in April 2018, and then won Game of the Year at The Game Awards in early December.

Cory Barlog wept tears of joy and relief on camera when he saw the review scores come in (it garnered a rating of 94 out of 100 on review aggregator Metacritic) as the game debuted. That was validation for a lot of work over the years in the re-imagining of what was an aging Sony video game franchise.

I caught up with Barlog recently, after enough time had passed the creative director at Sony Interactive Entertainment Santa Monica Studio could step back and talk about the process of making the game. The creative director was candid about the hard work, the self-doubt, and the restarts that happened on the project.

We talked about a lot of things. But this excerpt focuses on the process of making God of War.

Here’s an edited transcript of our interview. This is one of multiple excerpts we’re publishing. Here are links to excerpts on the ending, the alternate design paths, and Barlog’s advice for developers. 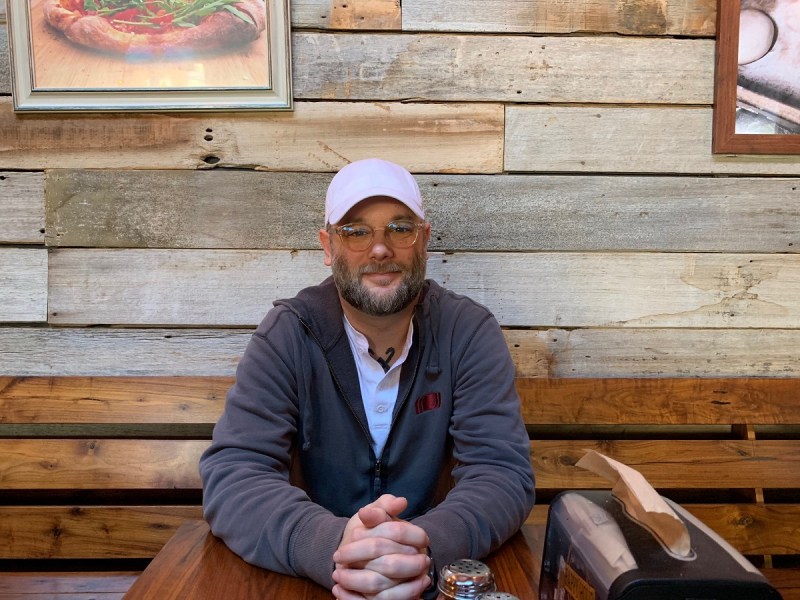 GamesBeat: I was a little confused about how much time you had on it. Five years, I’ve heard that in some interviews.

Cory Barlog: Five years is the total time from when I got back. I think it’s just two months shy of five years, when you consider the release date. I came back in June 2013. We released in April of 2018. But I was thinking about the game a little bit before that. I wonder if it was—my son is only six. I don’t know. Maybe I was saying that. But five years was the overall process. Yumi Yang, the producer on the game, likes to say four years, because she doesn’t count that first year. “You were just thinking in that first year. It doesn’t count.”

GamesBeat: I don’t think you ever fully described the circumstances there. You’ve been kind of vague about it. I don’t know if it’s super secret Sony stuff that was going on, but you left, came back, that whole process.

Barlog: That process was—I had done God of War, where I came on for the last two years, and it was a pretty intense last two years. Then immediately I had to jump into writing and directing the second game. I had about a week to a week-and-a-half break in between those two games. Then I finished 2, and I was immediately going into writing and designing the third game after about a week’s break.

I’d been going for years without a break and shipping these games. I was burned out. I wanted, creatively, to get a different experience. I’m not certain how well I knew this or not, but I felt like I didn’t know a lot that I needed to learn, and I wasn’t going to learn it if I was making the same game over and over again.

I think initially I said, “Can I just work with some of these other people while staying at Sony?” Sony said, “No, we don’t do that.” Which makes sense. You’re an employee. So I said, “All right, I need to go do a Caine from Kung Fu and wander the Earth, meet people and learn.” I learned way more during that process than I ever expected. Working with George Miller was an education. It was eight college degrees in character development and directing all at once. And then working with a bunch of other studios. I did a little stint with Lucas. With Crystal Dynamics I did the Tomb Raider stuff. That gave me the perspective I needed. I don’t think I would have been able to make this game had I not had that walkabout.

GamesBeat: That was rebooting as well.

Barlog: Tomb Raider, you mean? Yeah. They’d been working on it long before I got there. I came on to direct the second one, actually, but they brought me in really early and said, “We’re having trouble with cinematics. We need someone to come in and direct the cinematics and finish these things off.” I came on and did that.

That was really good for me, because it gave me a good understanding of, when they were rebooting, what was their process. I ended up using that—this isn’t to say they were wrong. It’s just that the way they approached it, I looked at it and thought, “I’d approach this very differently.” They had a specific goal in mind. But it helped me to see, OK, these are the things you would do if this was the goal. What if that wasn’t the goal? What if the goal was not to reboot, but to reimagine, to continue a timeline? Instead of going back and telling an origin, this is a continuation in the chronology of the story. How would you approach that differently so you don’t just wholly change everything, but figure out how to organically develop it? 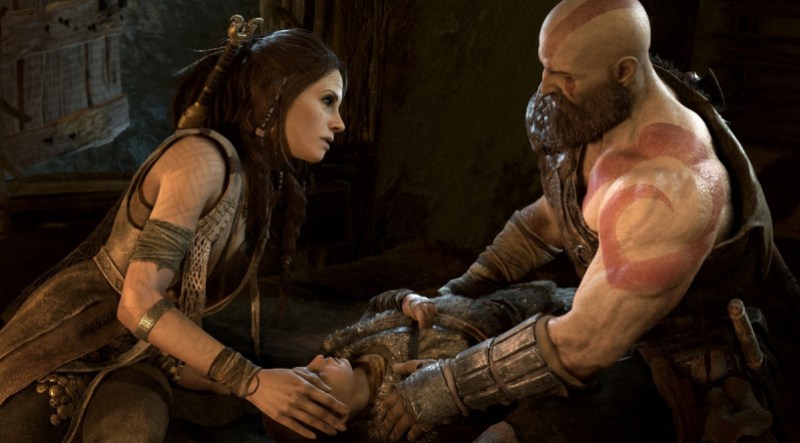 Above: Freya and Kratos with an ailing Atreus in God of War.

Barlog: The father-son came first and then the Norse myths came second. When I first started talking to Shannon, I think in maybe February of 2013, the idea was germinating. I didn’t verbalize it very eloquently. But when I got to the studio in June, I started talking to everybody about, all right—the first idea wasn’t that he was his biological son. We were going to have this kid there and you were never going to understand why he was even there.

As I started digging into the story, I thought, OK, there are a lot of neat ideas in here. Really cool ideas about who Kratos is, who we are—the real cementing of that concept was when I got back to the studio and saw that everybody was old, like me. We all were older. We were so thumb-our-nose-at-authority young when I started in 2003. Now, everybody had kids. Everybody was gray. We were all looking a lot more tired than we were before.

When we talked about things, we talked about them in a different way. We used to be a very combative group. Sometimes the combativeness was just to be combative. Now it was this more measured way of approaching problems. I felt like these developers that I’d come up with—we’d all been apart for years, and we came back together feeling like we’d changed in a very interesting way. It’s not that we were different people. We’d just aged.

I thought that was it. That plus having a son, what that changes, what you go through. This is what it is. Then it was like—people were not that into it. “I don’t get it. Why are we putting a kid in here? That’s weird.” Even Jason McDonald, the lead combat guy, he had said multiple times. “I have a kid. Thinking about going into these scenarios, I don’t want a kid around me. That’s dangerous.” It resonated with him, but in a weird, protective way.

GamesBeat: I don’t want to see my dad rip somebody’s head off either.

Barlog: Right. They all had interesting perspectives on it. But then I recall a meeting that I wasn’t in, where Eric Williams was working with a bunch of people. Everybody was sort of hemming and hawing a bit. I won’t say they were complaining, because it wasn’t negative. They were just expressing their concern. Why is Cory so stuck on this kid thing? And Eric turns around and says, “We’re putting a kid in the game. That’s what Cory wants. Move on. Let’s come up with some ideas.”

It was literally at that moment that everyone just shifted. Let’s figure out how to make this work. That, to me—I didn’t hear about it until after the fact. I was feeling like—wow, I don’t know what I did, but people have suddenly shifted their perspective. It was all because of somebody else. “Focus on getting to solutions instead of complaining about what you don’t like.”

GamesBeat: There was this basic sensible thing about it where—I was not a big fan of first three God of Wars. I was not a God of War person. But I could get into a father-son story. That’s more universally appealing. It lets you do that reboot and get that fresh start with a lot of people. Was that an argument for it? What made you stick to it?

Barlog: There’s a couple of things. There was this sense that—I was telling people that we’d never really had a character—or maybe we have and I’m wrong. Somebody on the internet will call me out on this. But we’ve never really had a character that you grew with. You play this character, and then 20 years later in your own life, you play this character again and they’re further in their life as well. You’re growing on a consistent arc with them. They’re changing. For me, I thought that was really interesting.