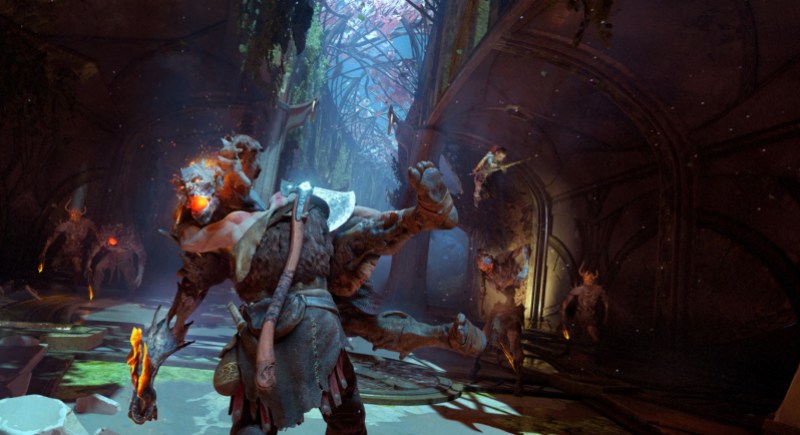 Above: Kratos still gets dirty in God of War.

GamesBeat: I did want to ask why the beginning turned out the way it did. I looked back on a lot of beginnings, and this one was very good. It has a lot of confusion and mystery. You don’t know what’s going on. Why is she dead? You start in the middle of things, like in the ninth year of the Trojan War. It seems at first like the best part of it was at the beginning, but you’re starting almost toward the end. Why did you start in the way you did?

Barlog: That was a very deliberate thing. It took a bit of selling to people. We never do the beginning of the game until the end, but I knew right at the start of the project that I had to start convincing people. We’re not going to start the game with a giant boss battle. Early discussions, I was already laying the groundwork. In the previous games we were all about that first 10 minutes with a big giant creature. It was great, but it was also really hard, by the time we got to God of War 3. You ended up in this arms race. “It’s big, but it’s not as big as that other one.” You’re always comparing it to the previous one and going thumbs up or thumbs down.

We couldn’t do that anymore. We had to throw that arms race out. We had to focus in on what’s interesting. I use the example of Buffy the Vampire Slayer, when they introduced Dawn as Buffy’s sister. They started the episode with the fact that everybody understood and accepted that Dawn was her sister, even though she’d never appeared in the show at all before. They just moved on. I think it was two episodes before they told you that it was a spell and it was all crazy and that’s why everyone was going along with it.

I thought that was really interesting. We’re going to start, and we’re not going to explain everything right away. We’re going to give you really powerful moments that feel important, but you don’t understand why. That way you’ll look back and they’ll have even more weight. But we want you to feel like you’re participating in the tail end of everything, and have this sense of what happened.

The first time I pitched Shuhei Yoshida, the president of Sony’s worldwide studios, on the game, I couldn’t get a minute-and-a-half into my pitch before he said, “Who’s the mother? What’s her name? Where is she from? Is she going to appear in the game? What does she look like?”

GamesBeat: You had your own son. I wonder how much you see your relationship with him in this game.

Barlog: So much. There’s so much of this—the way that Kratos views godhood, as a disease he’s passed on to his kid, is the same concept I look at my kid, with my own psychological idiosyncrasies, my own obsessive-compulsive nature. He’s exhibiting all of that. I gave him that, because my wife is not that way. My wife has anxiety, but she’s nowhere near that—everything has to be done in a certain order, and my kid is that times 1,000, which is so heartbreaking. It’s the same way that–in that moment when Atreus rages out at the end of the game and knocks himself out and nearly dies. It’s seeing that terrible part of yourself in your kid.

There were some things we put in and it didn’t work out. People would say, “I don’t get that at all.” All right, we’ll take that out.

GamesBeat: This is an aside, but when Hellblade came out, did you have any thoughts on their take on Norse mythology?

Barlog: I followed Hellblade through their developer diaries from the beginning. One, because I like Ninja Theory. I think they’re a great group of developers. And then two, because they were into Norse myth, and I’m the most paranoid person ever, always worrying that everybody else is going to use the same ideas that we are.

There was a number of times where I’d come out of my office slamming the door and screaming and going, “Who’s talking to Ninja Theory?” Because they’d be doing something exactly the same way we were. It would happen over and over again. The reality is we’re working in the same mythology, so there are certain things you’ll end up coupling up on. But when they said that they were going to do a single camera shot, I was like, “Seriously? They’re going to be release before us doing the single camera shot thing?” 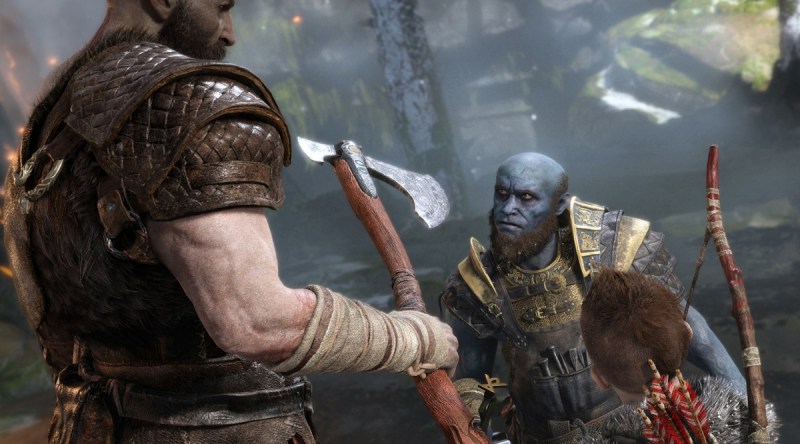 Above: Brok, the blue dwarf, provides comic relief in God of War.

GamesBeat: I didn’t quite grasp the significance of the single camera. Why is it such a big deal? Why was it important to you?

Barlog: I’d worked with a lot of film people. The language of film is cuts. It’s lenses and position and composition and movement, coupled together in a linear format of close-up, medium shot, two-shot, close-up, crane. This is how they speak. We’ve aped that because we love movies, because we’re appreciators of the work that they do. We continue on with that.

But the idea of doing something that embraces video games, which is—the player is in control of the camera, right? Let’s give the player total control, so that when they’re experiencing this, they experience it the way we would experience it in the real world. When I go see the Grand Canyon, I don’t have a crane that accompanies me to give me this awesome distance shot of the Grand Canyon. I stand on the Grand Canyon and look at it. It’s just as amazing. I don’t need this crane shot to make it amazing.

Also, there’s this sense of immediacy that you get from never cutting away, never looking away, and feeling, almost subconsciously, that you have experienced this extremely intimate, personal portrayal. I knew the story needed to be intimate. I wanted no cinematics, no camera cuts. That’s the first thing I said. We’re not doing any cuts and you won’t ever lose control of the camera. You can walk around, and walk away, while people are talking, which freaked people out and rightfully so. We needed to figure out a camera thing before we could do all of that stuff together. So it gave us a bit more freedom to have the camera move in certain motivated instances, but we would never cut away.

Never cutting away means never looking away, to force you to experience these moments, whether they’re uncomfortable or not. You have to be there, and it has to feel personal to Kratos. To me, these were—the difficulty of grasping it is what people experienced the whole time. “I don’t get why this is going to be good.” Whether they would say that you can’t do drama—you can’t have action and drama without camera cuts. You need cuts to give people a break. I said, “No, you don’t. You don’t need that stuff.” You can make it feel like you start the game and you never look away, so it feels like you lived this life with him. You experience these moments as Kratos.

It’s one of these things where—we were making the earlier games, God of War and God of War 2. We had a camera designer who was being interviewed about working on the game. I think he had said, “I work on cameras here. Pretty much, if I do my job right, you have no idea that I do my job.” That was the end result with the camera. You don’t know why, but it feels more personal. That element, you may not be able to piece it together, but that element adds to it. That’s a critical, linchpin element of the personal nature of the game, even if you can’t say why.

It was hard to convince people with just a three-minute snippet of gameplay. When the game was finished I had a bunch of people come into my office and say, “I get it now,” after they finished the whole thing. After just playing an hour of the game or whatever, it didn’t make sense. But when you get all the way to the end—they were playing the 40 hours in two or three days. They were doing a hardcore push. It was more resonant, I think, than when you spread it out over weeks.

For me it was, perhaps, one of those battles that feels like it’s not—there’s no point. Why are you fighting for this? But I had the gut feeling. I just felt this was going to make a huge difference. 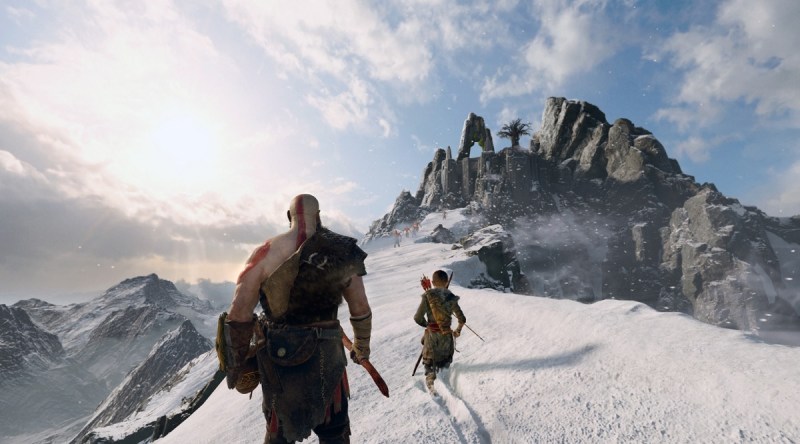 Above: Approaching the mountaintop in God of War.

GamesBeat: It’s been interesting to have this contrast this year with games that were on a fixed timeline, like Call of Duty. You can’t go longer than so many years because you won’t have a Call of Duty one year. Assassin’s Creed tried to stay on that for a while as well, have that one game come out every single year. But then you guys are out of that cycle. You were on a five-year cycle. Red Dead was seven or eight. You had this freedom to go forward and back and forward again. But it’s hard to argue that everything should be this way.

Barlog: The interesting thing, the thing that I think is a stark contrast to film—in film they announce the release date when they sign the deal with the director. You’re doing a Star Wars movie and it’s coming out in two years at Christmas. You know your release data and you have to hit that, all or nothing. Whereas in games, the best games come out when it’s done. I think we should never have parity with movies in that respect. We should always maintain that.

It’s way more complicated. Games that are rushed, that attempt to meet a deadline that’s arbitrarily set early on, everyone suffers from that. The only time that you get the benefit is when someone says, “Hey, we’ll sit on this for a year, so how about you have a small group of people tune it and make it better?” That, I think, is really good. But the bar has just been raised this year, by everyone. It honestly scares me, developing games in the future. How much higher can we raise the bar?

Everybody’s game I play, I’m just like—I have so much work to do. I can feel the fact that everyone is operating on this level that is so far beyond just last year alone. What will games look like in 2020? I don’t even know.