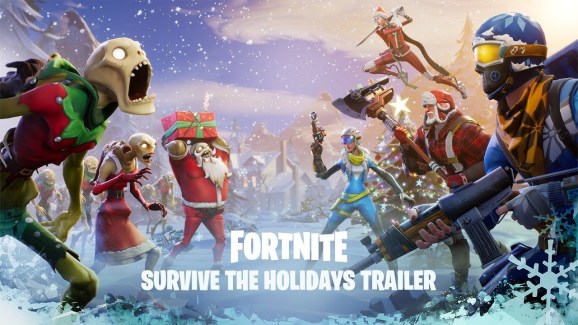 Fortnite was an unstoppable force in 2018. And throughout the year, the only game you could really compare it to was itself. While the battle royale shooter was making tons of money each and every month, it did see a peak in July — at least on iOS. But that all changed in December when the game generated $69 million in revenue on Apple’s mobile operating system alone, according to intelligence firm Sensor Tower.

December was Fortnite’s biggest month on iOS ever. In terms of revenue, it was up 83 percent over November and up 16 percent over the previous top month of July.

“All told, the game grossed more than $455 million during 2018 on Apple’s App Store,” Sensor Tower founder Oliver Yeh wrote in a blog post. “[That’s] on top of the revenue it took in on Android after its publisher opted to make an end run around Google Play. On average, players spent about $1.6 million per day in the game between launch and December 31.”

Fortnite’s battle royale competitor PUBG Mobile, however, generated nearly $100 million in revenue in total last year. That was less than a quarter of what Fortnite made — although it’s worth pointing out that PUBG Mobile does not have a license to generate money in China where it is extremely popular. That country recently began approving games licenses again after a freeze that started in March, so PUBG Mobile may finally get the right to charge Chinese players

But back to Fortnite, the game also dominated with its player acquisition in December as well.

Simply having a wonderful Fortnite time

In August, the analysts at SuperData Research predicted that Fortnite’s revenue had peaked. SuperData was beginning to see a downward trend in its estimations for Fortnite’s performance. At that time, I wrote an explanation for why Fortnite’s peak was yet to come.

You see, Christmas exists. And that gift-giving holiday is one of the biggest days of the year for free-to-play games — especially on mobile. People get new smartphones, tablets, and consoles for Christmas, and they almost always search for new games to play.

On top of that, developers typically plan holiday events to capitalize on that influx of new and returning players. In August, I predicted Epic Games, which has set a new bar for in-game events, would have its own Christmas-themed in-game celebration.

And, of course, I was right. Epic announced its Survive the Holidays event at The Game Awards in early December.

And yeah — that seems to have given the game a slight boost.

“In December, Fortnite took in $44.3 million from the U.S. App Store, which is the most ever grossed in a single month by a game,” Sensor Tower analyst Randy Nelson told GamesBeat. “It surpassed Pokémon Go’s $42.9 million grossed during its launch month of July 2016, which was the previous best single month ever for a game on the U.S. App Store.”

Of course, we don’t know how the game performed on Android, consoles, or PC — but I’d bet it did pretty well on everything.