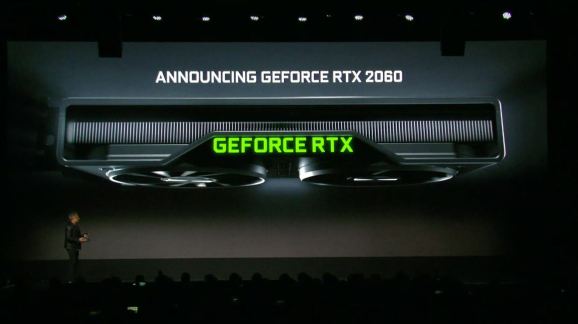 Nvidia revealed the latest product in its new RTX line of video cards. The GeForce RTX 2060 is $350 and begins shipping January 15. It is a mainstream card that is much more affordable than the RTX 2070, which sells for $500. Most notable about the RTX 2060, however, is that it is Nvidia’s most compelling reason to upgrade to RTX so far.

At the Consumer Electronics Show in Las Vegas on Sunday, Nvidia boss Jensen Huang introduced the RTX 2060. He spent much of the hour leading up to that reveal once again making the argument for ray tracing, which is the next-gen lighting tech that the company sees as the future of 3D rendering. But unlike with the RTX 2080 Ti and RTX 2080 reveal, this time Huang dug into the details about performance.

The best bang-for-your-buck RTX card yet

At $350, the RTX 2060 maintains Nvidia’s trend of bumping up the price for its GPU categories. The GTX 1060 launched at $250. Nvidia’s public reasoning for this price and name reshuffling is that RTX cards are capable of ray tracing and other new tricks that go beyond running the same old games 25 percent faster.

But that RTX reasoning goes down a lot better with the 2060 than something like the 2080. Only a tiny number of games support RTX features, so the 2080’s moderate speed improvements are much more noticeable. But the 2060 is the fastest $350 GPU you can get.

It is a bit faster than a $400 GeForce GTX 1070 Ti, according to Nvidia. And the benchmarks that are rolling out today seem to back that up (we haven’t had hands-on time with it yet) — although average framerate varies a lot depending on the game.

The 2060 isn’t a generational leap in speed that Nvidia experienced with the GTX 1060 over the GTX 960. But that’s where all of those RTX features come in. This card is ready for the future in a way that no GTX card is.

The 2060 is a good deal at $350. That price for 1070 Ti-tier performance should be enough to convince most people. But the thing about this GPU is that it is better at running newer releases. You get a bigger leap over the GTX 1070 in 2018’s Shadow of the Tomb Raider than you do in 2015’s Rise of the Tomb Raider.

Nvidia has tuned the RTX generation of hardware to take advantage of new technologies and optimizations. And developers are seeing that benefit without having to do a lot to specifically modify their 2018 games for the RTX 2060.

And the RTX 2060’s strong capability with newer games is only going to get better as studios begin adopting some of the RTX features.

During his presentation at CES, Huang showed the performance of the RTX 2060 running ray tracing in Battlefield V. He acknowledged that the computationally intensive tech causes a drop in framerates. But they also ran the entire live demo onstage on an RTX 2060 to prove how well it works.

But he also noted that the company has done the work to improve ray-tracing performance. And they are doing that with another RTX feature: deep-learning super sampling (DLSS).

DLSS is a process where Nvidia’s computers look at a perfect version of a game running at a hyper resolution. The DLSS then fixes imperfect frames running on an RTX card to make it look more like the perfect version — but it does so at a fraction of the computational budget.

With DLSS, Nvidia claims that you get nearly identical performance with RTX on or off. This also confirmed that DLSS is coming to Battlefield V and EA’s upcoming action role-playing adventure Anthem.

The other big feature that ensures the 2060 is ready for the future is variable-rate shading. This is a technique where developers can tell the GPU to render different parts of the same frame or scene at different resolutions.

The idea is to spend less computational power on shadowy or fast-moving objects. You won’t miss the detail in those things because you wouldn’t have noticed it in the first place.

Machine Games has already added this feature to Machine Games’ shooter Wolfenstein 2: The New Colossus, and that game runs almost twice as fast on RTX 2060 compared to a GTX 1060.

Buy the best and newest you can afford

Human beings always want to get a deal. We all love the idea of feeling like we saved money by getting one over on a merchant. I think for that reason, a lot of people are going to convince themselves to get something like a GTX 1070. Because if Nvidia wants us to buy the 2060, we could probably get a deal by buying something else, right?

But if you are building or upgrading a PC, you should always buy the best and newest GPU that you can afford. That’s especially true now. The RTX cards include technologies that even the most recent generation GTX and AMD cards do not have. And while you probably still shouldn’t buy a GPU for ray tracing, you probably should get one for DLSS and variable-rate shading.