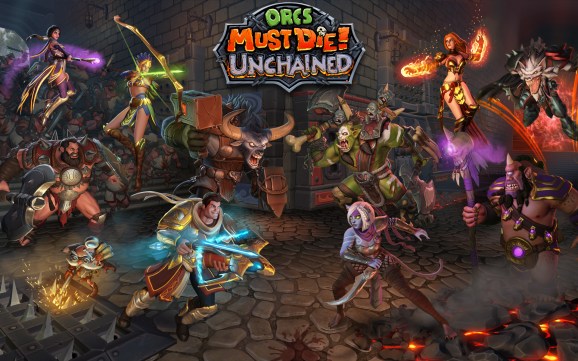 Art from Orcs Must Die: Unchained.

Developer Robot Entertainment announced today that is shutting down the servers for three of its games. On April 8, the company will shutter Orcs Must Die: Unchained, Hero Academy, and Hero Academy 2.

Orcs Must Die: Unchained was the online multiplayer entry in the action strategy series. Hero Academy and its sequel are turn-based tactics games. You will not have access to all three after the servers go down, and Robot plans to delete all of its player data in compliance with the GDPR.

All three of these games are operating at a net loss for Robot, according to a blog post by chief executive officer Patrick Hudson. The studio wants to shift resources away from some of these older releases to focus on making something new. At the same time, the Robot team recognizes that this is disappointing for some fans.

“Making and supporting a game is a long and challenging journey,” reads Hudson’s blog. “Along the way, there are plenty of highs and plenty of lows. The communities who play our games join us on these journeys. We know this decision affects our players as much as it does us. … But we must shift our focus to future games and make our investments there.”

Robot did announce that it is working on two new games that it hopes to reveal in 2019. But it did not share any specifics. It did, however, promise to award Unchained and Hero Academy players with bonus in-game currency. It wants to ensure that anyone still showing up to play these games have a delightful experience before they potentially go away forever.

Why games shut down

Games were once products, but that isn’t the case anymore. Many are now services, and that includes the three games that Robot is shutting down. As a service, developers hope to maintain games for long periods of time in an effort to attract players (and spending) that stick around for months or even years.

But live-service games all face challenges, and Robot Entertainment’s trio of closures illustrate those difficulties.

For Orcs Must Die: Unchained and Hero Academy 2, the issue came down to popularity.

“Orcs Must Die: Unchained and Hero Academy 2 have been unable to maintain a sufficient player base to cover the operational costs to keep the games running,” Hudson wrote.

Put simply: If you don’t have enough people, they won’t spend enough money, and the games can’t pay for themselves let alone generate a profit.

Hero Academy, meanwhile, suffered from trying to run a long-term service on a constantly changing platform like a mobile operating system. Every time Apple updates iOS, developers have to update their games to ensure they run on the latest hardware. Those updates introduce specialized costs that don’t include maintaining a server and content updates.

“The original Hero Academy has been technically obsolete for a long time now,” said Hudson. “We could not maintain the pace of operating system updates from Apple. It was actually removed from the App Store in early 2018.”

This is a reminder that running a game-as-a-service is not a magic bullet to success — and that these games are especially transient. But at the same time, I would expect Robot’s next game to run as a live service as well.