Intel and Warner Bros. demoed a Batman entertainment experience aimed at passengers in a concept for a self-driving car. It is meant to show how we could entertain ourselves in the cars of the future.

It’s based on Intel’s concept of a “passenger economy,” which assumes that we’ll have a lot more time on our hands in self-driving cars and will need to find a way to entertain ourselves. The company showed off the technology in its booth at CES 2019, the big tech trade show in Las Vegas this week. Intel and researcher Strategy Analytics estimate the passenger economy could have a $7 trillion economic impact by 2050.

The car transports guests to Gotham City, home to DC superhero Batman. Through a virtual ride and 270-degree entertainment, the vehicle delivers on a commitment the two companies made at the LA Auto Show in November 2017 to explore the potential of next-generation entertainment in future autonomous vehicles. This experience will take place in the back seat of a car — in maybe a decade or two, where we are no longer worried about having a human driver.

“It demonstrates potential for an immersive entertainment experience in an autonomous vehicle,” said Marcie Miller, automotive strategic marketing at Intel, in an interview with GamesBeat. “It’s going to show how Intel’s safety model works, so the passenger doesn’t have to worry about what the vehicle is doing.”

It’s targeted for the passengers in a car that resembles one like those we drive today. Except it will be a self-driving car, suggesting the real thing won’t happen for a while yet. It’s based on a ride-hailing service.

The interior of the Intel Warner Bros. autonomous vehicle, a retrofitted 2019 BMW X5, is equipped with advanced technology, a large screen TV, projectors, mobile devices, sensory and haptic feedback, and immersive audio and lights to bring passengers on a virtual ride moderated by Batman’s trusted butler, Alfred Pennyworth. Gotham City’s imagery comes in via the side windows, and Alfred’s voice greets you.

“AR becomes the centerpiece in the self-driving car of the future,” said Tim Bajarin, analyst at Creative Strategies International. “If you aren’t driving, what are you doing? Twiddling your thumbs?”

In the Warner Bros. experience, you see a comic book on the screens, or windows of the car. You get haptic feedback to make you feel like you are in the moment, Miller said. Batman fights a bad guy on top of the vehicle at some point.

“There’s no blueprint for this kind of entertainment,” said Justin Herz, executive vice president of digital product, platform and strategy for Warner Bros., in an interview with GamesBeat. “The big driver for us is to explore what kinds of experiences could happen while taking into account real world notions like safety and security.” 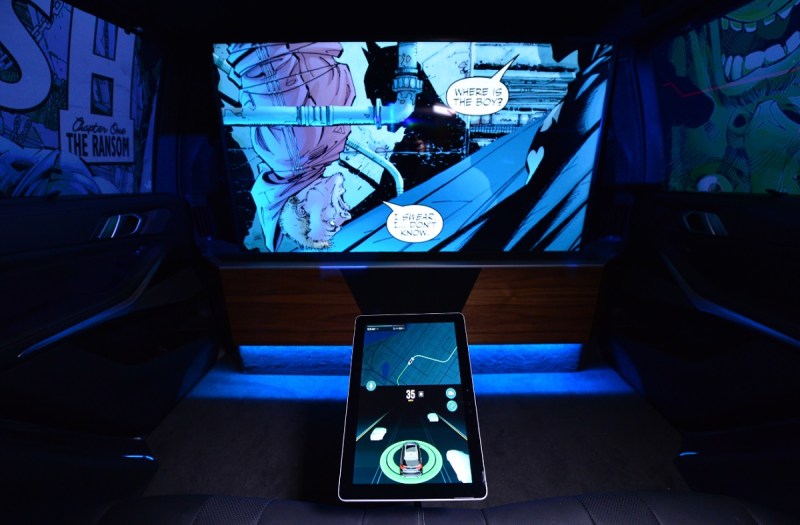 Above: Intel and Warner Bros. are figuring out car entertainment of the future.

Upon entering the vehicle, guests experience the future of in-cabin entertainment while becoming familiar with safety measures in place through five “chapters”:

Chapter 1: Welcome to the future of in-car entertainment

Once passengers settle into the vehicle, the cabin is illuminated and Gotham City appears on the windows. Alfred delivers a welcome message and passengers begin their ride as Gotham City moves by on side windows.

Guests are treated to new immersive entertainment content as they engage with a comic book reader that’s presented and narrated across the cabin. After experiencing Batman and Killer Croc interactions from around the vehicle, Alfred alerts guests to a road closure ahead. The interactions demonstrate how passengers may be notified of important route changes when their eyes and ears are off the road.

A car may cut in or a pedestrian may cross the street. Responsibility-Sensitive Safety (RSS) is Intel’s framework for helping autonomous vehicles operate in a more safe and trustworthy manner. RSS formalizes the human notions of safe driving into mathematical equations, helping provide verifiable safety assurance for autonomous vehicle decision-making. Within the cabin, Alfred and a dedicated RSS screen illustrate for guests how RSS helps keep a 360-degree safety monitoring zone around a vehicle.

Chapter 4: Previewing movies in the car of tomorrow

Intel and Warner Bros. demonstrate how passengers might decide on what movie to see next from the back seat of a car. Guests are provided an immersive entertainment experience with a trailer for Warner Bros.’ Aquaman, adapted for in-car 270-degree viewing by ScreenX. Guests are also shown how they might identify nearby theaters and purchase movie tickets from inside the car.

Without a driver, autonomous vehicles will need to inform passengers of important information about their trip, such as where they have arrived and how to exit. In this final chapter, Alfred tells passengers they are arriving and instructs them how to safely depart.

Intel predicts the coming “passenger economy” will free more than 250 million hours of commuting time per year in the most congested cities in the world. What’s more, Intel predicts a total addressable market of $200 billion from rising consumer use of new in-vehicle applications and content.

Intel and Warner Bros. are experimenting with technology to explore how consumers interact with new forms of entertainment within vehicles once they are uncoupled from the steering wheel.

By transforming the cabin and the back windshield into an immersive entertainment platform, the companies are scratching the surface of the possibilities that will come with the future Passenger Economy. The car includes interactive communications to keep riders informed and comfortable, while also demonstrating in real-time how Intel’s RSS model can help keep them safe.

Both companies believe consumer trust is critical for advancing autonomous vehicles. In order to create trust, autonomous vehicles must address a core set of interactions that engender confidence, control and a sense of safety. Intel is already helping address public trust by offering RSS to the broader automotive industry as a safety standard starting point. The Intel-Warner Bros. concept car demonstrates how content that is entertaining and informative has the power to help build trust while keeping passengers engaged.

Intel and Warner Bros. have been working on the technology since early 2017. Herz said it is likely a 5G connection will be necessary to pipe the entertainment into a car wirelessly. That means bringing additional technology into the car. Herz’s group is a central technology center that works with the film and game studios at Warner Bros., as well as DC.

“We have to understand what consumers want and how to bring that to them,” he said. “This is very early days. It’s great to experiment. It’s not a game, but it has an element of gaming built into it. It’s like you are immersed in Arkham.”