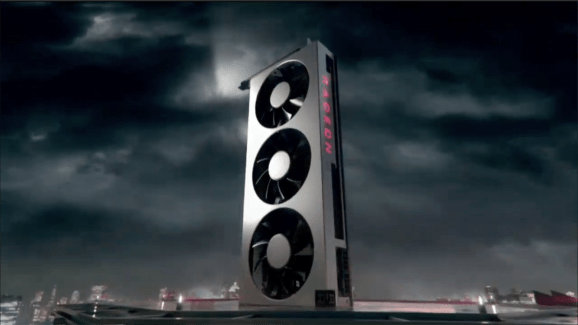 AMD announced its new Radeon VII video card today. It’s a $700 GPU that may have similar performance to Nvidia’s RTX 2080, which ranges in price from $700 to $800. This finally makes AMD competitive with Nvidia again on the high-end (if you ignore that $1,200 RTX 2080 Ti). But the Radeon VII may actually help Nvidia make its case about the future of 3D graphics.

From about 2006 to 2016, graphics-hardware engineers strived to meet the rendering demands of developers. The goal was to run 1080p games at 60 frames per second. That struggle came to an end about three years ago when AMD and Nvidia both launched $250 GPUs that can almost any new release at 1080p60.

Modern CPUs and GPUs are so powerful and fast that they’ve essentially conquered 1080p. Developers have so much headroom at this resolution that they are unlikely to need anything more than a $300 GPU.

If we’ve conquered 1080p60, then why do we need more powerful video cards? Well, even if rendering budgets are going to stay within the confines of a Radeon RX 480, display technologies are continuing to progress.

The problem for AMD is that 1440p isn’t going to require an astronomical leap in power. And while more speed is great, it’s maybe time to start asking what else a new generation of graphics hardware can do beyond run the same kinds of games 25 to 30 percent faster than before.

The need for more than speed

Since introducing its Turing generation of RTX graphics cards, Nvidia has tried to shift the conversation away from speed. The company has spent the last several generations focusing on power, but now it is talking about new technologies like ray tracing, deep learning, and variable-rate shading.

Meanwhile, AMD’s approach is a stark contrast that feels like the company is missing an opportunity.

And to be clear, I think now is an obvious opportunity to do more than speed.

Yes, running games at 1440p144 and 4K is awesome, but it’s not something most people need. Again, 1440p monitors make up under 5 percent even if you include ultrawide 1440p displays. And 4K? It only has a 1.42 percent market share on Steam, and that fell 0.03 percent in December.

This doesn’t mean that 1440p isn’t growing. It is. It’s the only resolution category above 768p besides “other” that saw a month-over-month increase in December. But it’s going to take years to fulfill its destiny as the new display standard.

The most popular games are highly optimized

Even for people who have a 1440p-or-higher display, the Radeon VII is in a bit of a tough spot when it comes to price. For 1440p, you can get by with a more affordable RTX 2070 at $500. That’s especially true because the games that benefit most from super high framerates are typically better optimized with fewer visual effects. You don’t need an RTX 2080 or Radeon VII for Rainbow Six: Siege, Overwatch, or Counter-Strike, for example.

I’m not trying to claim that Radeon VII isn’t going to have a great bang-for-the-bunch. I bet it will.

Can’t we do more?

Faster video cards are not that exciting. It’s great that AMD is creating some competition for Nvidia. I am hopeful that Radeon VII will drive prices down for RTX cards. But that’s about it.

The point is that at current render budgets, faster GPUs are going to get noticeably diminishing returns. Speed just doesn’t matter as much. And if you are making a GPU in this moment in time, why wouldn’t you take this opportunity to do something bold and new?

Well, Nvidia is making that attempt. Real-time ray tracing is a potentially massive leap forward for visuals and development. The tech renders light closer to the way it works in the physical world, and the results are stunning. Other RTX tech is increasing game performance in creative ways that involve specialized compute cores. It is looking beyond the horsepower race.

AMD, however, is not. At least, not yet. Radeon VII does not have variable-rate shading that enables games to render the same frame at different resolutions. It does not have an equivalent to deep-learning super sampling that can reconstruct a frame more efficiently than traditional methods. And it does not have ray tracing.

Now, maybe AMD is betting that Nvidia is wrong and those technologies won’t matter. That’s completely fair. No one knows yet if they will (OK — variable-rate shading is probably going to matter). But this isn’t about which company is correct in the end.

It’s about Nvidia’s approach making more sense right now. Nvidia’s argument is that it’s time to try a bold leap forward while we are in something of a graphical plateau. And the Radeon VII is evidence of that.