The Switch already has an awesome library in less than two years after its debut, but it is missing a key Nintendo offering: a 2D Mario game. New Super Mario Bros. U Deluxe fixes this, even if it’s a port of Wii U game from 2012.

But it isn’t a straight port. This Deluxe version contains both the original and the New Super Luigi Bros. U expansion, and it also adds Toadette as a player character. Is that enough to make New Super Mario Bros. U worth buying again when this Switch version comes out on January 11? And what if you haven’t played it before? Is it worth jumping into now?

Maybe. This Deluxe version has the same ups-and-downs as the original. But if you really have an itch for a 2D Mario game … well, you should play Super Mario Bros. 3. But if you absolutely must have something a bit more new — whether you played the Wii U version already or not — then you’ll have plenty of fun with New Super Mario Bros. U Deluxe.

Mario games are fun! Jumping on Koopas, hitting blocks, and all that stuff has been entertaining since Super Mario Bros. came out in 1985. Nintendo figured out how to make 2D platforming feel right decades ago. 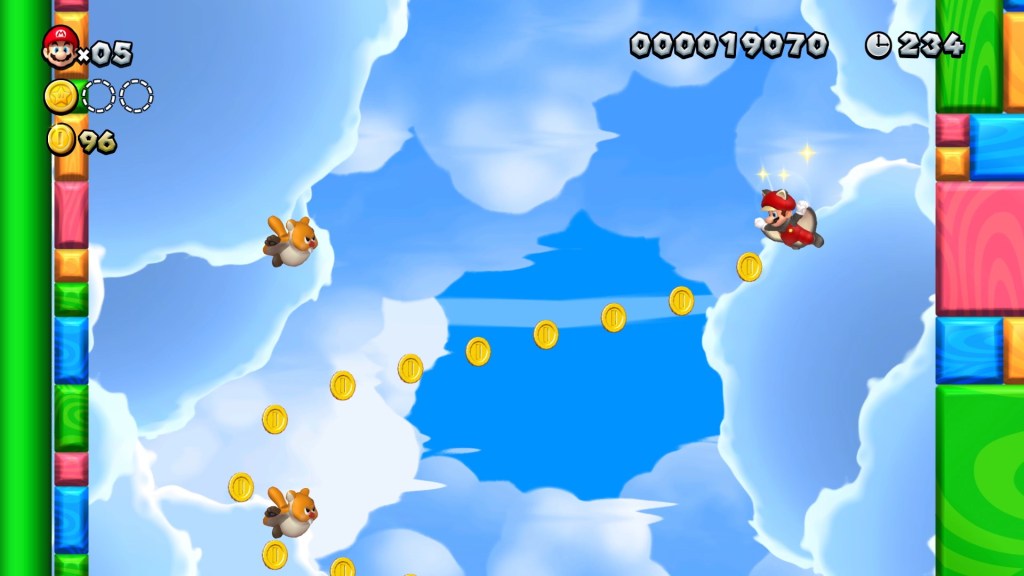 Above: Flying Squirrel Mario is a variant on the usual flying Mario power.

Along with the original version of New Super Mario Bros. U, you also get the New Super Luigi Bros. expansion. While it has the same overworld as the original, the Luigi variant has different levels. Having both of these in the same game gives you an adventure that feels twice as long as a typical 2D Mario game.

The Luigi levels are also a bit more difficult, which is nice if you’re more of a Mario veteran or just like more of a challenge. New Super Mario Bros. U Deluxe has a lot of options and characters that make it friendly to younger and less experienced players, but the base game can also feel easy to someone like me who has been playing these for decades. That’s why it’s nice to see New Super Luigi Bros. U amp up the challenge.

Toadette is a new player character, and she’s the Deluxe edition’s most notable addition. She’s designed for beginners, as she’s easier to control and you earn extra 1ups while you play as her.

But even if you’re not looking for an easier experience, it’s still fun to play as Toadette, especially if you’re already beaten this game on the Wii U. It’s relaxing to go through again as this cute heroine. 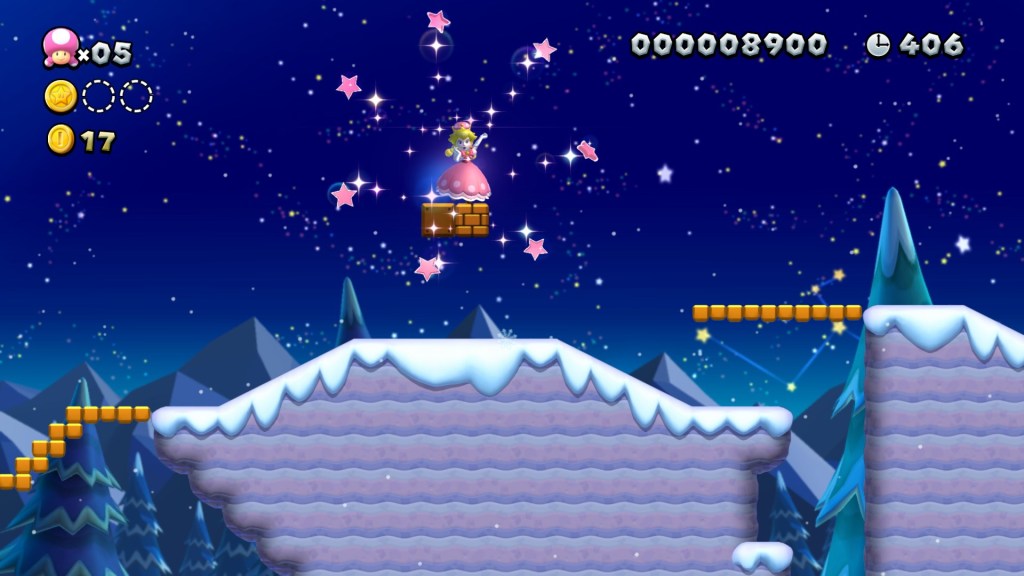 Above: Toadette is a fun addition.

A lack of originality

When the original came out, it was the fourth entry in the New Super Mario Bros. series. At first, the point was to be a kind of callback to a kind of Mario game Nintendo hadn’t made in years. But after getting four of them, they began to feel bland.

Even features such as four-player cooperative play had been done before, and that experience just isn’t for me. On top of the usual platforming, I must also worry about not getting in the way of other players. 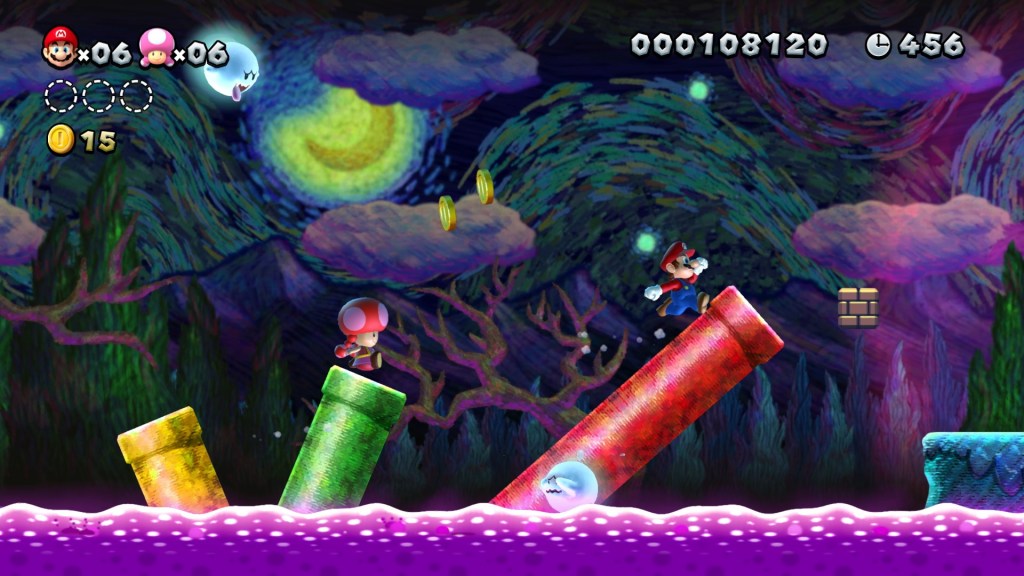 Above: One of the few times New Super Mario Bros. U Deluxe does something interesting with art.

The bland visuals and music are part of the problem. It all just looks like Mario. Any new interesting visual hooks are rare. When they do happen, like the Vincent van Gogh-style visuals in the level above, it stands out.

And the music is more grating than anything else. All those “waa waa” noises become irritating (even if it is cute to see all of the enemies sometimes dance along with the song).

New Super Mario Bros. U Deluxe is a fun 2D Mario experience, but it doesn’t stick with you the same way the franchise’s classics do. If you crave a Mario side-scroller, it’ll certainly do. And you’ll have more game here to play than usual thanks to the addition of New Super Luigi Bros. U. It’s also nice to see options that appeal to hardcore and casual fans.

I’d just rather see something more daring. And I’m not even knocking the port. This is definitely its best version thanks to the addition of Toadette. But New Super Mario Bros. U lacks imagination, and bringing it to the Switch doesn’t solve that problem.

New Super Mario Bros. U Deluxe comes out for Switch on January 11. Nintendo gave us a copy for this review.