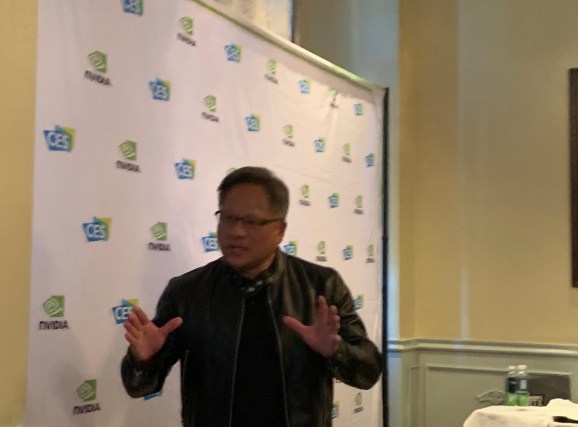 Huang was not impressed.

“It was kind of underwhelming,” he said in the press Q&A.

Huang said the performance of AMD’s Ryzen VII was weak compared to the performance of Nvidia’s GeForce RTX 2060, unveiled on Sunday night. He noted 40 gaming laptops are coming based on Nvidia’s 2060, 2080, and Max-Q technology this year. Regarding AMD, he said the Ryzen VII didn’t have real-time ray tracing or another feature dubbed DLSS (deep learning super sampling), which can sharpen and speed frame rates.

“I think they just thought of it this morning,” he joked.

I asked Huang if he was disappointed in the numbers of games that support Nvidia’s latest graphics features, like real-time ray tracing and DLSS. He said, “Every generation starts at zero.” He said more support was coming ahead for real-time ray tracing (which delivers some very cool reflection, lighting, and shadow effects), and DLSS in the future.