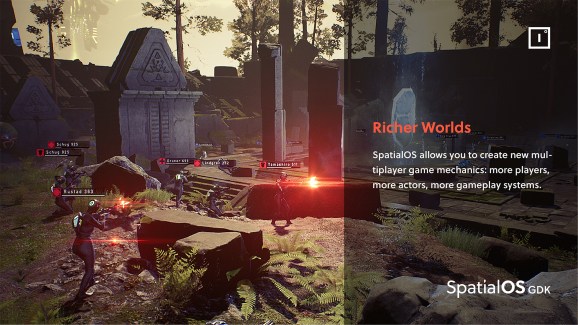 Unity found itself at the center of a controversy today, and now competitor Epic Games is turning up the heat. Unity is cutting off future support for the online-multiplayer development platform SpatialOS from accessing its game-development toolkit. Improbable, the owner and operator of SpatialOS, posted a blog about this corporate spat and claimed this move threatens developers. In response, Unreal company Epic and Improbable revealed a $25 million fund for Unity devs. The companies plan to grant that cash to studios that leave Unity for other tools.

“To assist developers who are left in limbo by the new engine and service incompatibilities that were introduced today, Epic Games and Improbable are together establishing a $25 million combined fund to help developers transition to more open engines, services, and ecosystems,” Sweeney and Narula wrote. “This funding will come from a variety of sources including Unreal Dev Grants, Improbable developer assistance funds, and Epic Games store funding.”

Unity and Unreal are direct competitors. A significant number of indie developers use one or the other to make their games. And if a studio uses those engines they have to pay licensing fees or a share of revenue.

Epic is taking this opportunity to highlight one of the differences between itself and Unity. Unreal is slightly more open. And the company is using its Fortnite-fortified bank account to win over some converts.

At the same time, Unity is defending itself. And it is saying that Improbable (and now Epic) are mischaracterizing the threat to developers.

Unity devs are not in legal limbo

In their blog, Epic and Improbable claim that Unity developers could face legal consequences if their game runs SpatialOS.

“Recent changes by Unity to their terms of service have raised concerns among developers about their future ability to choose freely among engines, middleware SDKs, stores, and cloud service providers,” Sweeney and Narual wrote. “Worse, it has left some live and in-development games in legal limbo.”

But Unity has already dismissed the claim that it is putting any developer into legal limbo.

“Projects that are currently in production or live using SpatialOS are not affected by any actions we have taken with Improbable,” Unity tech chief Joachim Ante wrote in a blog post. “We have never communicated to any game developer that they should stop operating a game that runs using Improbable as a service.”

Instead, Unity has only revoked Improbable’s access to Unity. This would prevent new games from using the service. But it should not affect anyone already running Unity and SpatialOS together.

Unity: This was not a surprise to Improbable

Unity Technologies also noted that its fallout with SpatialOS was not due to a sudden terms-of-service change.

“More than a year ago, we told Improbable in person that they were in violation of our Terms of Service or EULA,” Ante wrote. “Six months ago, we informed Improbable about the violation in writing. Recent actions did not come as a surprise to Improbable; in fact, they’ve known about this for many months.”

Unity admits that it has updated its terms of service, but it claims it only so to clarify its wording.

“At the core, the Streaming and Cloud Gaming Restrictions terms are still the same as before,” said Ante. “If you want to run your Unity-based game-server on your own servers — or a cloud provider that provides you instances to run your own server for your game — you are covered by our EULA. We will support you as long as the server is running on a Unity supported platform.”

Ante points out that you can run a Unity game on Amazon Web Services or something similar. But Unity Technologies is cutting off platforms that add their own development tools on top of Unity unless those platforms are an official partner with the company.

That creates a mess of other problems for developers, of course. This means they either have to do their multiplayer services themselves or work with an approved partner. And Unity’s current list of authorized platforms is small: Genvid, Hatch, Mixer, and PlayStation Now.

And Epic is making the case that if you go with Unreal, you don’t have to worry about who Epic has made deals with. Those partnerships are for you to make.