The Minecraft Team at Microsoft has built a burgeoning Marketplace. And for the last several months in a row, it has worked to make fans excited to use this store. That started with the first ever Minecraft Marketplace summer sale, and it culminated with a winter event in December. Now, each month, players download millions of pieces of content (a lot of it for free). And that growth is something that is benefiting both Microsoft and external developers.

On the Marketplace, third-party Minecraft partners can sell their content. And thanks to Microsoft’s crossplatform Xbox Live support, these worlds and skins go live for players on Windows 10, mobile, Xbox One, and Nintendo Switch. This has enabled several small studios to turn their support for the Minecraft ecosystem into full-time work. It has also empowered The Minecraft team with a new way to engage and excite its audience.

Microsoft has begun using its partner support and events as effective marketing tools. And that came together in a big way at the end of 2018.

One of the best examples of The Minecraft Team’s strategy is Catastrophic Pandomonium from GameMode One. This is a map that introduces players to the new cat and panda creatures from Minecraft’s latest content patch. It gives fans a way to quickly see their new behaviors in what GameMode One managing director Sean Davidson calls a “Minecraft preserve.” 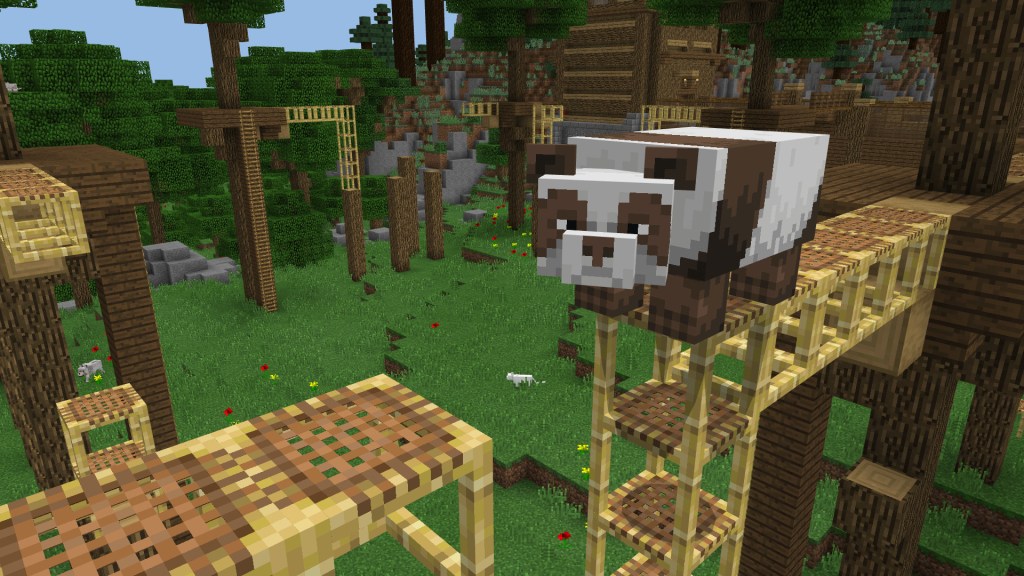 Above: A panda bear in Minecraft.

Microsoft worked with developer Gamemode One to create this world and offer it as a free download. Its release drove players into the Marketplace during one of its biggest sales of the year. And that’s something that Davidson is happy to participate in.

“We’ve worked hard to contribute Catastrophic Pandamonium to the winter sale,” Davidson explained to GamesBeat. “This product was thoroughly enjoyable to develop. It proved to be an interesting challenge and change of pace for my team. Releases weaved into a promotion are an exciting prospect for any partner.”

Building a strong Minecraft Marketplace together

Davidson sees Catastrophic Pandamonium as part of a larger effort to expose more players to the Marketplace. And that’s important to him (and The Minecraft Team) because it means more developers can succeed.

“The seasonal promos are a great opportunity to resurface older products, especially for some AAA pieces of content that may have been overlooked at launch,” Davidson wrote. “The winter promotion is no exception, with this sale focusing on bundles and free content. For the majority of Marketplace creators, the promo means creating festive new marketing assets for existing content.”

And while other devs updated their maps with holly and wreaths, GameMode One put most of its efforts into creating Catastrophic Pandamonium. But Davidson sees a synergy in this strategy that is paying off.

“The events and promos have provided players with great low-price — and occasionally free — content and have consistently driven steady traffic to the Marketplace,” Davidson told GamesBeat. “The Marketplace has opened up to an increasingly larger audience. And with that increase came more Marketplace partners. The Marketplace has been growing at a healthy rate and the future is promising.”