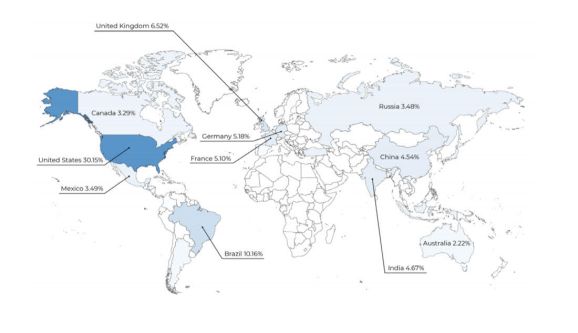 The world when it comes to soft-launching hyper casual games.

Hyper-casual games have some unique advantages over other genres when it comes to soft launches.

Their minimal designs often require little-to-no localization for international audiences, and their largely ad-based monetization strategies, mean CPIs can be more than 10-times cheaper than other game genres.

In most cases, this means hyper-casual soft launches don’t need to be limited to English-speaking countries — developers can publish anywhere in the world and find audiences that approximate the same behavior of those in countries better known for effective monetization, where higher eCPMs can yield valuable returns once the game goes global.

For the majority of hyper-casual soft launches, as with all games, the top priority should be reaching the largest possible audience at the lowest possible cost. As part of our recent hyper-casual games CPI benchmark report, the Tenjin research team analyzed millions of installs across the most popular media buying networks. This allowed us to identify the most cost-effective countries for soft launching hyper-casual games based on average CPIs and market scale. The following five countries emerged as the leading candidates:

Brazil’s smartphone market has struggled in recent years due to high taxes, strong tech embargoes, and general economic volatility. Thankfully, none of these challenges have prevented the country from embracing mobile games. Based on our study, Brazil is one of the most active hyper-casual gaming markets in the entire world, second only to the United States in total install numbers. Its rising mobile game market value has been accomplished with a smartphone adoption rate just below 40 percent.

Brazil is a major hyper-casual market, and it could get bigger. Today, the country’s mobile industry is experiencing slower growth, but some experts have predicted smartphone adoption will match the total population in a few years.

In the short term, Brazil remains one of the best candidates for soft launching a hyper-casual game. The country’s average CPI for hyper-casual games on iOS is $0.11, while those on Android are even lower at $0.08.

Mobile publishers in the United States viewed Canada and New Zealand as the ideal soft launch markets, until rising costs made them less attractive. If you look to south of the U.S., a different picture emerges.

Launching hyper-casual games in Mexico has an average iOS CPI of $0.11 and an Android CPI of $0.04. The country has a 45.6 percent smartphone adoption rate, which is remarkable for the 11th most populated country in the globe. What’s more, Mexico’s video game industry generated $1.6 billion in 2018, making it the 12th largest games market in the world. Even more impressive is the fact that a staggering 71 percent of the Mexican market prefers mobile games above all others.

Quite frankly, Mexico is becoming a mobile gaming market that publishers can’t afford to ignore. Its soft launch potential is just icing on the cake.

Mobile is a smaller portion of Turkey’s gaming market compared to other countries on this list. Mobile games brought in $372.4 million in 2017, roughly 45 percent of the country’s overall video game revenue. All the same, Turkey is a highly cost-effective nation for mobile publishers, making it an ideal test bed.

Hyper-casual games on iOS have an average CPI of $0.10 in Turkey, while those on Android have a CPI of $0.05. The country’s smartphone adoption rate is currently 37.9 percent, while most players range in age from 15 to 65 years. Turkish players also prefer to watch in-game advertisements over paying money on their games, which makes testing hyper-casual ad monetization an ideal fit for the region.

India is already an undisputed mobile gaming powerhouse. It’s ranked as one of the top twenty countries for mobile games on the planet, with total revenues amounting to just over $1.1 billion in 2018. In the same period, India’s overall gaming population is expected to grow to 628 million players.

One major reason for this growth is that mobile game and app publishing is remarkably cost-effective. Our hyper-casual publishing data suggests that iOS titles average a CPI of $0.11, while Android apps sit at $0.08. Since India is practically a primary market, that makes it an important soft launch opportunity.

Argentina has a substantial overall gaming audience, recognized as the 25th largest market in the world. While that figure also accounts for PC and console sales, the country certainly isn’t falling behind on the smartphone front. It’s ranked 19th in global revenue for mobile gaming, and is expected to reach a $332 million market value by 2022.

In terms of CPI, publishers can expect an average of $0.11 for hyper-casual games on iOS and $0.03 for Android. Coupled with the fact that 87 percent of Generation Z and X are considered “mobile gamers,” and 93 percent are open to rewarded video advertising, Argentina is an important location to cultivate your soft launch audience.

Analysis suggests that hyper-casual games are a global phenomena, but not all countries offer the same cost benefits for publishers during a soft launch. Colombia has a lower CPI than anything on this list, but doesn’t have the same market share that makes nations like Brazil so appealing.

Findings from the report suggest that publishers should always seek out countries that balance app costs, hyper-casual market share, and the overall smartphone adoption rate to suit their needs. Thankfully, today’s mobile-friendly world has no shortage of great soft launch opportunities.

Suny Cha is VP of marketing at Tenjin, a comprehensive growth infrastructure for mobile game and app marketers.