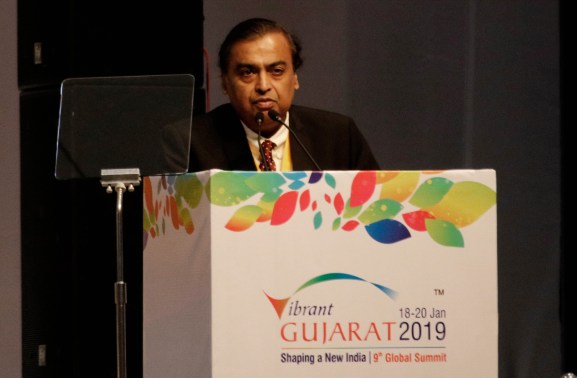 As Amazon and Walmart-owned Flipkart scramble for ways to work around the impending new strict ecommerce policy in India, the two companies today stumbled upon a new challenge: India’s richest man.

Mukesh Ambani, who runs Reliance Industries, the country’s largest industrial house, announced today that his company will roll out a new online shopping platform for 1.2 million retailers and store owners in Gujarat, the nation’s westernmost state.

The ecommerce venture will be run by Reliance Jio and Reliance Retail, two of the company’s subsidiaries, Ambani said at the Vibrant Gujarat summit on Friday. Ambani, who is also the richest person in Asia, used the platform to take a swing against Silicon Valley companies.

He said, much like Mahatma Gandhi led a movement against political colonization of India, “we have to collectively launch a new movement against data colonization. For India to succeed in this data-driven revolution, we will have to migrate the control and ownership of Indian data back to India – in other words, Indian wealth back to every Indian.”

“Honourable Prime Minister, I am sure you will make this one of the principal goals of your Digital India mission,” he added in his speech at the summit, which included India’s Prime Minister Narendra Modi, a former Chief Minister of Gujarat, among the attendees. Reached out by VentureBeat, a spokesperson for Reliance Jio declined to share more details.

Founded in 2006, Reliance Retail is the largest retailer in the country by revenue. It serves more than 3.5 million customers each week through its nearly 10,000 physical stores in more than 6,500 Indian cities and towns. The company’s vast presence in the offline, brick-and-mortar market, which still accounts for the vast majority of purchases in the country, could prove crucial as it fights Amazon and Flipkart, who in turn are locked in an intense battle of their own.

Reliance Jio is a telecom network that Ambani launched in the second half of 2016. The 4G-only carrier disrupted the incumbent telecom operation in the country by offering the bulk of data and voice calls at little to no charge for an extended period of time. It has amassed more than 280 million subscribers since launch, its parent company revealed in quarterly earnings report on Thursday.

The announcement today puts an end to the years-long speculation about Reliance Industries’ growing interest in the ecommerce space. It also comes months after Reliance, arguably the most powerful company in the nation, emerged as a surprise player in shaping the draft of the ecommerce policy, which the commerce arm of the Indian government unveiled last month.

The Indian laws prevent foreign-owned online retailers from sourcing goods from affiliated companies. In India, foreign retailers are not allowed to sell any products directly on their ecommerce sites. To bypass that, they have set up a chain of partially owned affiliate companies, from which they source products.

A draft analysis from global consultant PwC, first reported by Reuters this week, slated that the new ecommerce policy, which has been formulated to help local merchants, could reduce online sales by $46 billion by 2022. The policy would benefit Indian companies like Reliance Retail. Amazon and Flipkart told VentureBeat that they are still evaluating the new policy, which goes in effect February 1.

The drop in mobile data prices (though the quality of internet remains sluggish by global standard), coupled with proliferation of decent Android smartphones at low prices, in recent years has helped tens of million of people in India come online for the first time. India surpassed the U.S. to become the world’s second largest internet market in 2016. (China remains the world’s largest internet market.)

India’s ecommerce market has significantly benefited from the booming rise in internet users. India has become one of the most frequently cited nations in Amazon’s quarterly earnings report in recent years. The country’s ecommerce market was estimated to grow to $200 billion by 2026, up from $38.5 billion as of 2017, according to India Brand Equity Foundation (IBEF), a state-funded organization that aims to change global perception about the country.