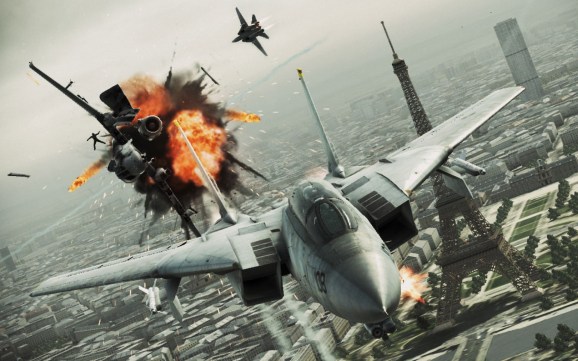 Ace Combat 7: Skies Unknown out for the PlayStation 4, and you can read our full review of the VR content and check out what we thought of playing the game with a Thrustmaster flight stick (spoiler: it’s awesome). However, the VR content is exclusive to the PS4 with PSVR and is not available in the Xbox or PC versions of the game.

At least, not yet.

On the front of the PS4 edition’s physical case it clearly states: “Play VR Missions first on PS4” and then below that in tiny print also states: “VR Missions exclusive to PS4 until January 18, 2020,” which implies the VR content could make its way over to PC VR headsets like Rift and Vive on or after that date.

We saw the same thing with games like Rez Infinite and Batman: Arkham VR, although Resident Evil 7 still hasn’t had its VR support ported so the exclusivity period is anything but a guarantee. Borderlands 2 VR uses similar language in one of its trailers as well, perhaps alluding to additional platforms later on.

This is really good news for fans of the game. Even though there are only three very short VR missions, if people show enough support for the content it could mean more VR support for this game or even a fully-fledged Ace Combat VR game in the future (fingers crossed). It’s really a shame the support is so short-lived because of just how excellent it is.