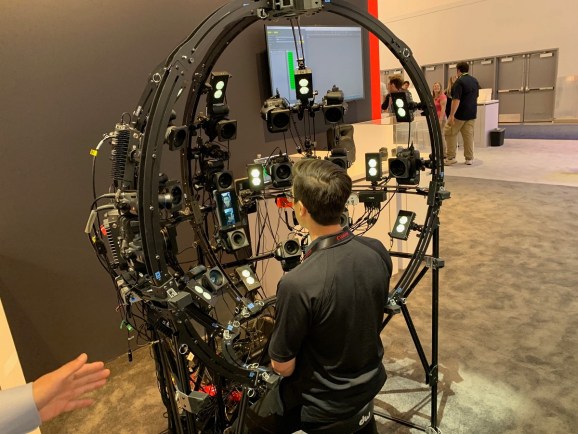 At the recent CES 2019 tech trade show in Las Vegas, Canon and Electronic Arts showed off how they capture 3D scans of the faces of busy athletes while they’re on the road.

Every year, EA needs to capture the faces of thousands of athletes for its video games, but it’s not always easy to get them to come to EA’s Capture Lab in Vancouver, Canada. So, Nigel Nunn, head of the Capture Lab, said in an interview with GamesBeat that EA uses a mobile capture rig that has 17 Canon EOS 5D Mark IV or Canon EOS Rebel SL2 cameras on it to go where the athletes are.

The high-resolution images captured can be used for games, such as FIFA, Madden NFL, NHL, NBA Live, and UFC. By capturing the athlete’s face from every angle, EA can digitize the face and use it as the foundation for its animators to create the face for the character in the video game. They can stitch that face to a character for the purposes of the game. The 17-camera rig can capture faces in a few minutes.

The athlete sits in a portable production chair. The cameras take a few simultaneous shots, all at the maximum resolution of the cameras. Then, they engage in photogrammetry — or taking the images and translating them into digital form. EA takes the system all over the world.

If they’re using realistic body motion, however, EA brings the athletes into the Capture Lab, where they capture the athlete’s face and motion on a stage with 153 cameras. Those cameras can capture all the angles of an athlete’s body, which has to be outfitted in a motion-capture suit with markers, in motion.

That enables much more accurate capture of the whole body and adds to the realism of the ultimate animated character. EA has created software to uniformly control the cameras, with all cameras taking a shot at the same time.

“For bodies, it’s different,” said Nunn. “We don’t need everybody’s body, as we can use body doubles. We do want to capture a lot of different body types. But you need a person’s face to put on top of a body.”

One day, hopefully, we’ll all be able to do this and digitize ourselves for eternity. To do it in real time, EA would have to use some kind of machine learning to digitize and animate in real time. Maybe one day. But for now, this will do just fine for the purposes of a video game.