Arkadium has teamed up with Sportradar to make it easy to bet on sports trivia questions in an attempt to make web-based content more interactive and engaging for fans.

Arkadium (which morphed from a casual game company) has created a kind of widget, dubbed a factive, that can be embedded in a story on a web site. It will present a question to sports fans, like the one above where it asks which soccer player has scored the most goals this season. The fan simply clicks on the name of the player and then the colored bars extend in an animation, showing you that Cristiano Ronaldo has scored the most.

In the deal with Sportradar, Arakadium will add its widget, dubbed InHabit, to web sites where fans can actually make wagers based on the sports trivia questions. Ads for bookmakers will ultimately appear alongside InHabit factives. Sportradar will facilitate that. In terms of betting, InHabit can be used for bookmakers activation goals, such as placing quick bets, and user acquisition initiatives.

It’s all part of Arkadium’s plan to make web publishers and brands — which have historically relied on advertising for revenue — to generate more revenues through fan engagement. Arkadium already has as its customers 500 of the world’s leading publishers and brands — including USA Today, Tribune, CNN, The Washington Post, MSN and the NBA — who are using its content. 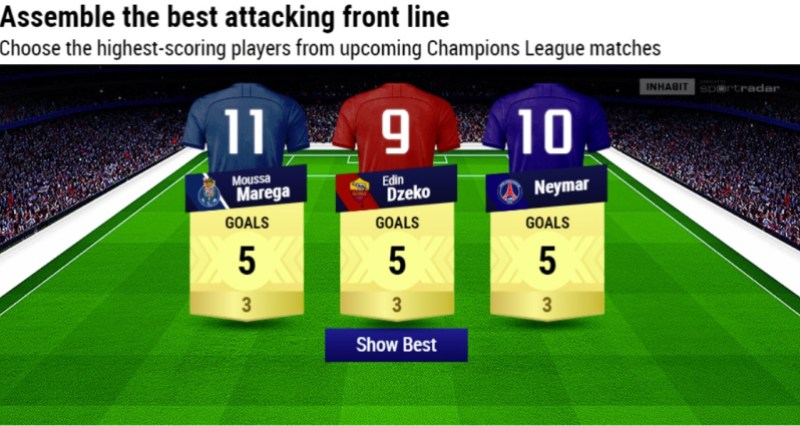 The multi-year exclusive partnership aims to shake things up by combining Arkadium’s InHabit with Sportradar’s real-time sports data. InHabit uses artificial intelligence to deliver visualizations of sports data to millions of fans and bettors around the world.

“Sportradar is obsessed with enhancing the fan experience and we are continually striving to create engaging and unique products that offer the best solutions for publishers and broadcasters to monetize,” said Jonathan Earle, customer director of sports media at Sportradar, in a statement. “The way in which sports fans are consuming content has dramatically changed and fans are looking for more interactive, visual stories to help keep them informed of the latest sports news. Partnering with Arkadium will help us to lead the next generation of sports engagement.”

“Our partnership represents the future of sports marketing,” said Kenny Rosenblatt, president and cofounder of Arkadium, in a statement. “One where fans are deeply engaging with the players and teams they love, while providing publishers and advertisers the time, attention and relevant audiences that they’re looking for.”

Sportradar has an exclusive agreement with Arkadium to create factives for English Premier League matches and UEFA Champions League matches in a number of languages. Additional sports included are NBA, NFL, MLB, and NCAA Football and Basketball.

Sportradar is a data partner with more than 1,000 companies in over 80 countries, and it serves as the official partner of the NBA, NFL, NHL, and NASCAR as well as FIFA and UEFA.