When it comes to video games, talk about communities more often deals with players than what we’re playing onscreen. As I tinkered with Far Cry: New Dawn for a couple of hours during a play session last week at Ubisoft in San Francisco, my biggest takeaway was the clash of cultures happening between the open-world spinoff’s three factions. I’ve been thinking about the interplay between communities ever since.

It turns out Ubisoft’s spent a great deal of time thinking about communities as well.

“A pretty long time. I was part of the narrative team on Far Cry 5, and we thought a lot about it then,” said Olivia Alexander, the narrative designer and scriptwriter for Far Cry: New Dawn. “We had to.”

New Dawn builds off the nuclear bomb ending of Far Cry 5. Hope County wasn’t the only place dealing with devastation: a calamity of some sorts (Ubisoft isn’t saying what happened yet) wiped out much of humanity. Yep, it’s Far Cry: Post-Apocalypse. You’re part of an effort to protect people and restore society, and as you come to Hope County, you find three groups of people trying to live together … and not always peacefully:

“The way I prefer to break it down: The three communities are all diametrically opposed because one lives for today, the Highwaymen; one clings to the past, the Survivors; and one looks to the future and make something unrecognizable, New Eden. All of these things are diametrically opposed, and which one of these things can really work besides the other. As we evolved the story and communities, the thing we realized is that living for today is resistant to planning ahead or living with much reference for the past.”

“We are the village that raised the baby in terms of narrative,” she said.

Alexander and I talked about Far Cry: New Dawn for about 20 minutes last week. Here’s an edited transcript of our interview. 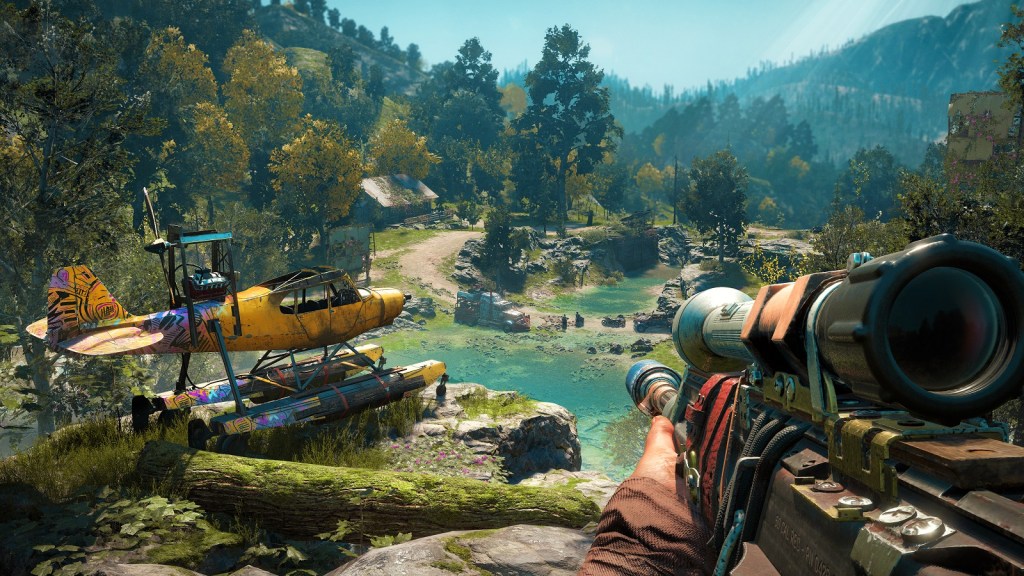 Above: That floatplane can’t fly, but it cruise down the road! Or the river.

GamesBeat: What do you mean by “baby”?

Olivia Alexander: We [as a narrative group] shared a lot of ownership of a lot of things. For example, a lot of stuff in the open world, we all helped out on. There are specific missions that we wrote, specific characters that we were the caretakers of, specific beats we were the caretakers of. My colleague, Marri, had a lot of conceptualization of New Eden. I had a lot to do with the conceptualization of the Highwaymen and The Twins.

GamesBeat: I thought there was only one nuclear bomb. The whole world’s gone to hell?

Alexander: There was a lot of chaos after the initial explosion at the end of Far Cry 5, and it would be very difficult to know what happened to the rest of the world during that chaos. Our setting of Far Cry: New Dawn dictates just that: that there was a global event, and that event in the middle of that chaos was the very beginning of a chain reaction that sparked all over the world.

Alexander: The narrative team did a lot of research as to what would happen both mainly on a global scale in terms of population, geography, weather patterns, that kind of thing. We made up our own world scenario and consulted meteorologists to figure out what those side-effects would be. Those two experts specialize in both volcanic activity and nuclear activity and the potential fallout of those things, and that scientific data really informed our creative process and how we evolved Hope County in the setting of Far Cry 5 to Far Cry New Dawn

GamesBeat: Why use a global calamity as the background for New Dawn?

Alexander: We knew on the Far Cry brand that we wanted to have a post-apocalyptic setting for quite a while and the ending of Far Cry 5 led to that very organically. Early concepts for Far Cry: New Dawn was happening as Far Cry 5 was winding down, so it was a very easy hop-skip-and-a-jump from one to the other.

GamesBeat: Why does the Far Cry narrative team want to do a post-apocalyptic narrative when so many others have already done so?

Alexander: We wanted to do it because Far Cry has had its own brand of storytelling style, humor, drama, that sort of thing, and we felt we could do it well. We wanted to explore these themes, both visually and new themes narratively.

Alexander: One of the really cool things that we explore is how different generations view change and how they deal with it as both individuals and units. Carmina [Rye, the baby born toward the end of Far Cry 5] sees the world in a completely different way than her parents do. Her parents see a decimation of culture, infrastructure, life, lifelessness; and Carmina sees a world full of life, full of new beginnings — full of new adventures, things that she’s never seen before. Great stories of old, mythical things. Almost a world of magic, even in a world of quite a lot of hardship.

And that’s true in terms of generational things for each of our three factions, because we have Carmina’s metaphor in the survivor faction. In the New Eden faction, how the new members of the cult see the world is evolved and different from how Joseph Seed saw the world, and how he has been changed by the collapse. And even the Highwaymen, how Mickey and Lou see the world is different from how their father, who watched the bombs fall, saw the worlds. The Twins are shaped by how the world has evolved, and their father is shaped by how the world was before. The idea that different generations are seeing this huge, huge shift and change in the world differently is something that I think people can get behind. 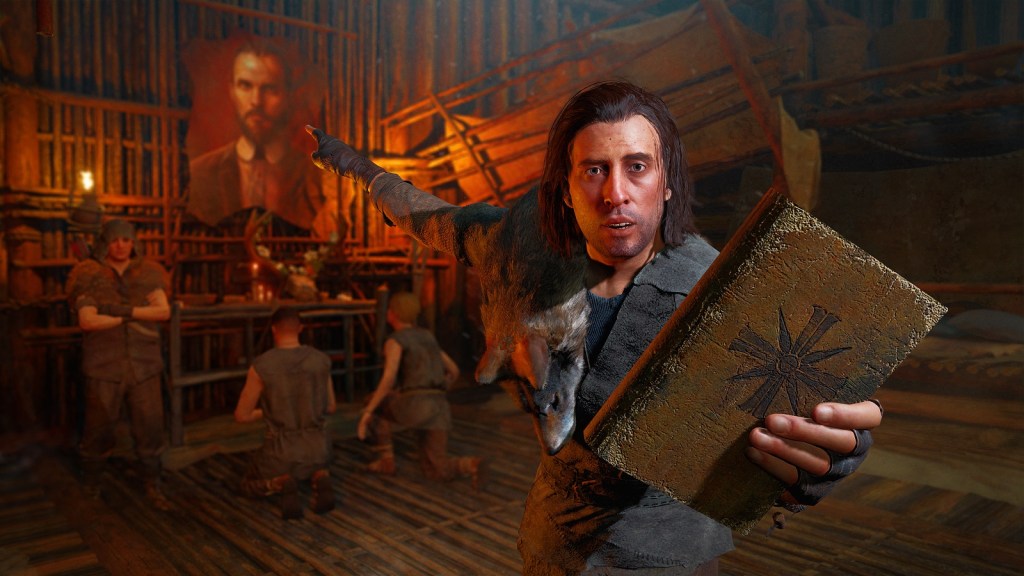 Above: New Eden has turned a new leaf.

GamesBeat: Grace, an older black woman who’s also a mentor to Carmina and an ally to the player, embodies this shift as well, doesn’t see?

Alexander: She does. She’s someone who saw both sides.

GamesBeat: But her shift is different than Carmina’s parents. Where they are lamenting what was lost, Grace says to Carmina’s generation, “Now it’s your turn, your generation’s turn” to do something with this.

Alexander: Exactly. She’s an example of someone of Carmina’s parents generation whose opinion is different. She looks at Carmina — she taught Carmina how to shoot — she sees how she has grown. She looks at Carmina and sees her as a walking metaphor for the new growth in the world. Something that was so delicate and scared, or something that people were scared for, not that she was scared herself, and how Carmina has become this very confident, indomitable, and self-aware force. She sees and thinks that if Carmina can bring herself up, even if I’m going blind and don’t have too much longer to go, she’s going to be OK, so even if the world is different, Carmina will be OK, and that’s fine.