GamesBeat: If you want to succeed solo at the very beginning in free play, is there a good idea for what you should do at the start? I saw something very big, and it didn’t seem like a good idea to take that on by myself.

Gamble: That’s a good reaction. Avoid the bait. Like in any other game, people will learn by dying. I knew I wasn’t ready to take on the Weapons in Final Fantasy until I knew I was ready. After that, I went in full bore. But the game will tell you “no” because it’ll keep on killing you. You’ll learn eventually.

There are things for you to do, obviously, as a solo player. Free play can be played very much as a solo experience because you can split up the squad. One person can be in the northeast, another person in the southwest, and it holds up all the same.

GamesBeat: Why can’t you fly for longer periods of time?

GamesBeat: The weapons you start with, what happens to those over time?

Gamble: You can do a couple of things. Your Javelin is your primary vehicle for progression and customization. You can get components and gear, which change fundamental abilities like how many supers you have, or how long you can fly, or your cooldown rates and things like that. Then you can find new weapons — new shotguns, new assault rifles. This is the constant chase of the looter shooter style of game. Your weapon is only the best until you find a better one, and then you salvage it and scrap it and bring the new one in. Or you collect an arsenal of different types of weapons that you find along the way. That’s the primary progression model in the game.

GamesBeat: If I’m playing Colossus now, what am I experiencing and what am I potentially missing out on by not playing the other classes?

Gamble: It’s a playstyle, essentially. A good analog, obviously–the Colossus is the tank. People who play the Colossus usually like to play tanks. They like to do debuffs and buffs. They like to gather aggro while everyone else takes the enemies out. That’s a play style. You’re only missing out on a different play style. But even then, you can just go play the Storm. You’re not locked into a class for the whole game. You just switch whenever you want. 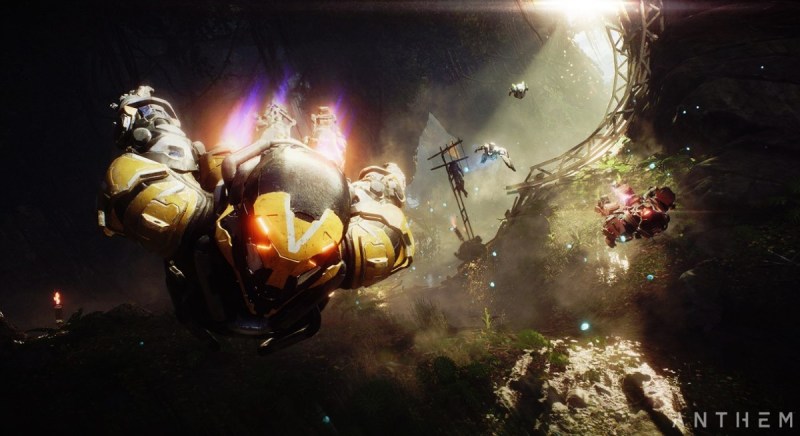 Above: Anthem’s Javelin exosuits will get you off the ground.

GamesBeat: The easy thing I found to do was the ground-pound. And then my colleagues could shoot stuff.

Gamble: Yep, that’s definitely a good move. Have you held your shield up? That’s the aggro move — the enemies will attack the Colossus, hopefully, everyone else attacks them.

GamesBeat: Is that on a timer?

Gamble: The shield isn’t. But you can do a shield bash, do the shield while you fly. You have a bunch of things you can do.

GamesBeat: Am I flying for a shorter time as the Colossus?

Gamble: No, that’s purely based on the gear you have. If you have a good gear piece as a Colossus and then put it on as a Storm, it would have the same effect.

GamesBeat: Right now there aren’t that many things to choose from in the main story. But is it going to be clear where the main story is if you want to stay on that track?

Gamble: It’s denoted differently in your journal. It’s called the Critical Path, something like that. You can track quests and untrack quests just like you can in many other games. You’ll gather a bunch of quests, and then you can choose which ones you want to track. Then it will lead you towards them. You should be about four missions you can choose from right now. One of those is the critical path that moves you forward. I believe usually the mains are yellow and the side missions are blue. But it’s tracked in a different thing inside your journal. When you open it up you’ll see — “These are agent missions, and these are the critical path.”

GamesBeat: The navigation when you’re flying and moving around–you know what general direction to go in, but you can’t very precisely guide people, I guess?

Gamble: Well, we don’t want to. You follow the breadcrumbs, but there are areas for you to diverge. We don’t want to breadcrumb the player every 15 meters around the map. Otherwise, they don’t get to explore anything. 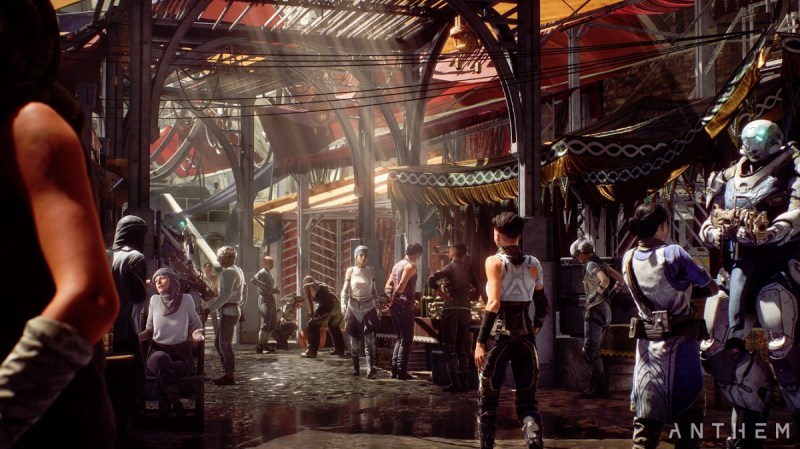 Above: Inside Fort Tarsis

GamesBeat: So it’s OK if you get lost?

Gamble: Yeah! Just open up your map and see where you’re going. But there should always be an objective marker in the map, in the world, which leads you toward the right direction, at least on the missions. In the free play we want you to play freely.

GamesBeat: How quickly are we going to run into what you might call the real villains here? What’s her name?

Gamble: The Monitor, yeah, and the Dominion. I don’t know if you’ve played Incursion yet.

GamesBeat: I’m in the middle of starting it.

Gamble: There you go. During that mission. That’s the second critical path mission. That’s maybe not chronological, but the way this works, you go into the game, go through the tutorials, and it goes wide. There’s a critical path that goes through all of that, and then all the other things you’ve been playing are side content, Agent stuff.

GamesBeat: Will we know what this is all about fairly quickly, then?

Gamble: Yeah, who the enemy is.

GamesBeat: What do you think about the outcome so far?

Gamble: I’m pretty excited about the buzz we’re building. The fact that it’s a new IP again–it takes time for people to get their hands on it. We want people to play the game. You can tell all you want, but it doesn’t actually do anything until people play it. That’s why we’re releasing a demo next week.

GamesBeat: How much alpha and beta testing has there been so far?

Gamble: There were a lot of closed, NDA’d events. There’s a build on servers that many people are playing. We haven’t done a public beta, but the demo is essentially–everyone will get to play it for the first time. 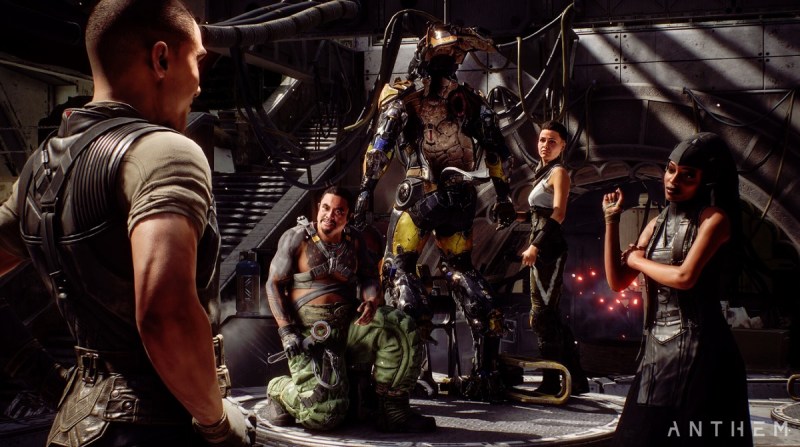 GamesBeat: The games where people do a giant public beta and then launch many months later, that seems to be one way to produce a game. But you guys aren’t doing that. Do you have more confidence in where this is going?

Gamble: Yes and no. It’s just a strategic way of doing it. Once the game is out, it doesn’t matter if you’ve done a lot of beta testing or not. There are still issues, and we want to find the issues as quickly as possible. All that said, we’ve done a lot of these things. We just haven’t done a lot of public betas yet. We’ll find out stuff from the demo as well. We’re using that. It’s just a change of strategy. We are doing testing. We’re just not doing a public one that everyone can join up for.

Plus, we think the game is pretty solid. We’ll look out to see if issues come up over the next month and we’ll fix them as we get to them.

GamesBeat: Is this something like The Old Republic as far as how much time you’ve put in? Is it a game you’re going to be doing forever?

Gamble: I don’t know. It’s a big commitment. But there’s a team in Austin that’s going to basically take on the development and live service of the game after launch. There are others in Edmonton who will move on to different things. BioWare is now big enough that we can handle multiple games in development at once.

GamesBeat: Back to Star Wars?