I almost can’t believe it, but Kingdom Hearts III is now a real game that I’ve actually played. And I liked it! You should go read my review before the Disney crossover extravaganza releases on January 29 for PlayStation 4 and Xbox One.

But as much as I enjoyed Kingdom Hearts III, Square Enix made some better design and storytelling decisions back in 2002 on the PlayStation 2.

It makes me feel a bit old to realize that the first Kingdom Hearts is a retro game now, with it being almost 17 years old. I mean, 17 years before Kingdom Hearts, we were still two years away from freaking Mickey Mousecapade for the Nintendo Entertainment System. And since Kingdom Hearts is retro, I thought I’d point out some of the things that I wish Kingdom Hearts III did as well as its ancestor.

Keep in mind that some of what I talk about may be spoilers for you, although I’m not going to be talking about major story events. But I will be discussing things about the design and pacing of Kingdom Hearts III. 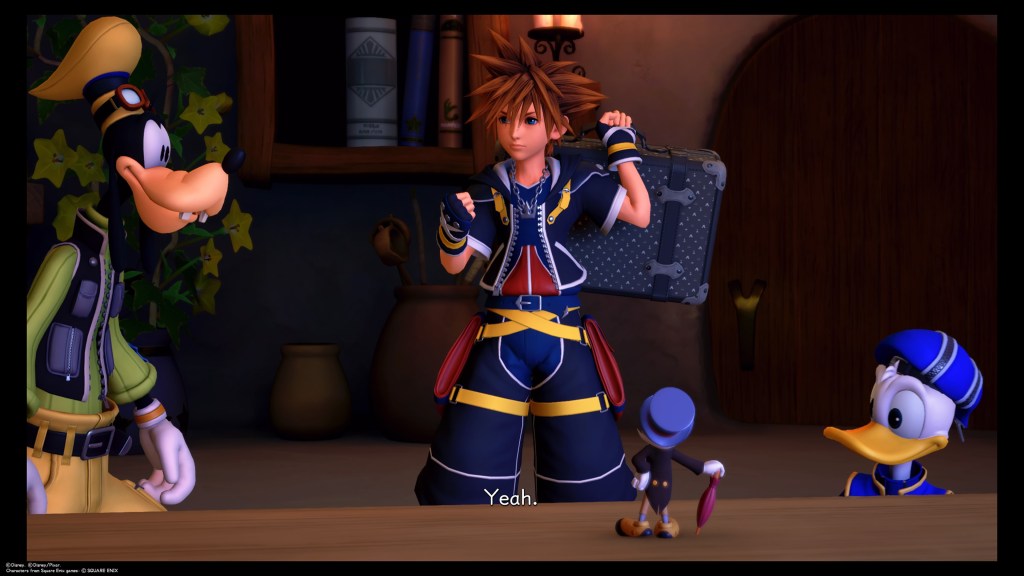 Above: We’re off to do … something.

Kingdom Hearts has a simple story with characters that have clear goals. Sora is looking for his friends. Donald and Goofy are looking for Mickey. This is why the trio explores all these Disney worlds. It gives them motivation and helps to push the narrative forward.

Kingdom Hearts III follows the formula of Sora, Donald, and Goofy visiting Disney-themed levels, but it’s not always clear why. Sometimes the reason is so that Sora can regain his strength (I guess he needs to grind some levels). Sometimes it’s so he can discover something called “the power of awakening,” although no one actually knows how to obtain it.

Sora does have occasional goals, but he’s unsure how to achieve them. When he goes to a Disney world, it sometimes feels like he’s wandering around aimlessly, just kind of hoping for something to happen. Meanwhile, much of the important plot-forwarding developments are driven by other characters via cutscenes that you watch between levels. 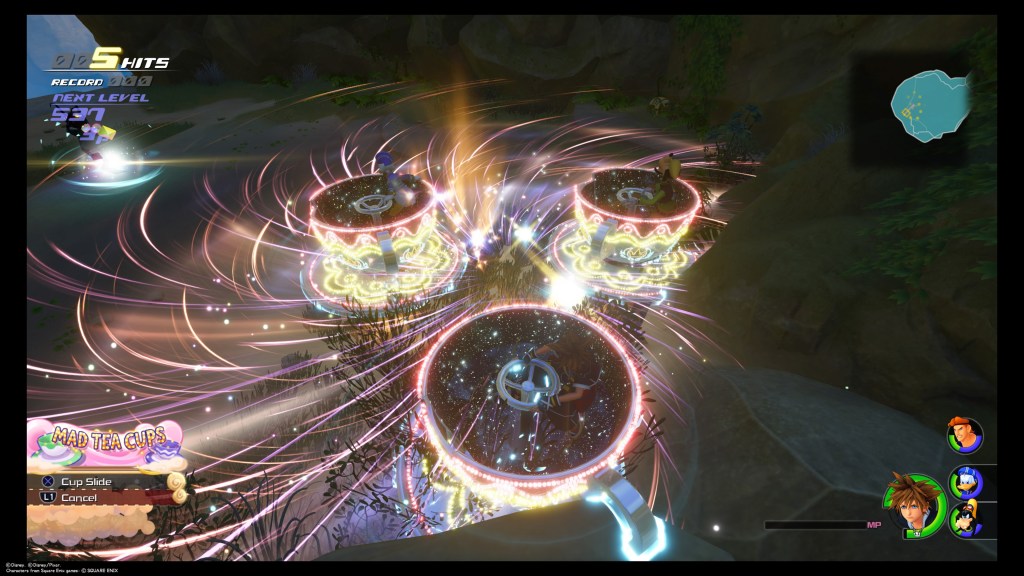 Above: Teacups of death.

Kingdom Hearts III has too much going on with its combat. It’s my biggest criticism of the game. Every 5 seconds you can summon a magical pirate ship or turn your weapon into a fireworks bazooka or something. It’s all very flashy and cool looking, but it overshadows the basics that make Kingdom Heart’s action RPG combat: swinging a Keyblade and using simple magic.

The first Kingdom Hearts kept things simple and clean. You only have your Keyblade attacks and magic. Well, you do also have Summons, which temporarily bring a Disney character into the battlefield. They are the only flashy special moves in the game. And these Summons are situational, as they take up precious MP that you’d rather use on spells like Fire and Cure. Meanwhile, most of Kingdom Hearts III’s over-the-top attacks are free to use and become available either at random or with such little effort that you’ll unlock them by accident them all the time.

Sure, the pace of the action in the first Kingdom Hearts feels slower, but that also makes it feel more impactful. Every attack is deliberate, while Kingdom Hearts III encourages you more often to spam buttons and special abilities that deal large amounts of damage to any foe remotely near you. 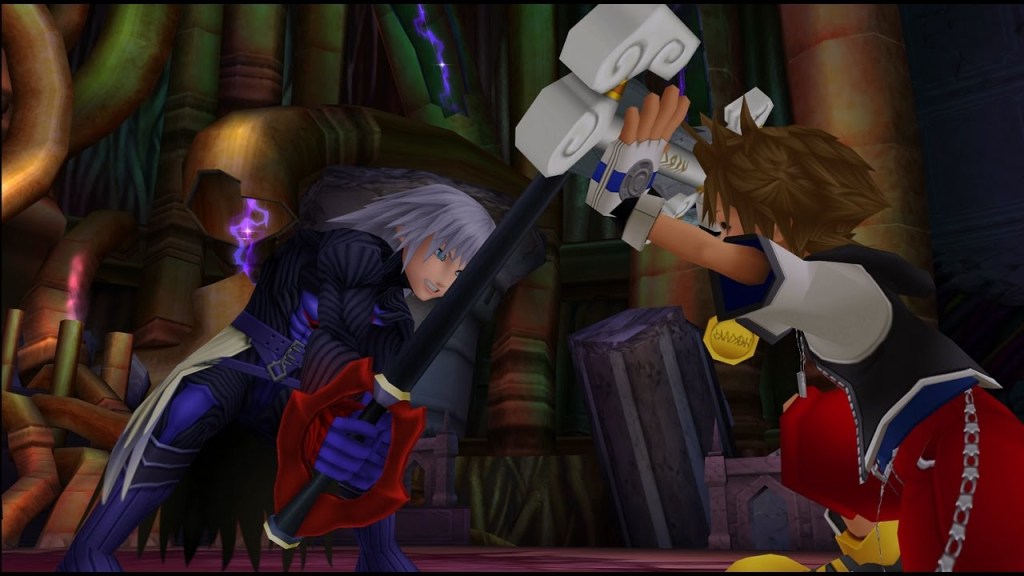 Above: Crazy shit went down in Hollow Bastion in the first Kingdom Hearts.

The original Kingdom Hearts has a fantastic final act. Not only does it have memorable cutscenes and cool final bosses, but you also have two long and challenging final dungeons with Hollow Bastion and End of the World.

Kingdom Hearts III’s last act is really just a marathon of cutscenes and bosses. There’s no dungeon to tie things together. Once you beat the final Disney world, it’s a sprint to the end, with little room for exploration or regular battles. Now, Kingdom Hearts III has a lot of plot to resolve by its end, so I can understand why it has to devote so much time to story.

Kingdom Hearts III’s ending isn’t bad. It has plenty of awesome cutscenes and bosses. But it is a shame that we don’t have a cool final dungeon to travel through as a final test of our skills before the final showdowns. 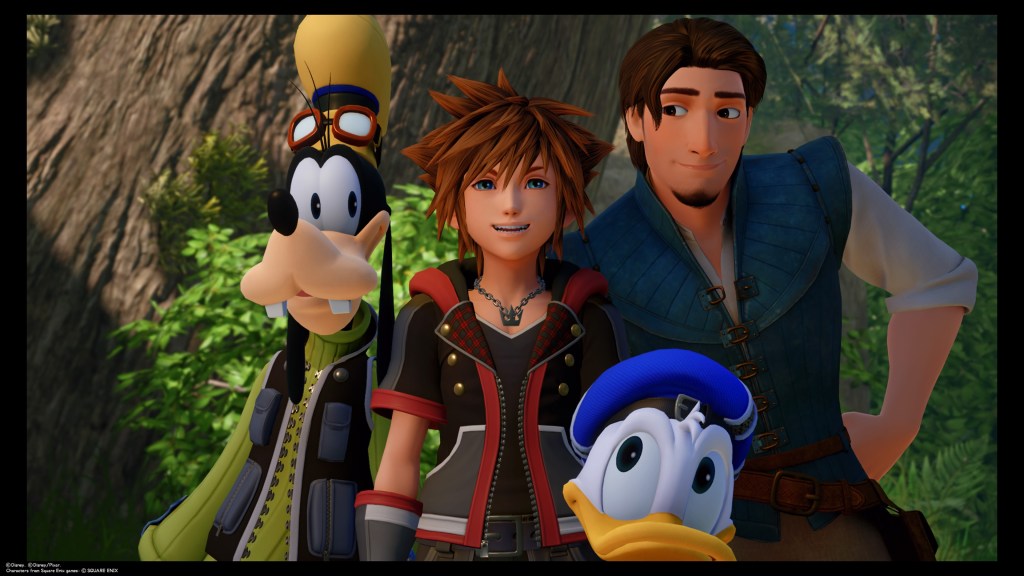 Above: Flynn with his new anime friends.

Kingdom Hearts III does do some things better

Kingdom Hearts III also gets more creative with its level design, with some worlds playing out like miniature open world games. The Gummi Ship sections — a kind of spaceship-shooter experience that you have to do before going to a new world — are also more enjoyable and easier to just blast through if you don’t care for them.

Still, I prefer the original Kingdom Hearts. Again, I dig Kingdom Hearts III, but it is often a victim of its own excess. The first game has better pacing and a story that you can actually follow.