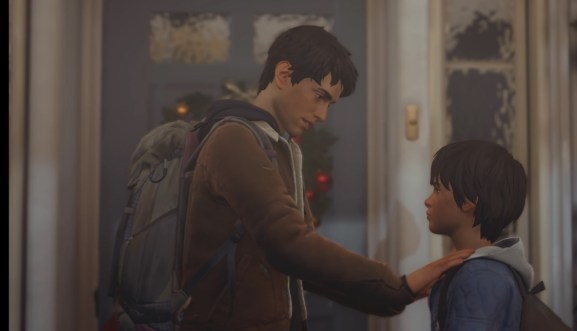 Sean always cautions Daniel, the younger boy, to keep his powers under control.

Life Is Strange 2 Episode 1 did a stellar job showing the bond between two brothers with enough supernatural drama injected into the suburban narrative to make for a riveting story. Episode 2, released last week, continues that story but with just a little too much of a lull in the action.

Dontnod Entertainment and Square Enix released Episode 2 on January 24 on the Windows PC, PlayStation 4, and Xbox One. I’ve played through both episodes, as well as the teaser story, The Awesome Adventures of Captain Spirit. These are my impressions.

Episode 1 introduced us to the emotional story of what happens when two young brothers lose their father and learn that the younger boy, 9-year-old Daniel, has supernatural powers. They flee the police and their Seattle life, surviving on the run in the woods with only each other to depend upon.

Life Is Strange 2 takes place in the same universe as the previous games — Life Is Strange (2015) and Life Is Strange: Before the Storm (2017). It happens about three years after the events of the original game, but it is an entirely separate story starring two young brothers, Sean and Daniel Diaz.The game asks you which final decision you made at the end of Life Is Strange (2015) so that it can customize some elements in the game. Episode 2 also asks if you have played Captain Spirit, as the decisions you make in that story affect the boys’ tale.

In the first game, the character Max Caulfield discovered she had the ability to rewind time at any moment and re-enact choices that can have a “butterfly effect” on the world, where a small event like a butterfly flapping its wings can have a huge impact. In this story, Daniel finds out that he has the power of telekinesis — or the ability to move physical objects with his mind.

While Max has to decide how to rewind time, Daniel and Sean have to decide when to use the telekinesis or to refrain from doing so. Since the boys are on the run, the older brother Sean has to spend much of his time forcing Daniel to hide his powers. That’s why this episode is called Rules. Regarding his powers, Sean tells Daniel, “Never in public. Never talk about it. Run from danger.”

The episode starts months after the first episode in a place in the woods where the boys are holding out for the winter. But Daniel takes ill, and Sean decides the only way to get him medical help is to take Daniel to the home of their grandparents. That’s a tricky relationship since their father parted ways with them after his wife and their daughter Karen abandoned the father and the two boys. Once the boys arrive at the home of Stephen and Claire, the grandparents — who happen to live next door to someone we’ve met before — there are even more rules to obey. As the boys learn the scope of Daniel’s powers, it’s more important than ever that he doesn’t use them.

In this episode, you have to make more decisions to keep on the path of survival. At the close of the game, you’ll be able to see whether the decisions you made match up with those of others playing the game. I’ve avoided most spoilers in this review.

Sean has to model the right behavior for Daniel 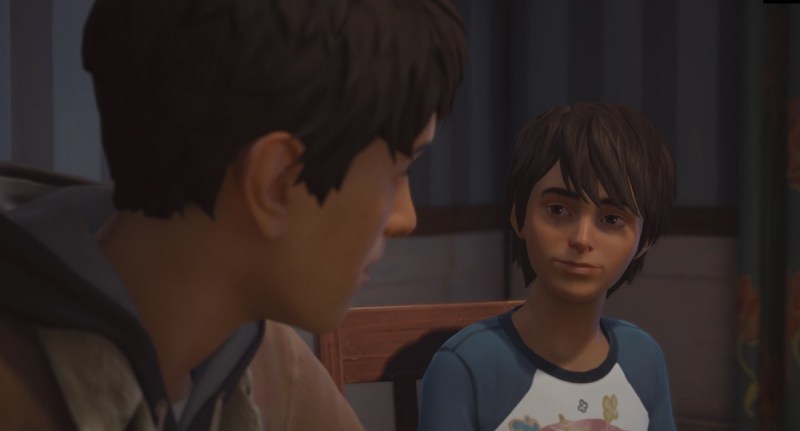 While Sean is a high-schooler, Daniel is still an impulsive kid. He not only doesn’t listen to Sean’s rules, which are meant to keep them from drawing attention to themselves while they are wanted. Daniel also learns by watching the behavior of others around him, most of all Sean. If Sean says you shouldn’t steal and then steals something himself, Daniel will interpret that as being OK to break the rules.

That comes back to either haunt you or help you later in the game, as Daniel has enormous power without realizing yet that he has the enormous responsibility to use it wisely.

This reminds us that the core of Life Is Strange is about relatable characters, realistic settings, and real-world problems — all layered on top of a supernatural story that leads to some serious drama. Once again, Dontnod’s team shows that boys can be sensitive and emotional. Often, what matters is saying the right thing to avoid a powder keg explosion.

If you make expedient choices, you may unintentionally go down the wrong path. Episode 2 continues to demonstrate that establishing trust and a good relationship is what holds the brothers together.

Subtle ways to make a point

Above: A reminder of a missing father.

To get the magnitude of what the boys are up against, Dontnod’s artists depict the boys as tiny little specks in a giant, snow-covered forest. As the boys journey into the snow, they do so silently while a beautiful song plays in the background. This is a way to skip the kind of long journey through the woods that we witnessed in Episode 1. But it’s also a way to convey something without dialogue.

The camera lingers on a cup that says “Best Dad Ever.” It’s a reminder that the boys have lost their father and that this still weighs very heavily on their hearts. The animators do a great job of capturing the emotions of the boys. At one point, the camera zooms in on the sparkling, almost emotional eyes of Daniel, and it pulls back. Daniel goes out of focus, and the face of Sean sharpens. His eyes also sparkle with the same edge of emotion.

The musical score from composer Jonathan Morali is great, as are this episode’s songs by Mt. Wolf (“Red”), First Aid Kit (“I Found a Way”), and Sufjan Stevens (“Death With Dignity”). With that music, this game gives you plenty of moments to just sit, think, and admire the beauty of the landscape around you.

Who can you trust?

The first episode taught us that the boys are vulnerable out on the road. Sean and Daniel come across strangers on the road and in small towns, and they have to decide whom to trust. If they trust in the right people, they can get aid and comfort on their difficult journey, but if they make the wrong decisions, it can be disastrous.

This is never truer than when Daniel and Sean arrive at the home of their grandparents. The elders, Claire and Stephen, have heard about the incident in Seattle via the news, and they know that they could be committing a crime by aiding the boys. Will they turn in the boys? Should the boys trust them? Should the boys trust the neighbors, the Eriksens, or the people of the small town?

If they reach the deepest moments of trust, you can learn some secrets that you might not otherwise know. But if they guess wrong on whom to trust, it spells trouble.

As with the first episode, the characters are drawn well, and interacting with them can yield surprises. The burden on figuring out people falls on Sean because Daniel is too trusting. 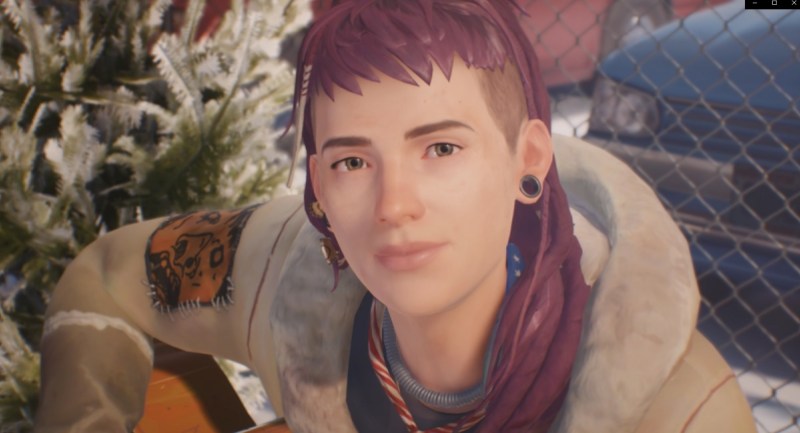 Above: A new character in Life Is Strange 2 Episode 2.

The boys are trying to make their way from Seattle to Puerto Lobos, Mexico, a town where their father came from. But along the way, they meet interesting characters like Chris, the hero of Captain Spirit and a victim living in the shadow of his father, who is mourning in a very bad way over the death of his wife and Chris’s mother. When Daniel and Chris meet, they become instant buddies.

But Daniel wants to share the secret of his superpowers with Chris, and that can lead to disastrous outcomes. Sean, meanwhile, befriends a young punk girl who plays the guitar and sings for money. She sings a pretty song, and they hit it off. She’s traveling with a boyfriend, and so, this might not lead anywhere. But it’s something that stirs the prospect of romance for Sean, pulling him away from his duty to be the missing father for Daniel.

If there’s any tantalizing character waiting in the wings, it is Karen, the mother of the two boys. Sean has bitter memories of being abandoned, but Daniel never really knew his mother. They learn more about her at the grandparents’ house, and I hope this means she’ll be coming into the story later on.

Slow moments mixed in with repetition 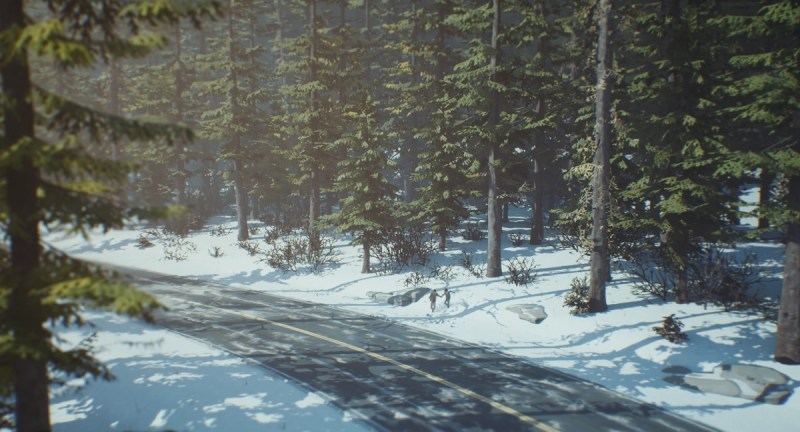 Above: Thankfully, we don’t have to walk in the woods for long in Life Is Strange 2 Episode 2.

Life Is Strange has been criticized as a “walking simulator” by people who don’t appreciate its finer points. That was evident once again in this second episode, which wasn’t as full of action — if you can call it that — as the first episode. The first episode created the drama for the boys as they fled Seattle, and this time, the biggest drama has to do with how much you trust your grandparents while the law is hunting you down. In this case, like in Captain Spirit, you spend a lot of time digging around boring stuff in a house to find something important.

As a self-contained vignette, this story isn’t as interesting as the first one. The emotional peaks aren’t as high. But taken as a piece of a larger story, it’s fine for it to be a slow part of a larger tale. I trust the Life Is Strange team at Dontnod to create a compelling story, but it has to be hard for them to create a compelling story arc, not only for the whole game but for each episode as well. 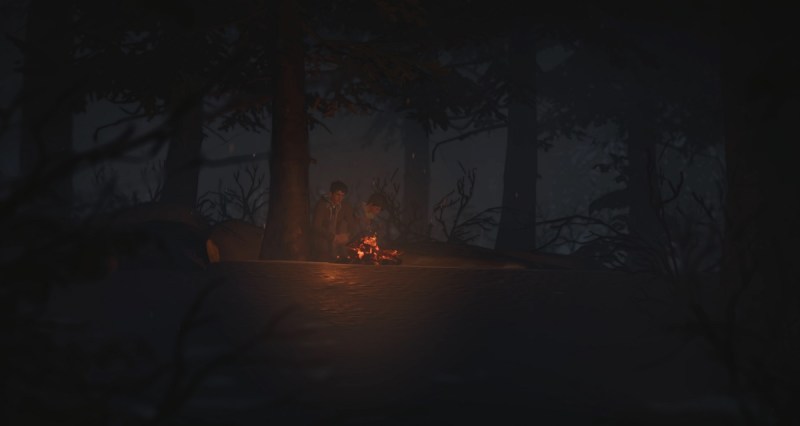 Above: Alone in the dark.

A couple of times in the game, characters entirely disappeared from the scene. Sean was speaking to one character who simply wasn’t there, even though the audio from both characters was fine. This happened again in a truck. Sean was riding in a moving truck that actually had no driver. That added some unexpected comedy to the scene. 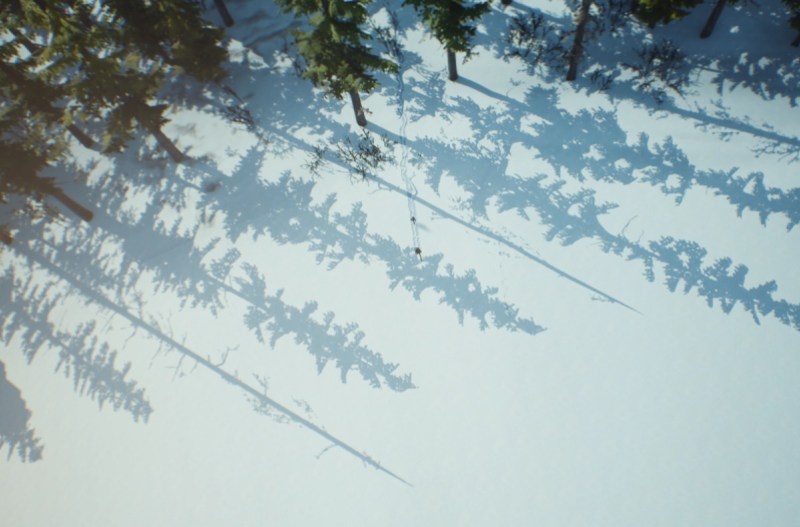 Above: Two tiny specks in a forest.

I like this story, and I hope to finish the rest of the episodes. But I am hoping this is not the lull before the lull. Because the storytelling can’t afford to get slower than this. I trust Dontnod to tell a great story, based on its history. Daniel is clearly impulsive and quick to make decisions or forget the rules. His morality is still developing. It’s a big responsibility for you, as the player, to make the right decisions and get Sean to offer the right guidance for Daniel.

But this episode made me a little nervous. After all, I don’t want the critics who call this a “walking simulator” to be right. I want a memorable tale. I trust it will happen — but just not in this episode.

I still like the nuances involved in making the right choices, not only for the sake of survival but also for the survival of trust between the brothers. I would still much rather play this game all at once, so I don’t have these moments of doubt about the quality of each episode. But I can still see that the potential for a great story is here.

Disclosure: The publisher provided us with a code to play the game on the PC.