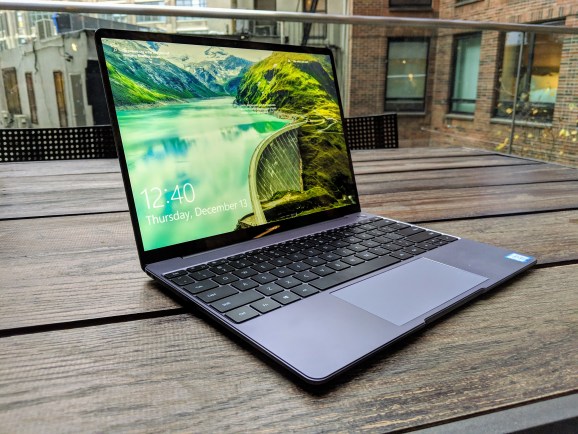 Huawei, one of the largest electronics manufacturers in the world — with over 200 million smartphones and 100 million smart devices sold — is no stranger to the laptop market. The company launched its inaugural portable PC — the Matebook — in 2016, and the device went on to spawn a veritable portfolio. Like clockwork, the Beijing company is now refreshing its lineup with a new addition: the Matebook 13.

The Matebook 13, which made its stateside debut at the 2019 Consumer Electronics Show in Las Vegas earlier this year, is a 13-inch 2-in-1 with an Intel Whiskey Lake processor and a dedicated Nvidia graphics chip. It complements Huawei’s flagship Matebook X Pro and Matebook D, both of which launched in late 2018, but it’s by no means a compromise — the 3:2 aspect ratio FullView touchscreen has an 88 percent screen-to-body ratio that Huawei claims is “industry leading.”

Tomorrow marks its first day of availability on Amazon and Newegg, ahead of launch on Microsoft.com and in brick-and-mortar Microsoft stores in the next few weeks. For a limited time, Huawei’s throwing in a one-year subscription to Microsoft Office 365 Personal edition and the MateDock 2 — a multiport adapter with a USB-A port, USB Type-C port, HDMI port, and VGA port — with every purchase.

Ahead of the launch, Huawei provided us with a review unit. Here are our first impressions.

As hinted at earlier, the Matebook 13 has a decidedly smaller footprint than the 14-inch X Pro and 15.6-inch D. That said, I didn’t feel like I was getting the short end of the stick — it’s comparable in size to my trusty Surface Pro 4 and just about the perfect width and height for a cramped economy seat on a domestic flight from New York to Las Vegas.

The Matebook 13 measures 11.26 inches wide, 8.31 inches deep, and 0.59 inches high, and it weighs in at 2.85 pounds. That’s only marginally heavier than Apple’s new MacBook Air, which is 1.75 pounds, and Dell’s XPS 13, the lightest version of which weighs 2.67 pounds. In fact, it’s remarkably light — almost fragile, in fact — but without feeling too small in the lap (or on the tray table). 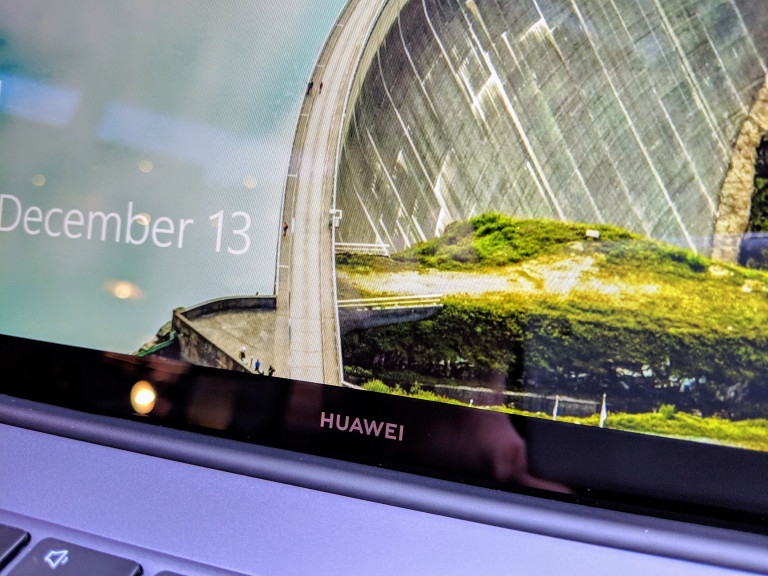 If you were to pry open the Matebook 13’s chassis — a procedure I don’t recommend, lest you void your warranty — you’d first encounter what Huawei calls Shark Fin Design 2.0, a dual-fan cooling solution that reaches up to 8,000 revolutions per minute. Exactly what lies beneath it depends on which configuration you choose:

A polished metal unibody undergirds the tightly packed components, the curved edges of which are a standout feature. The Matebook 13’s 5,252 diamond-cut, sandblasted aluminum chamfers wrap smoothly around the chassis’ edges and protect against abrasion.

I opted not to conduct a drop test, but the device certainly feels sturdy. And after a week of lugging the Matebook 13 around from press conference to press conference, it hasn’t picked up any noticeable nicks or scratches, which is more than I can say for Google’s Pixel Slate.

The aforementioned screen clocks in at 2,160 x 1,440 pixels (200 pixels per inch), with a 178-degree viewing angle, and reaches a maximum brightness of 300 nits — plenty bright for outside viewing in direct sunlight. It supports 100 percent of the RGB gamut for a total of 16.7 million different colors, and it’s adaptive — Huawei says it brought the blue light-filtering eye comfort technology in its smartphones and tablets to the Matebook 13. 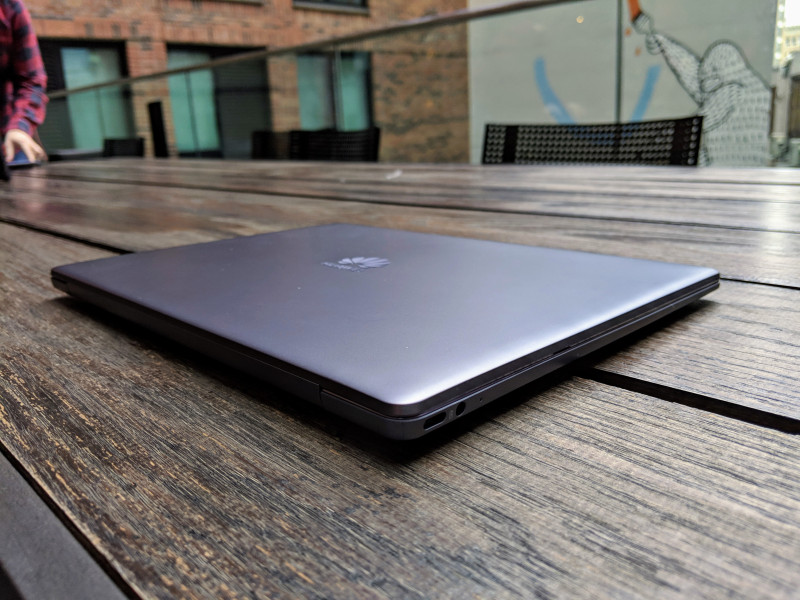 A laptop is nothing without a bang-on keyboard, of course, and Huawei contends that the Matebook 13 has one of its best yet. It’s full-sized and spill-resistant, and it offers 1.2 millimeters of key travel — for reference, a hair shallower than Microsoft’s latest-gen Type Cover (1.3 millimeters).

The keys are springy with bright backlighting, but I can’t say I fell in love with them. I recently had the opportunity to review the Pixel Slate Keyboard, which, like the Type Cover, has a 1.2mm key travel. The Matebook 13’s keys felt much too shallow by comparison, though your mileage may vary — to be fair, I’m more or less married to a mechanical keyboard. Lots of laptop keys feel too shallow to me.

As for the Matebook 13’s other input devices, the touchpad is slightly larger than on previous Matebook models, Huawei says. It’s definitely roomy, but a bit too clicky for my liking. I’m expecting it to improve with age, as the springs loosen a tad. 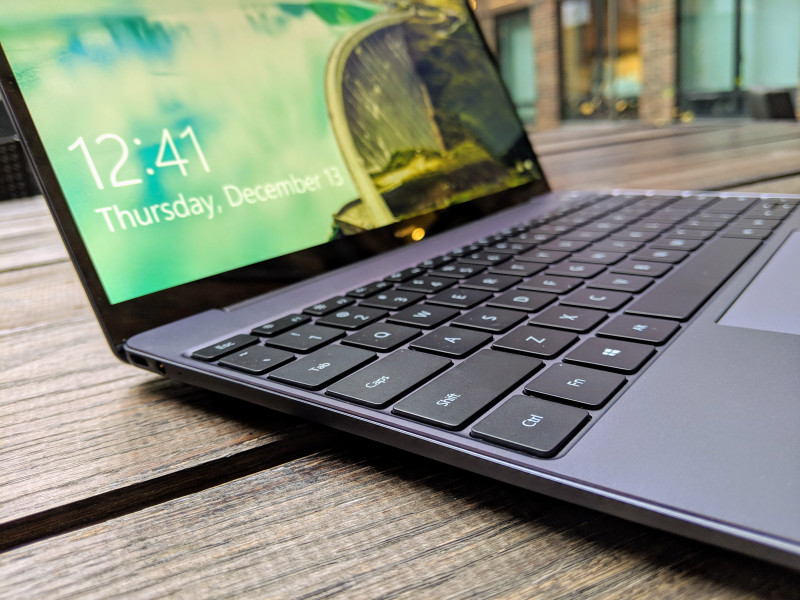 The One Touch power button doubles as a fingerprint sensor, and it works flawlessly — a swipe wakes the laptop from sleep, or logs you in if you opt into Windows Hello. It’s a step short of facial recognition, which would be faster, but still a great time saver compared to a password or PIN code.

When it comes to I/O and wireless, the Matebook 13 is equally well-endowed. There’s a 3.5mm headset jack and microphone 2-in-1 jack and two USB-C ports — one that handles data transfer and charging duties and a second that’s reserved for data transfer and display out via DisplayPort. (Neither has Thunderbolt 3.0 capabilities, unfortunately.) And the wireless chipset supports dual-band 802.11a/b/g/n/ac networks and works with Bluetooth 5.0.

The USB Type-C charging port, it’s worth noting, has overheat protection and embedded quick charge tech that provides up to 2.5 hours of “everyday” office use with a 15-minute charge. Huawei claims that its proprietary battery and process management system can eke out 10 hours of HD video playback, 9.1 hours of productivity workload, and 7.3 hours of continuous internet browsing from the Matebook 13’s 41.7Wh battery.

Those numbers are on par with what I saw — more or less. The Matebook 13 easily lasts a workday (8 hours) if the tasks aren’t too processor-intensive. That said, I wasn’t able to stretch it to the quoted 10 hours — even with brightness turned down to the minimum and Bluetooth disabled.

Key travel and other niggles aside, the Matebook 13 balances power and brawn in a package that’s slim enough to stuff into a backpack — or a manilla envelope, if you were so inclined. It’s an impressive showing and proof that Huawei can hold its own in a market of heavyweights.