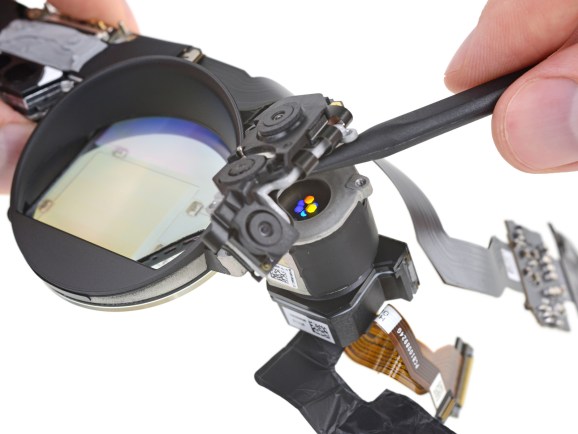 iFixit's teardown reveals a portion of the unique display technology inside Magic Leap One.

In 2018, augmented reality started to heat up as Magic Leap released its much-anticipated headset, paving the way for others to explore and support massive AR development on their platforms. AR continues to be a rapidly growing space, as more tech companies continue building out their own competitive technologies — including Apple, Google, Microsoft, and Magic Leap. The new year will be an important one for the software and hardware components of AR to shine. Here are some predictions for where we’ll see AR as we move into 2019:

With the launch of ARKit 2.0, we now have multiplayer functionality in mobile AR, which lets multiple people experience an AR scene together. In 2019, we will see more interesting functionalities to AR including the ability for objects to stay fixed in a specific area. Perhaps even the digital 3D characters can interact with each other and/or with tangible objects in the space (like a pony jumping up and down on a couch or two AR objects dancing together).

As more consumers move to better smartphones, we’ll see a surge of AR in mobile. AR-enabled phones will continue to be the easiest access point for everyday consumers to experience AR. Hardware will not only become cheaper and more accessible, but also faster with less side effects, such as the heating up and draining of the battery power. As far as Android AR enabled phones in 2018, there was a jump from 100 million to 250 million when it comes to Android ARCore devices. Apple also saw 380 million iPhones with ARKit capabilities by the end of last year. With both Android and Apple devices seeing large numbers of adoption to their newest phones, AR usage will continue to exponentially grow in 2019.

3. AR advertising will become a thing

This year, we’ll start to see AR objects and banner ads on our devices that will be pretty compelling for users. AR will open newer, more intimate approaches to people seeing and learning about marketer’s products — even down to how an item might look on their body or in their home. 2019 could potentially be the first year and starting point for brands and publishers to get in on the action as AR offers a fresh and more interactive way to reach audiences.

A very futuristic video of how our realities might be in the future when it comes to branded content and/or advertising can also be seen here. Of course, this specific form will have to wait until a new glass platform is made and cool enough for mass users to wear them.

4. The camera becomes a platform

We predict Apple and Google will build out a platform around the smartphone camera in order to deliver a better, more creative way for users to have easier access to camera enhancing apps. Much like iMessage and Gboard, developers will be able to build extension apps around the camera, easily accessible for users to enhance and engage with features to augment their videos and photos.

As AR progresses past 2019, we’ll continue to see AR integrated more seamlessly in our lives. Once we move past the early entertainment/novelty phase of AR, we’ll start to see real utility of AR and daily use cases in our lives. On a more creative level, we’ll begin to replace expensive and large tangible objects with digital ones. We’ll be able to access any object we want, in just seconds on a much cheaper scale for everyone globally to enhance their life.

For example, instead of decorating your living room dinner table with a large bouquet of real flowers that don’t last long and end up smelling bad as they rot in just a few days, you will purchase an AR bouquet in seconds that can change colors every three minutes or completely change the flower type so that every hour it appears like a brand new bouquet.

To get even wilder, many people might opt for a digital pet to replace their pet or to avoid all the inconveniences that come with taking care of a real pet. Instead, you have a digital AR pet with all the emotions and physical looks of a real pet, but without all the feeding and cleanup responsibilities. Not only does this pet appear and act as if it were real, it could be a much more extreme and unique pet like a baby dinosaur or pet dragon that grows just like any other animal in the animal kingdom. This AR pet can even share emotions and smartly notice when you’re happy or sad and can react appropriately. Wouldn’t that be pretty entertaining?

Overall, 2018 was a big year for AR as big players joined in the game in the race to own the augmented reality space. As AR continues to attract more investments, business development and signs of market spend, AR will continue to grow in 2019 and beyond. The impact AR will have in the years beyond 2019 will change drastically, as soon as AR moves away from the mobile environment it is today, to a more wearable glass that has the capabilities to enhance every inch of space that you can see. We’re already excited for all the new advancements in AR and can’t wait for this new generation of video augmentation and enhanced environments to impact our lives on a global scale.

Dana Loberg is co-founder and CEO of Leo AR, the first augmented reality communications platform that gives people the power to enrich the world around them using 3D and 4D animated objects and photogrammetry.