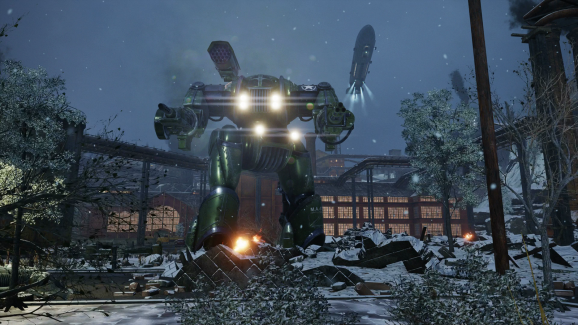 That airship is the chef's kiss for this mech shot.

World of Tanks already deals in some heavy metal. You don’t get much beefier than tanks, after all.

This week, Wargaming released a special in-game event for World of Tanks: Mercenaries, the console version of the free-to-play team shooter. In Core Breach, you strap into giant mechs instead of tanks. It seems natural fit, as mechs fill the roles of tanks in so many games such as BattleTech and MechWarrior.

It’s also a good fit for Wargaming because its Chicago outpost includes members of the Day 1 Studios team who created MechAssault for the original Xbox, heralding the company’s move into consoles. I had a short email chat with TJ Wagner, the executive producer for World of Tanks: Mercenaries and also an old mech-head. Here’s an edited transcript of our interview.

GamesBeat: How does this compare to the Space Battleship Yamato event that we saw a couple of years ago in World of Warships, which was a fun, no-risk celebration of the classic anime?

TJ Wagner: This is just good ol’ fun, mech-on-mech action. No need to worry about progression or upgrades, just jump in battle, destroy or get destroyed, and respawn. [So it’s much like the Yamato event — Ed.] It’s really designed to be just a little fun for our players and our staff.  You can, of course, earn resources like silver and XP that will carry over to the regular game. But in the end, it’s just a fun mode for players to enjoy. Above: Even the weapons get a mech makeover.

GamesBeat: Are the mechs based on any franchise or story out there, or did Wargaming brew these beasts up itself?

Wagner: These are our own design. We sat around and thought about how people in WWII would imagine mechs – and went from there. We also looked at sci-fi movies and books from the era, and came up with these two massive beauties. If you look closely you can see the parts are inspired by WWII planes and tanks, and that the metal sections are riveted on for a truly retro-effect.

GamesBeat: How long has it taken to put this together? Did Chicago get help from other studios, or did it pull this off without help?

Wagner: A very small team in the Chicago-Baltimore studio put this together. It took roughly five people working on and off between “tank” tasks over a few months. Although nearly everyone in the studio helped playtest … because, after all, we love mechs.

GamesBeat: Was this Chicago’s idea?

Wagner: Chicago and Baltimore. Some of the longtime employees that worked on the original MechAssult, including myself, are still here, and it was just felt like something we had to do at some point. City-scale mech battles are in our blood

GamesBeat: Did you ever pitch a mech game to Wargaming?

Wagner: It’s come up a few times as “wouldn’t it be cool if…” and finally we just made this mode. You can think of it as an internal pitch in a way, and we’d love to make a new mech game someday. It might help if you tell everyone you know to play it so we have really strong numbers to show to the execs and say, “See! People demand this!”