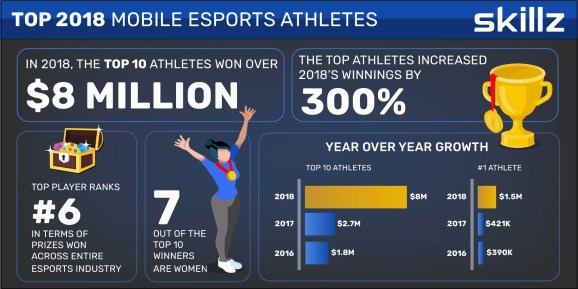 Skillz has stats on mobile esports champs for 2018

Mobile esports provider Skillz said that the top 10 mobile esports players earned more than $8 million in 2018, with seven of the 10 rankings claimed by women.

The prizes earned by this year’s winners were three times larger than that earned by 2017’s top players, which is a good sign of the growth of esports in the $70 billion mobile game market.

“When I first started competing on the Skillz platform, I never realized this was something I could do professionally,” says Jennifer Park (jpark87), a college engineering student from Westland, Michigan. “The prizes I’ve earned from playing Skillz games have helped put me through college.”

As the industry’s revenue has increased, competitive gaming prize pools have also grown. Prizes from esports tournaments such as Dota 2’s The International topped $25 million last year, now exceeding those of prestigious offline sports events such as racing’s Indianapolis 500 and pro golf’s The Masters.

According to eSportsEarnings.com, global esports prize pools grew 31.5 percent from 2017 to 2018. In comparison, the top 10 Skillz competitors generated over a 300 percent year over year increase in prizes won, with the top player ranking No. 6 on the list of highest-earning 2018 athletes across the global esports industry.

“Top mobile eSports athletes bring the same inspiring dedication you see in world-class NBA or MLB players to our increasingly digital world,” says Andrew Paradise, CEO and founder of Skillz, in a statement. “Similar to how radio and television revolutionized the future of sports, Skillz is using mobile technology to do the same for esports.”

Skillz reported it doubled its revenue run-rate twice in 2018 to a current total of over $400 million.

The top Skillz competitors are ranked based upon total tournament prizes won by each player, excluding any entry fees paid to enter those tournaments.