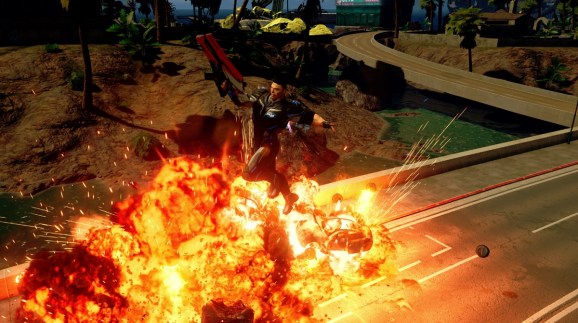 Escape in the knick of time.

Microsoft is standing firm on its pledge that Crackdown 3, which was first shown to the public in 2014, is coming out for Xbox One and PC on February 15. And I could pretty much vouch for that, since I was able to play some of the single-player campaign and its four-versus-four multiplayer combat mode, dubbed the Wrecking Zone.

Fans have been waiting for this for a long time. Like the earlier games, it is full of neon art and bombastic gameplay from the likes of characters like a digital version of Terry Crews.

Crackdown 3 is a follow up to 2010’s Crackdown 2 and 2007’s Crackdown. Your job in the pulpy campaign is to be a “superheroic agent of justice ripped out of a comic book,” said Joe Staten, creative director at Microsoft Studios on the game, in an interview with GamesBeat.

“It feels like a modern open world game, but it still has this classic Crackdown pulpy sandbox of fun that doesn’t take itself too seriously,” Staten said.

The game comes with a 15-hour-plus single-player campaign where you get to play as an agent in the open world of New Providence, a neon-lit city controlled by the mysterious organization Terra Nova, which has built its own company-owned city-state on an island. It has working-class districts and places for the super wealthy, but apparently everyone can afford multicolored neon.

One by one, you take down the crime bosses of the city and solve its mystery. You can play one of 21 different agents, and switch between them at any time you come across supply points in the city. 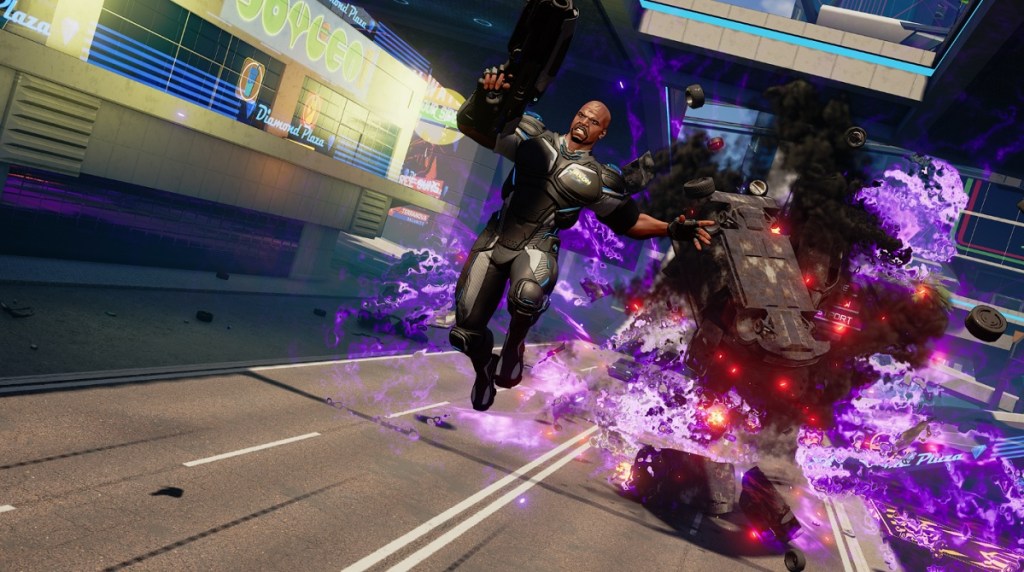 Crackdown 3 has been in the works for years and has suffered multiple delays. The original Crackdown came out for the Xbox 360 in 2007 and sold over 1.5 million copies. Crackdown 2 followed in 2010, and Microsoft announced it was working on Crackdown 3 as a cloud-based game in 2014. But a scheduled 2016 launch date came and went, and the years dragged on.

Part of what took so long was the ambition to add cloud processing to the game. The multiplayer zone has complete destructibility because the player’s machine can reach out on the cloud and tap Microsoft’s Azure technology, allowing a single machine to use the resources of many. That took a while to accomplish, Staten said in our interview. Now that wait is almost over.

Crackdown 3 will be part of Xbox Games Pass, a subscription service that costs $10 a month. I played it on both the PC and the Xbox One. 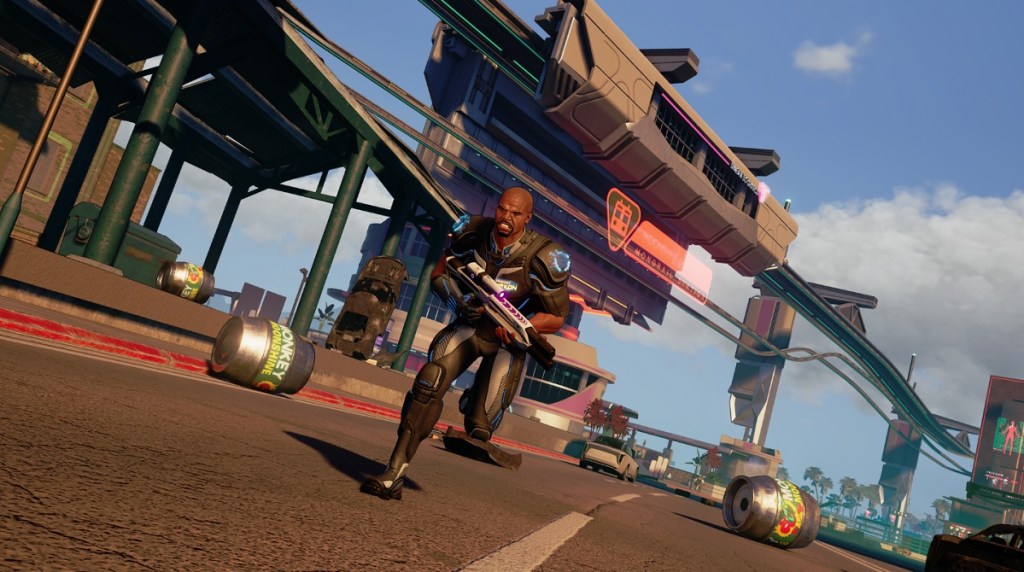 Above: Crackdown 3 lets you roam the city as an agent of destruction.

A superhero game that doesn’t take itself seriously

If the Marvel universe has an analog for Crackdown 3, it’s Deadpool. When you blast enemies with a rocket, civilians on the streets with scream and the enemies will fly backwards with the blast. But you’ll collect their goodies in a colorful wisp and move on to the next prey. Terry Crews motivates his fellow agents with the voice of a Marine instructor, and you can drive heavy vehicles over other cars if you like.

While the single-player environment isn’t fully destructible, you can destroy a lot of things in the game. When you take out an enemy, the narrator says, “I’m just going to assume that was necessary.”

The destruction in multiplayer

Staten said that the full Havok physics engine runs in the Azure cloud in multiplayer mode, dubbed Wrecking Zone. That means that objects in the world have realistic physics, or realistic for a comic-book universe. So if you shoot a rocket at something, it will punch a hole in that thing, which could fall on a character and cause damage.

In the four-versus-four battles, you can destroy everything. Every building or statue can be blown up. But you can also hide in buildings when enemies get a bead on you. The enemy’s rocket may blow up the walls, but the damage isn’t likely to kill you. And so it’s a good strategy when someone has you targeted.

It’s a little hard to figure out where you’re supposed to go next in the campaign. On the other hand, you can go anywhere. You can choose to fulfill different single-player missions in any order you wish. And if you cause enough destruction in an area, the boss will come out and hunt you down. I liked being able to go anywhere and do what I wanted.

I didn’t get to try out everything, but I would love to just run around in this world with a grenade launcher and a rocket launcher. I got to one point in the game where I was supposed to shoot a big toxic gas-producing piece of machinery. But all I had was a machine gun, as you can see in one of these videos. That was a cruel joke. But for the most part, I was happy with the array of weapons I could wield, including car-mounted cannon that could take out other vehicles. 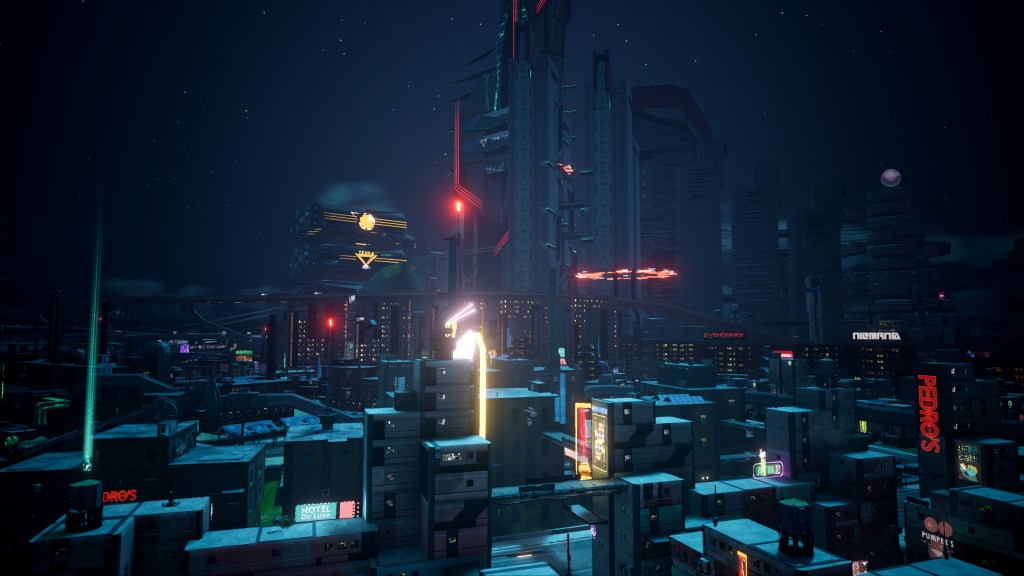 Getting lost in the open world

It’s not that big a city, but it isn’t a simple grid. So it’ takes a while to figure out how to get from one side of the city to another. Even with waypoints, your path isn’t spelled out so easily for you to follow. I had to go to the other side of town, so I looked for a straight shot to get there, and I couldn’t find one. I had to figure out which elevated overpass to take.

You can hit some of the tougher enemies with grenade after grenade. They’ll fall down and get back up, forcing you to launch a few more grenades at them. You can shoot them and watch them go through a death-like fall, only to see them get right back up and shoot at you. Yes, I can appreciate game difficulty, but enemies that can take a bunch of grenades seem like their main purpose is to run me out of ammunition.

Crackdown 3 is a lot like living in a comic book. You are always awash in a sea of colors, and you have no shortage of guns, ammo, and goons to shoot. If you’re looking for more than that, like an emotional story, this probably isn’t your game. It looked pretty polished and I saw no significant bugs, though I hope they keep working on reducing the loading times. Crackdown 3 will be good for a laugh and blowing things up. To see how long that will last, we’ll have to play the final game.