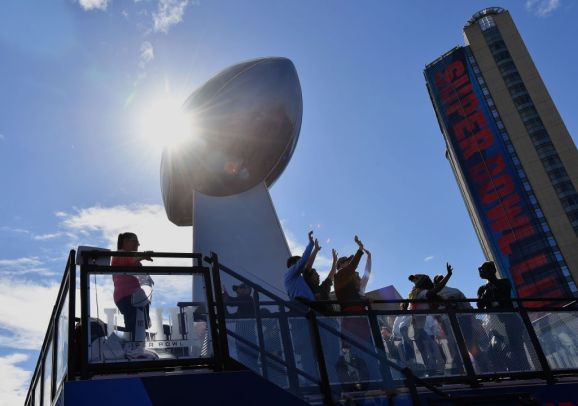 Fans dance during the Super Bowl Experience in Atlanta, Georgia on February 2, 2019. The New England Patriots will meet the Los Angeles Ram at Super Bowl LIII on February 3rd.

By now, you may have already seen commercials with the Alexa hot tub and Harrison Ford’s dog or the Home Alone remake with Macaulay Culkin, Joe Pesci, and Google Assistant.

For AI assistants from tech giants like Amazon, Google, Apple, and Microsoft, the Big Game is a marketing blitz. It’s also when companies tend to roll out new features or highlight ways their assistants can appeal to sports fans.

In the spirit of the game, here’s a play by play of how Siri, Alexa, and other intelligent assistants can talk about Super Bowl LIII.

With Amazon hailing from Seattle, Alexa is a well-known Seahawks fan, but Alexa predicts the Patriots will win today. Siri and Cortana also predict a Patriots win, while Google Assistant is rooting for the Rams. More on that later.

Alexa will also compare players: For example, you can ask “Who’s better: Tom Brady or Patrick Mahomes?” and Alexa will offer an opinion and share some statistics for context.

Alexa may follow up by asking if you’re interested in hearing a Tom Brady interview from the NFL Alexa skill.

There are also a number of existing features that can be used during the Super Bowl. My hands-down favorite has to be the creation of Routines. Using Routines — customizable ways to carry out multiple tasks at once — and the Alexa app, you can play the Patriots or Rams team song each time they score a touchdown just by saying “Alexa, touchdown!”

The same can be done with an Echo Button.

There’s also The Rookie’s Guide to the NFL, an Alexa skill from the National Football League that can lay out the basic rules of the game.

Of course, if you own a Fire TV, you can say “Alexa, play the Super Bowl” whenever you’re ready to watch the game.

Siri is sometimes referred to as the least intelligent of the intelligent assistants, but it can answer a robust number of questions about the Super Bowl — and sports, in general — thanks to an initiative that has been under development at Apple for years now.

Siri can handle the basics, like telling you where the Super Bowl will be held (Mercedes-Benz Stadium) and offering up the Rams’ and Patriots’ records, as well as things like what year Tom Brady was drafted and the college a specific player attended. And it can respond to questions about both team rosters, like “Who are the starting wide receivers for the Rams?”

I know fantasy football season is long gone, but if you’re interested in the performance of an individual player, you can ask for live updates during the game. Ask with your iPhone, and you get a pretty stats card with a photo and high order statistics.

Siri can also fill you in on Super Bowl questions unrelated to sports, like who’s singing the national anthem or performing during the halftime show.

Earlier this year, Siri got an upgrade to its sports intelligence, with results for NASCAR, F1, and Indy 500.

Saying “Hey Google, help me talk like a football fan” will prompt a kind of funny list of tips from Google Assistant aimed at helping you sound like you actually watch football on a regular basis. These include recommendations like: “After each touchdown, yell ‘Go for two!'” or “If the game’s not going your way, try saying ‘If people knew how to manage the clock, they wouldn’t be in this mess’.”

Ask questions on an Android smartphone or smart display and each Super Bowl query will come with suggestions.

While the other assistants offer a prediction of who will win the game based on the odds or a shrewd analysis of both teams’ records, Google Assistant takes a lighter approach. Ask a Home speaker or Android smartphone who will win the game, and it will tell you it chose the Rams because they’ve got blue and yellow in their logo, and that’s half of Google’s logo, which is red, blue, yellow, and green.

Microsoft’s Cortana uses intelligence from the Bing search engine to provide answers to questions. The Bing Predicts feature surmises that in order to win, the Patriots offensive line must do a good job of protecting QB Tom Brady and clear the way for RB Sony Michel, who has scored five touchdowns this playoff season.

During the game, stats and highlights can also be viewed on Bing.com.

Bing can get rather granular when it comes to offering statistics. With Cortana, you don’t have to just ask about stats from the regular season or playoffs, you can ask things like “Which NFL player had the most touchdown passes in the last two minutes of the playoffs this season?” or “Which NFL player had the most interceptions in the fourth quarter of the playoffs this season?”

Cortana has been making Super Bowl predictions for years, but these trends continue for good reason.

The sports tidbits and stats available through assistants affirm their intelligence for users, provide the base knowledge that makes it easier to talk about the game with your friends, and give each assistant the opportunity to demonstrate a personality. The jokes and snappy replies sometimes heard from intelligent assistants were created by dedicated personality teams, which are sometimes staffed by writers or comedians.

To remain part of the conversation around major events, AI assistants have in recent years developed ways to talk about not just the Super Bowl, but also the Academy Awards (Really, Alexa? La La Land for Best Picture?), March Madness, and the 2018 U.S. elections.