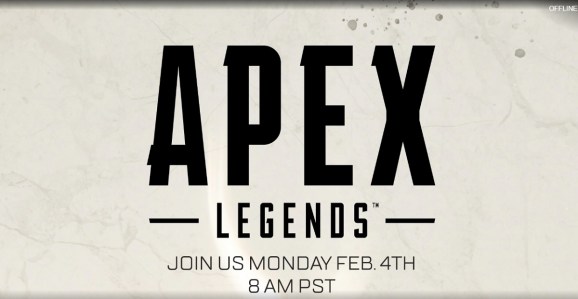 Apex Legends is a new game coming from Respawn Entertainment.

The reveal will be livestreamed on Twitch starting at 8 a.m. Pacific time on Monday. Zampella said, “Looks like everything is unlocked now? Fun. So if you like Respawn, our games, or even me, you should tune in tomorrow. Our stream starts at 8 a.m. PT and we’ll tell you everything about Apex Legends. Everything.”

Over the weekend, stories leaked that Respawn was going to launch a free-to-play battle royale shooter game, set in the Titanfall universe. YouTuber The Quartering dropped the first rumor on Friday, followed by other reports with more details. The game is rumored to have 60 players instead of the usual 100 in a battle royale title. And it will have three players per team. The game won’t have any Titan mechs, according to the reports, and it will run on a modified version of Valve’s Source engine.