I got a first hands-on driving session with Crash Team Racing: Nitro-Fueled, the latest retro game revival from developer Beenox and publisher Activision.

Last year’s Crash Bandicoot N. Sane Trilogy was such a hit that franchise owner Activision released Beenox long enough from its Call of Duty work to create the latest Crash Bandicoot kart racing game. The new game debuts on June 21, just a year after the previous title that started the retro return of Crash. It will be the 20th anniversary of the original title.

The game features remastered high-definition or 4K art that is all built from scratch, said Stéphane Gravel, a production director at Beenox, during my hands-on preview demo of the game. The game has 18 tracks, all based on the originals, as well as the same characters and game modes.

The game is meant to give players an authentic Crash Team Racing experience. I didn’t play the original when it came out in 1999, as I was much more of a PC gamer in those days. But since it closely resembles Mario Kart, my muscle-memory kicked in partially when I picked up the controller for the first time. By my third time playing the first track, Crash Cove, I was able to come in first place.

You can choose from characters like Crash Bandicoot, Coco (Crash’s sister), Dr. Neo-Cortex (Crash’s nemesis), and Dr. N.Gin who drive karts that are built for acceleration. Pura and Polar have karts with good handling. And Tiny Tiger and Dingodile have karts that are built for top speeds but bad turning. Nitros Oxide will be a playable character from day one. Players can also race with Oxide’s Hovercraft, space-themed skins for Crash, Coco, and Cortex, and more.

On the PlayStation 4, you just hold down the X button to hit the gas, and you control the kart with the right stick. You can do a power slide around turns to keep up your speed as you change directions.

The first track, Crash Cove, was fairly easy to navigate. I used that time to remember how to crash into boxes, make turns, and use the special items that I picked up. I liked the rolling balls and the rockets, which roll ahead and knock out a rival who is straight in front of you. 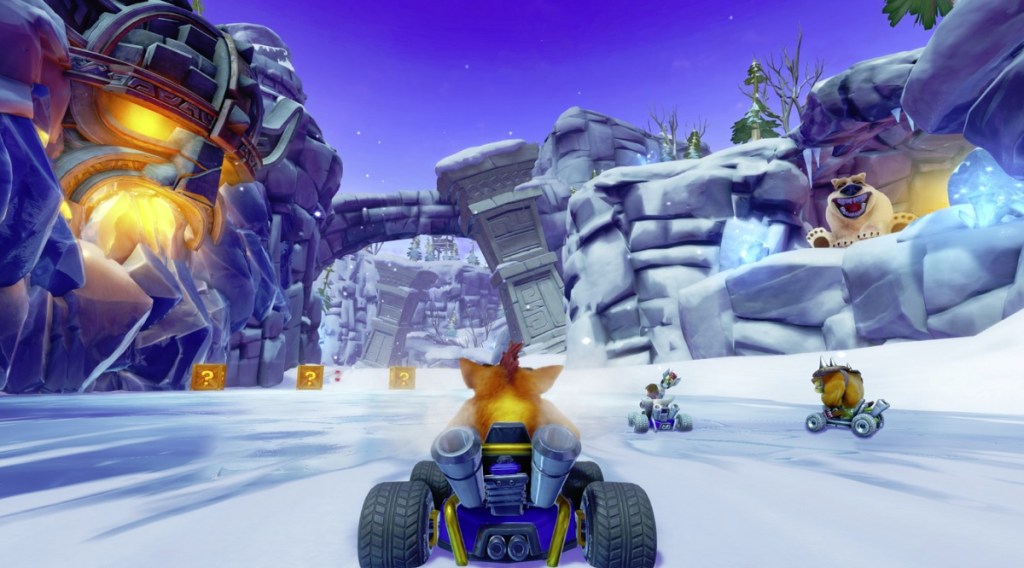 When you hit the left or right bumpers, you can jump upward slightly. That comes in useful when you are going over a ramp or a crevice. There’s a spot in the Polar Pass track where you have to do this or you’ll drop into the icy waters below. There’s also a treacherous, narrow wooden bridge to cross.

Polar Pass was a difficult track with a lot of turns, and I happened to play that with Dingodile, whose kart has lousy handling. Naturally, I wasn’t able to win any of my three attempts at the game, as I kept crashing into things or getting stuck with TNT or seals that periodically moved across the track sideways.

I also played a couple of split-screen races with Gravel on the Polar Bear track. He did better than I did, but he’s a developer for god’s sake.

This game also has an online multiplayer mode where you can race against other humans. Other modes include Adventure, Single Race, Cup Race, Time Trial, and Battle. I didn’t get a chance to try multiplayer online.

The game will debut for $40 on June 21 on the Xbox One, Nintendo Switch, and PlayStation 4. Crash Bandicoot N. Sane Trilogy sold more than 2.5 million copies in 2017, and Activision released another retro title, Spyro Reignited Trilogy, in November 2018. At this rate, Activision will have more retro titles than new titles.