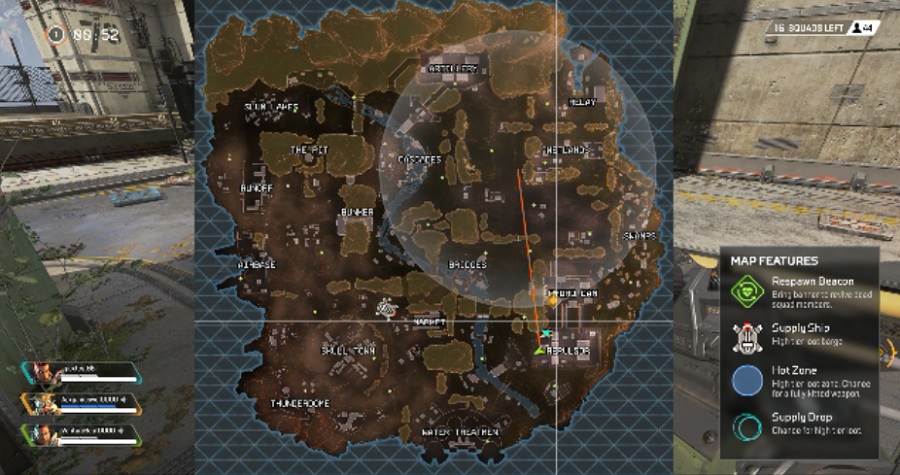 Above: Overhead view of the map in Apex Legends.

GamesBeat: Is this cross-platform for people playing against each other?

McCandlish: At launch we’re on Xbox One, PlayStation 4, and PC. They play independently with their own independent progression. But they’re playing the same game. We’re not cross-platform at launch. It’s definitely an area of opportunity.

GamesBeat: What do you notice about people when they get really good at this? What are some of the patterns in how they play?

McCandlish: One of the challenges of making battle royale is you have a lot more players. That means you need a lot more people to make a playtest work. Leaning against EA’s resources, we’ve been able to spin up a lot of players. You’ve been playing with them today. When they started off, they were new to the genre. The genre is still new. It was like sharks and guppies. But they’ve gotten so good now after playing it. It’s a real skill challenge. It’s another opportunity in the battle royale space. How do you get the right players together to have the best possible experience?

GamesBeat: Do you have any regrets about not going toward Titanfall 3, as opposed to this?

McCandlish: We love the universe. We love the gameplay. We love the cinematic, but creative fun that we found with the Titanfall 2 campaign. But we also felt like it would be very hard to one-up that achievement. Part of what made Titanfall 2’s campaign special was nobody saw it coming. It was a bit beyond imagination that someone would make a campaign that brought wall-running into a playable, believable, completable space.

We’ve explored what it would take to one-up the Titanfall 2 campaign. After some time, it made a lot more sense to put that energy into Apex Legends. 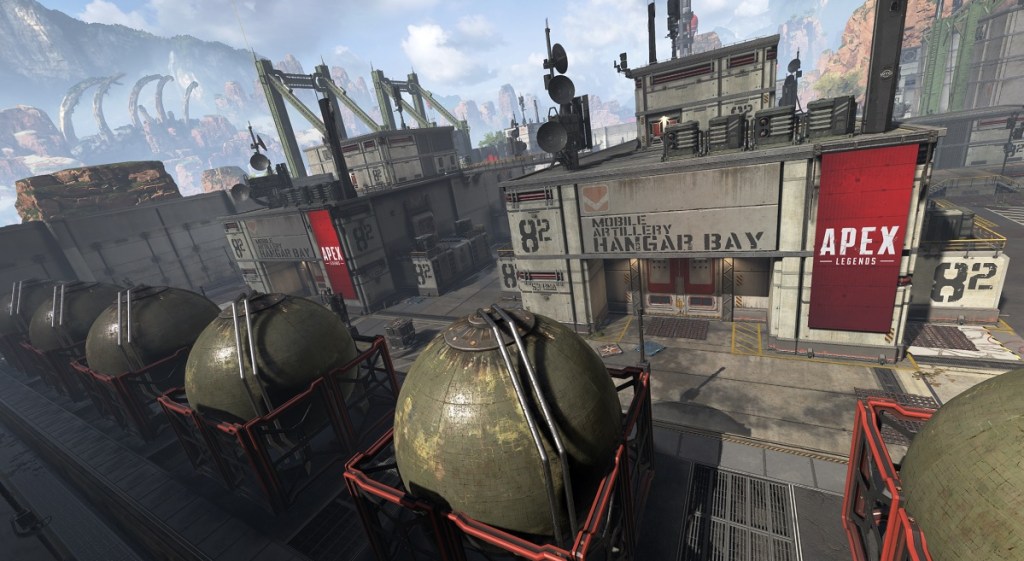 Above: Apex Legends map has a lot of big buildings.

GamesBeat: The Wraith character, is she a time-traveler sort of thing? Is there a relationship between what she can do and the time travel that happened in Titanfall?

McCandlish: Yes. She’s an interdimensional traveler. She goes through her portals. It’s allowed her to live multiple dimensional lifetimes. That’s manifested as a little bit of loss of her grasp on reality. She hears the voices of these alternate timelines and listens to them to get a hint of what will happen in the next encounter.

GamesBeat: But she’s not actually able to time-travel?

McCandlish: No. She can create a portal. She can step out of the dimension a little bit. You’ll notice that when she phase shifts, she sees images of possible futures. They’re not the actual players that are there. They’re possible players. It’s a little bit like–what’s the name of it? Demon’s Souls, when you see where other players have died. She’s seeing all these possibilities and it’s manifesting as actual gameplay.

GamesBeat: One of the things she can do in the other world, she can spot other players?

GamesBeat: The trailer kind of threw me on that.

McCandlish: Yeah, I think that in her trailer she comes off as being more of a god.

GamesBeat: Does she have some vulnerability that balances that?

McCandlish: She does. When she’s phase-shifting she leaves a trail in the world that other players can see. Also, when she comes out of phase shift her gun isn’t up. It comes back up. If I’m a player, I hit Wraith and she goes into phase shift to react. Then I start thinking, “OK, if I’m her, where do I go from here? I’ve played this map a million times. I’ve played Wraith a lot. She’d probably go here, unless she thinks I know she would go there.” It turns into a bit of Princess Bride. Which cup do I drink? Where you want to be is standing where she’s going to be, so you can shoot her before she has her gun back up.

GamesBeat: Does every character have that kind of plus and minus?

McCandlish: Here’s the other thing. The permanents that the characters place in the universe with their abilities, they’re team-agnostic. When Lifeline puts a drone down, it’ll heal anybody that walks by. You can hear a Lifeline healing around the corner, shoot her drone, and take her drone to let it heal you. You can see a Wraith portal and travel through it to kill Wraith. You can use Gibraltar’s shield for protection.

GamesBeat: I was worried about that, the gas.

GamesBeat: There were a couple of things I feel like I should have learned now. For the life of me I can’t figure out where the high loot area is. Is that always the same? Is there something that should be obvious to me?

McCandlish: If you’re not sure, then yes, it should be. That’s on us. But when you look at the map, there’s a circle that says Hot Zone. That’s always going to have extra weapons and one extra powerful weapon. If you look at the little supply ship that’s flying around the map, you can land on that from the drop. It always has extra high-tier items. On top of that, any time you go into a zone, it says the name of the zone and it describes the tier of the loot just below that. “Purple – High-Tier Loot.” Okay, I should drop here and get some loot.

Above: Gibraltar is the heavy tank of Apex Legends.

And on top of that, there are a couple of key locations on the map that always have a better item on them. There’s the building in the swamp that has the Apex banners on it. There’s always good items in that building. The Thunderdome in the middle always has good items. Those are the ones you learn over time. But the big ones are, the Hot Zone should be obvious and the supply ship should be obvious. When you land, learning those names and how it says what’s there should be learnable, if we’re doing it right.

GamesBeat: I felt like I was spending too much time looking at loot and trying to decide.

McCandlish: I’d encourage you to just pick them up and have something. Then you’ll get used to it over time.