French video game publisher Ubisoft showed off hours of content for Tom Clancy’s The Division 2 at a preview event that I attended last week. The game debuts on March 15 on the PC, PlayStation 4, and Xbox One, but Ubisoft is starting to show private betas of the game starting on February 7.

At the outset of the campaign, I found it to be tougher than I expected and not because the enemies were “bullet sponges” or able to take a clip of fire and still keep standing. The enemies ducked under cover when I fired at them, and then they tried to outflank me by moving while I was pinned down. It took a few deaths and respawns for me to reach my first destination, the White House.

The Division 2 takes place about seven months after the timeline of the previous game, Tom Clancy’s The Division, which debuted in 2016 and focused on midtown Manhattan. In that game, a plague that was embedded in infected money spread throughout New York, resulting in chaos. The special agents of a secret organization known as the Division are tasked with restoring order. For the better part of a day, I played The Division 2 demos on a Windows PC. 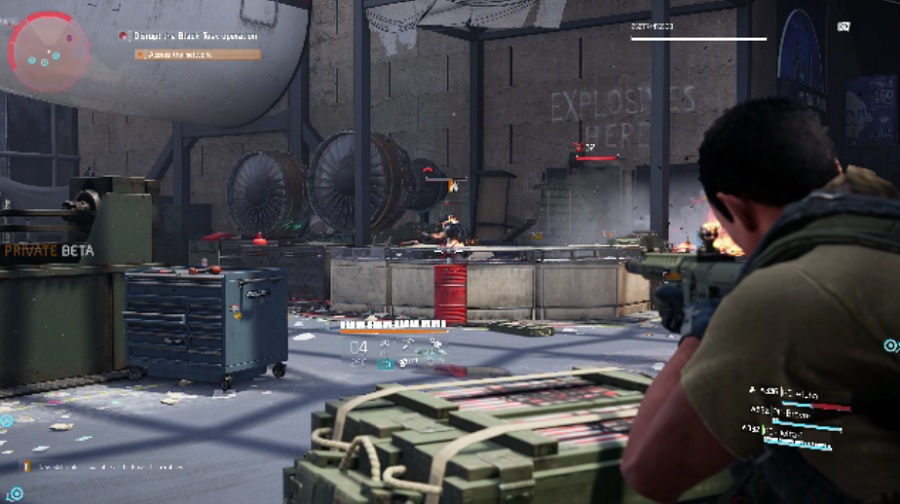 Above: A firefight at the Air and Space Museum in Washington, D.C., in The Division 2.

But the plague has spread across the nation, and now, you start out by defending your base of operations in the White House. As agents, you have to venture into a transformed Washington, D.C., unlocking new skills and abilities while upgrading to a level cap of seven. The world is on the brink, its people living through the biggest crisis ever faced in human history. As veteran Division agents, players are the last hope against the complete fall of society as enemy factions vie for control of the city. They must restore order. If Washington, D.C., is lost, the entire nation falls.

With those high stakes, you make your way into the White House, where agents have set up a base of operations to take D.C. back. I had to level up my weapons and abilities, so I could carry a couple of weapons. Then, I joined with three other players that I played with for the bulk of the day.

Julian Gerighty, creative director at Ubisoft, said in an interview with GamesBeat that the map area of D.C. is 20 percent larger than that of the prior game. It is mapped exactly, but it doesn’t look like D.C. because of months of greenery growth, huge amounts of litter, and the presence of bodies and burned cars. Homeless encampments are plentiful. Swamp water covers much of the city. Nature is already taking back the city, Gerighty said.

Each time you finish off some enemies, you collect some loot, which includes customizable weapons, armor, and cosmetics. When you complete missions, you pick up skill points. I used my skill points to unlock a “seeker mine,” which rolls out in search of enemies and blows them up. Other skills include assault drones (which assault and dislodge enemies in cover), chem launchers (which spray toxic chemicals), and hives of small drones. 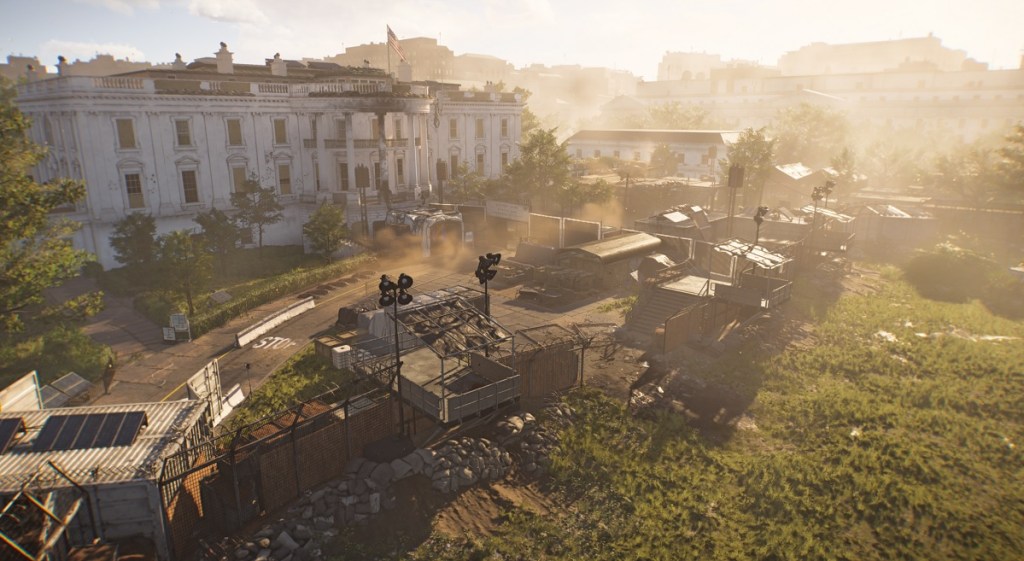 Above: The White House is your base in The Division 2.

The game will also come with three Dark Zones, where players can square off against the environment or each other, but I didn’t get to check that out yet. With the open world, I didn’t have to go on missions. Every time you go outside the base and clear an intersection of bad guys, you’re doing some good. That’s because you force the enemies back and stop them from encroaching on your position or civilian holdouts. The more you can push them back, the better you and your allies will become. Whatever you choose to do will help the cause.

And when you gather enough resources, you can upgrade your settlements and see what kind of impact it has on the rest of the city. Eventually, your campaign mission becomes to push the other factions back and liberate the city. If you do that, you can initiate fast travel between locations. You can also fast travel to your co-op partners’ locations, which is convenient when you get separated on the streets.

It’s always good to play with a squad of four since you get better loot and get revived when you go down. In one battle, I had to revive two players who a robot dog had downed. But they had to crawl to safety first. It was here where we started to see enemies who were more heavily armored.

Some of the enemies also just charged at me, trying to hit me with riot sticks. They were hard to bring down because they were bullet sponges, but I had to pay attention because they could close on me quickly. It was hard to do, but it pays to shoot the enemies in the head, as that takes them down more quickly.

For bosses, we had to shoot them enough to get rid of their armor, then shoot them more to bring them down. This is where grenades came in handy. When one of the big bosses walked out in full armor, we saw that we could chip away at his protection by shooting off pieces of his armor. We could take off his arm armor, for instance, and then weaken him by shooting at his unprotected arm.

We had an eerie feeling as we had visited the museum in Washington, D.C., and seen it in its better days. Now, it was a wrecked environment. One particularly hot firefight took place inside the small planetarium at the museum. We had to watch out for mechanical robot dogs that kept coming into the room. The enemies came in the doors and shot down at us from above. I had to duck for cover a lot.

This battle lasted for quite a while, as we had to go from room to room, clearing enemies out one at a time.

Your ultimate goal is to take back the U.S. Capitol, which is not far from the White House. But you can do it after you’ve completed a bunch of other campaign goals.

Ubisoft also showed off an “endgame” mission where you have to defend your city from an invasion by a new technologically savvy faction, the Black Tusks, that threatens to undo all the progress you made in the campaign. Ubisoft hopes to keep players coming back by doing periodic updates, as it successfully did during two years of updates for the original game.

The original game launched without such endgame content, which meant that the open world felt empty at the completion of the campaign. Some of the weapons you have access to at the endgame — a .50 caliber sniper rifle, a crossbow, or a grenade launcher — can make a huge difference in a firefight. 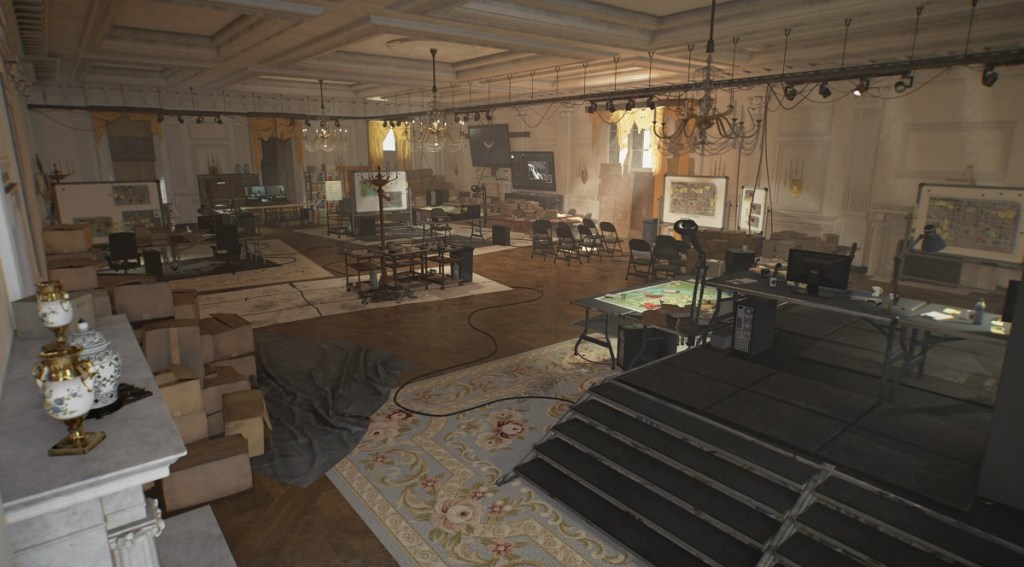 Above: The White House Situation Room in The Division 2.

“That’s not something we wanted at all in The Division 2. We created this living world system, which offers emerging gameplay opportunities when you run into a patrolling faction, or a bunch of civilians run into a patrolling faction,” Gerighty said. “That creates a bubble of activities. Or the activities that we’ve set, like the control points, or the living world activities like propaganda or hostage rescue.”

I enjoyed the hands-on battles, but they were exhausting. This is going to be a big game with a lot of content. You’ll have to find co-op partners who are in it for the long haul to finish the campaign. But if you want a shorter experience, head over to the Dark Zone for some PvP combat.