Back in 2016, the original Tom Clancy’s The Division had a rocky start with bugs and lots of player complaints. But Ubisoft’s developers at Massive stayed with it, fixing bugs and constantly issuing new content. Eventually, lapsed players came back, and the audience grew.

This time, almost three years later, Ubisoft drew on the development talent from multiple studios to make Tom Clancy’s The Division 2, which takes the post-pandemic world to the city of Washington, D.C. You start out with a small outpost at The White House, and then you take the city back, street by street, and monument by monument.

The Division 2 takes place about seven months after the timeline of the previous game, which focused on midtown Manhattan. In the original, a plague that was embedded in infected money spread throughout New York, resulting in chaos. The special agents of a secret organization known as the Division are tasked with restoring order.

Julian Gerighty, the creative director on The Division 2, said in an interview with GamesBeat at a recent preview event that the team learned from the original and planned ahead. It has a big game, but it is only 20 percent larger than the square area of New York in the original. And Ubisoft planned for more post-campaign content than it had before, so players will have a reason to stay.

I talked with Gerighty about this topic after playing The Division 2 for a few hours. Here’s an edited transcript of our interview. 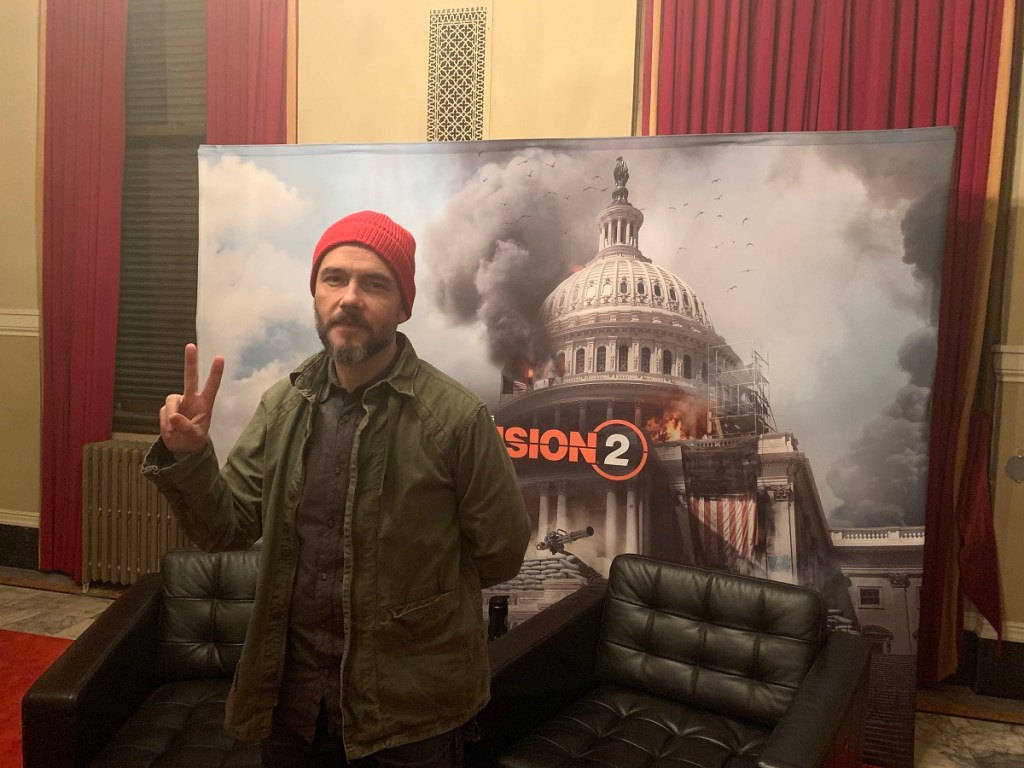 Above: Julian Gerighty is creative director at Ubisoft on Tom Clancy’s The Division 2.

GamesBeat: What was the main objective for The Division this time around?

GamesBeat: It definitely seems like the enemy AI is better than it used to be. How would you describe that, quantify that?

Gerighty: It’s one of our main focuses, taking things like the pure shooting and saying, “How do we improve this? How do we minimize this impression of bullet-sponginess?” To do that, it’s not just one thing. It’s several things that gather together. It’s making time to kill shorter for them and for you, too. It’s making animations and hits more visible so that there’s this impression of contact. Making behavior much better as well, more defined in each faction and between factions. Really, that basic building block of combat — if it’s not as fun as it is in The Division 2, then people won’t really play for too long. We really had to put a lot of emphasis and a lot of focus on improving that. 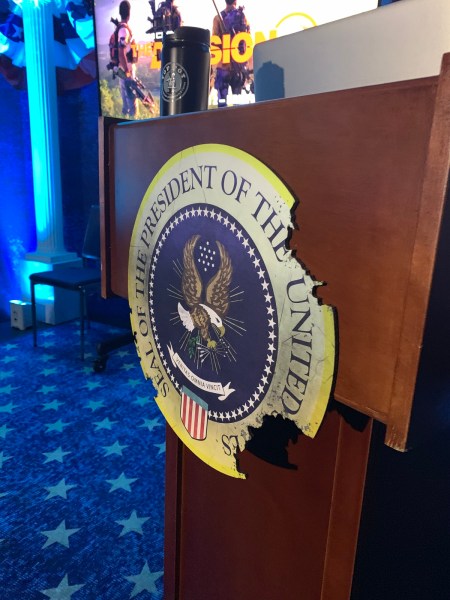 Above: Ubisoft’s props at its preview event for The Division 2.

GamesBeat: What about scope, how much bigger this might be compared to The Division at launch?

Gerighty: It’s difficult to quantify that, apart from things that are very factual — like the size of the world. The world is about 20 percent bigger than the Manhattan midtown that we released at launch. On top of that, we have real focus on endgame, which we didn’t necessarily have at the launch of The Division. We’ve taken a lot of things we did for The Division and thought, “How can we push this and make it into a better, more coherent experience for The Division 2?”

On top of that, we’ve really focused on adding much more activity and challenge within the open world. In The Division, the open world felt a little bit empty, especially at the completion of the campaign. That’s not something we wanted at all in The Division 2. We created this living world system, which offers emerging gameplay opportunities when you run into a patrolling faction or a bunch of civilians run into a patrolling faction. That creates a bubble of activities. Or, the activities that we’ve set, like the control points, or the living world activities like propaganda or hostage rescue. Did you play any of the control points?

GamesBeat: Yeah, yeah. If you’re taking those, then you’re limiting what the enemies can expand into, right? You keep the civilians happier.

Gerighty: Absolutely. And it’s all about resource gathering, which is part of necessary milestones in order to upgrade the settlements, to see that impact from your efforts on the world.

GamesBeat: So, it’s more dynamic. If you don’t do these things, they’ll encroach on you more.

Gerighty: Right. By the end of the campaign, one of your main missions is going to be to push these factions back. You’re going to have to engage into these — let’s say, non-mandatory activities.

GamesBeat: Does that somehow come back and affect the story that you’re going to experience? If you leave this world unattended, will things come back to you?

Gerighty: It’s definitely one of the major storylines, to push these factions back. It’s something that you’re going to have to engage with if you want to build up the settlements and push those factions back.

GamesBeat: You learned a lot about how to improve The Division over time. How do you make sure you have something good at the beginning this time?

Gerighty: I think it’s taking all of those lessons about improving over time and saying, “What can we do on day one that really pushes the envelope?” One example is the living world system, which we don’t have in The Division even today. But another could be the focus on endgame and what we’re going to show to you this afternoon. By taking one ingredient, one new ingredient, a brand new faction, and injecting that within the endgame as a surprise, you change the nature of the entire map. It’s injected in the living world system, but also, it’s integrated into all of the main mission. [The Black Tusks have] invaded, and it gives you a new reason to go and play.

The specializations, as well, these new skill trees you unlock at endgame, they’re really signposted by a signature weapon — a .50 caliber sniper rifle, a crossbow, or a grenade launcher. Those become new paths of progression for the players.

GamesBeat: What will we notice about bosses that’s different this time?

Gerighty: One of the most obvious differences is that a lot of the bosses have armor. You chip away at that armor. You see it breaking off, flying off, before you get to hit the gooey stuff at the center.

GamesBeat: If the armor on the arm falls off, you want to shoot that arm?

GamesBeat: How do you adjust depending on how many players there are, as far as difficulty?

GamesBeat: The deterioration of the world so many months later, how would you describe that?

Gerighty: It’s one of the things I’m the most passionate about, to look at a real-world setting and say, “We’re going to transform this completely.” It’s talking to researchers, to botanists, to people in emergency and disaster management. If this happened, what would a city look like? A lot of the vegetation that you see there is only around the places in the city where there’s a park or some greenery that hasn’t been tended at all. It won’t be in parts of the city where there’s no greenery to start because it wouldn’t make sense. That whole transformation, for me, is the part of the process that I enjoyed the most because it’s all about putting our own spin on a recognizable, credible world.

GamesBeat: So, it’s not quite as if people will recognize their apartment buildings.

Gerighty: No, 100 percent, they should be able to do that. This is one-to-one. If it’s in D.C., in the map we’ve recreated, there’s a great likelihood you’ll be able to recognize the streets. It’ll be transformed, though. It won’t be in the same condition [Laughs].

GamesBeat: As far as the team goes, is it very similar this time around, or did you change it?

Gerighty: This is the same core team that’s working on the game. It’s split over various continents. The team is led by Ubisoft Massive in Sweden, where I come from. We’re working in collaboration with Annecy in France, with Red Storm in North Carolina, with Reflections in Newcastle, and, of course, with Paris, and Bucharest for testing, Shanghai for art outsourcing. There’s a huge amount of different people working on this project.

GamesBeat: It feels like a short time, still, between the first game and this game.

Gerighty: It’s been a rush. It’s been very compact.

GamesBeat: It feels like the Assassin’s Creed formula. Those came out every year because you amassed multiple studios to do the work. It sounds like this got that kind of treatment.

Gerighty: There are multiple studios working on the project. If you think of the first game, that came out three years ago. It’s also the fact that it’s a live game that’s had a lot of attention, that we’ve supported for so long. It feels like a shorter amount of time. But three years is a significant amount of time.